Just Cause 3 is quite a ridiculous game. Now, don’t take that the wrong way – when I say ridiculous, I don’t mean it in a dismissive way, but in an affectionate one. You see, I love Just Cause 3. I love its excesses, its silly story, its comic physics. I love it despite its problems of which there are several. But let’s get one thing clear, if you didn’t like Just Cause 2, Avalanche’s 2010 Open World liberation simulator, Just Cause 3 won’t change your mind. 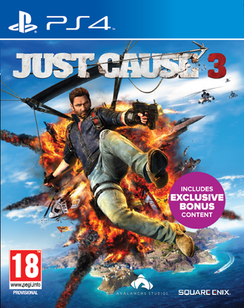 The story here is very much reflective of the previous games in the series; Rico Rodriguez, ace operative for covert organisation The Agency, is sent into a country ruled over by a ruthless dictator with the aim of helping a small group of rebels rise up and overthrow the corrupt government and restore order. This time, the country is that of Medici, Rico’s homeland, and the big bad is a ruthless general called Di Ravello. In many ways the story is similar to last years open world rebel-em-up, FarCry 4, but the similarities between the two games end there.

Just Cause 3 is played from a third person perspective ala Grand Theft Auto et al, and presents the player with the sandboxiest of sandboxes to explore. After a brief intro which teaches you the core gameplay mechanics, you’re given completely free reign of the map. The whole of Medici, a mediterranean archipelago made up of a series of islands of varying sizes, is visible from the world map with no exploration or watchtower climbing required to reveal new areas. While key landmarks require discovery, towns and other areas of interest are clearly shown as building outlines with the core facts filled in once you actually visit that location. Medici doesn’t feel as varied as, say, Skyrim or even the aforementioned FarCry 4’s Kyrat, but the crisp visuals and long draw distance is quite arresting and I often found myself stopping to simply admire the view. It’s liberating and, in a way, distracting as it’s quite easy to get lost exploring the islands and simply forget that there’s even a story here at all.

Outside of the main story missions, the key activity is that of liberating towns and overthrowing military installations. This is done by destroying key landmarks within that location; it’s pretty much a ticklist exercise – once all of the things have been blown up, the rebels swoop in and take control. Rinse and repeat until all locations in a region of Medici have been liberated. It sounds boring and repetitive and, fundamentally, it is; but the game throws so much fun into these mini (and sometimes not so mini when you go up against a full on military installation) assault missions that a play session can quite quickly turn into “Oh, just one more settlement then I’m done…”

A lot of the fun comes from the toys that Rico has at his disposal; unlike many games, these are doled out fairly early. Rico’s primary tool is his signature grapple that can be shot out, latched onto pretty much anything and used to pull Rico towards his target. This is not only handy for traversal but can help reach distant object such as pesky assault choppers that can be called in by Di Ravello’s men mid mission. This has been upgraded for Just Cause 3 by allowing you to attach a tether between two objects before reeling them together; in a simple instance, this can be used to pull over a billboard or statue, but it can also be used to hilarious effect by tethering enemy soldiers to one another, exploding barrels to vehicles and all manner of shenanigans designed with the express purpose of causing as much chaos as possible.

On top of the grapple, Rico also has his trusty parachute as well as a new wingsuit. The wingsuit is another top addition to the game and makes traversing the expansive islands even more fun. Use the grapple and parachute to reach the top of a high peak before opening up the wingsuit and diving freefall into a valley. It is, in a word, exhilarating, and once you’ve got used to how the suit works you’ll be gliding, grappling and soaring around Medici in no time.

The game also comes with a novel approach to the perk system so common in modern, RPG lite games. Just Cause 3 calls these MODS and has taken inspiration from the mod community that sprung up around the PC release of Just Cause 2. As you play side challenges unlocked by liberating settlements and overthrowing military bases, you earn gears which, in turn, unlock perks on the MOD trees. These can be activated and affect the game in a number of ways, from giving vehicles nitro boosts, to turning on down-the-barrel aiming to silly things like turning explosives into rocket boosters, allowing you to blast objects off into the distance. It’s a fun system to explore and opens up numerous ways to cause extreme destruction. And, oh, the destruction. Just Cause 3 has some incredible destruction. Explosions are lovingly rendered and can do anything from take chunks out of buildings to uprooting trees and even collapsing bridges. It’s moments when everything goes to complete hell that, once the dust settles, you just can’t help but giggle madly at all the absurd devastation you’ve caused.

But, let’s talk about the elephant in the room. It’s been widely reported since before release that Just Cause 3 suffers from some serious performance issues. We got our copy just as the game hit the shop shelves, so I can’t comment on performance prior to the day 1 patch but I did experience some issues. First and foremost, the game takes an absolute age to install. Seriously. Yes, you can drop into a sandbox within a sandbox called Boom Island and tool about, experimenting with the different tools and mechanics while the files are copied to your hard drive, but after 15 minutes I was bored of that and wanted to get my game on. One cup of tea later and the files were installed, ready to rock. Outside of that I’ve experienced variable load times often minutes in length, some frame rate drops, generally nothing too bad although I did have a serious slowdown issue when taking a base, as well as two instances where the game froze while reloading after a death. For me, these are disappointing but infrequent enough that they don’t detract from how fun the core game is, however they are issues and, as such, need raising.

All in all, Just Cause 3 is a very fun blast in a very open world. It’s visually quite stunning with some of the best long distance views and underwater terrain that I’ve seen on this console generation, has a lot of laugh out loud moments both scripted (David Tennant’s propaganda radio announcer is a highlight as he, unconvincingly, tries to repeatedly paper over the chaos caused by Rico and the rebels) and unscripted and controls intuitively. Unfortunately the glaring technical issues need to be addressed and, while I wanted to afford the game a 9/10, I’m going to have to bring the score down. If you can live with long load times and unstable frame rates, there’s a lot of fun to be had here, but if you want more polish to your games I’d hold out for a patch or price drop.