Whether it’s love, hate, or general indifference that you might feel towards them, there’s no denying that Grasshopper are a pretty rare breed of developer. At a time when many big-budget games are widely criticised for their lack of diversity and pandering, they’ve remained thoroughly creative and diverse in their output. That said, whilst not revisiting any previous game worlds explicitly, Killer is Dead puts the player in the shoes of an assassin going about his business – an idea quickly becoming something of a hallmark of the game’s executive producer, Goichi Suda. Come join us, as we see if this is flogging a dead horse, or perfection of the craft. 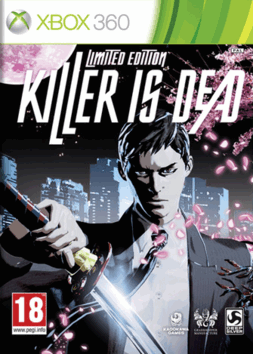 With a cybernetic arm-cannon and a name like Mondo Zappa, it’s really no surprise that your character is a videogame protagonist, is it? Memory loss renders dear Mondo unaware of his past beyond the point that he arrived on the doorstep of the assassins agency that he works for, and the game follows along as he undertakes a number of these jobs from a range of clients and inevitably starts to piece everything together. You’re carried along by an ensemble cast of support characters; head of the firm Bryan, femme fatale Vivienne, and bizarrely upbeat but equally-mysterious Mika.

The likening of the game’s plot to that of a “dark 007” has been shared by the game’s development team, and there’s no denying that on some levels it fits. Mondo is as much debonair and lethal as he is chauvanistic – yet this ‘dark’ side to the story is vastly removed from the supposed realism of Fleming’s own works. The story’s progression is unflinchingly lunatic and off-beat, sitting moments of a serious nature closely alongside those of comedy, and frequently flaunting total disregard to the fourth wall. Business as usual it may be for Suda, however it’s worth re-iterating and applying some caution to those who like their story-telling a little more straight-laced.

The game is frequently quite beautiful to look at; whilst the cel-shaded look may not be particularly ground-breaking, there’s been a noteworthy degree of thought having gone into creating the areas you travel through, and the world built up around it. Small factors have been considered too; such as the title screen, which is quite striking in its simplicity, and the interim scenes between mission selection and introduction – which prove equally slick, despite their insignificance. The level designs are neatly varied throughout the game’s duration too – whilst not quite as bright as previous title Lolipop Chainsaw’s candy-pop highs, an early stage layers a joyfully nightmarish pastel-toned Hansel and Gretel theme upon a house that has more than a hint of MC Esche about it. Whereas numerous other stages are more typically within darker, more moody locales, there’s still plenty to appreciate from a creative perpsective.

The foregrounds are what’s truly stunning though, with the fast-paced nature of the game being given a further shot in the arm by quick movements, exaggerated blood lettings, dazzling weapon clashes, and snazzy monochrome close-ups of the nastier, more dramatic moments. Whilst there are sporadic moments of quiet for you to take the environments in, the game’s at its best in all regards when the action gets frantic and almost beyond the point of comprehension. As per most games of its ilk there are moments of frustration with the camera, and even more frustratingly there are moments when the colour balance is almost too dark to keep track of what’s going on, but on the grand scheme of things these don’t inhibit the game’s overall presentation too greatly.

There’s cause for celebration from an aural perspective too, with a soundtrack that genuinely feels in close alignment to the rest of the design. The music moves alongside the action expertly, and keeps in with the overall dark and broody feel that the game gives out, whilst still covering a fairly broad spectrum of genres. Whilst the English voice acting is quite appropriately matched to each of the characters, this deepening of characterisation does mean some characters remain a touch irritating. That said, sticklers for original voice tracks will be pleased to find there’s dual-language audio too.

The game plays out as a third-person action game, and spends little time before briefing you on a range of ways to issue lethal force. As well as relying on swordplay, hefty punches allow for opening up guarding foes, whereas outside of close quarters your cybernetic arm can be used initially for gunplay, with further weapons to unlock later. A blood guage sits alongside your health meter, and manages all manner of special abilities – from your ability to shoot, all the way up to instantly lethal sword attacks that can help you out of tighter spots. Spoils from battle can help upgrade your capacity for both blood and health, and yet another of the game’s currencies allows you to buy new skills and upgrade older ones. When not attacking, yes, holding the block button is one option, but there’s a great deal more satisfaction to be had in the finesse of catching an attack with a precise block or dodge, and then proceeding to respond in kind with a huge counter attack. Between all of this and the speed and fluidity at which it moves, there’s plenty to make combat stunning to behold, and a joy to engage in. Whilst a lack of depth in combos means it’s not up there with the true cream of the hack-and-slash crop, it’s certainly Grasshopper’s best effort on this front yet, and there’s still plenty to be learned in how to masterfully deconstruct each wave of battle.

Whilst spread out across a number of missions, the pace of each can vary dramatically, with some being more heavy on the narrative side, and others being more about continuous streams of foes. Boss battles crop up fairly often too, and are usually pleasant enough deviations from the typical crowd-controlling nature of standard combat. Besides the game’s main stages there’s a range of optional sub-missions too. Whilst a number of these apply the same combat-based formula as the main missions onto a smaller section of play, there’s some other mini-games that come into consideration here too. Among these, and already stirring infamy within online circles is ‘Gigolo Mode’ – where Mondo attempts to seduce a variety of female characters via the rather curious method of leering at them until he’s feeling ‘courageous’ enough to ply them with gifts. In the knowledge of the developer’s attempts for Mondo to ape the antics of James Bond and his slew of ‘Bond girls’ this perhaps makes a little bit more sense, although still a little misjudged and generally ill-advised.

Where the game falls shortest is in its long-term appeal. Having completed the game once, there will no doubt be missed collectibles to be sought out, additional upgrades to be purchased, and new difficulties to be bested – but mileage here will vary, dependent on the type of gamer at the helm. Whilst side missions help somewhat to pad the meat of the game out, even completing each of these doesn’t turn Killer is Dead into a particularly long game, with a first playthrough unlikely to take more than around 10 hours. In equal amounts praise and criticism, there’s definitely room for more of what it offers.

Whilst the story-telling and characterisation could certainly have been better, the biggest criticism that can be levied at Killer is Dead is that there simply should be more of it. It looks good, it sounds good, and it even plays good: this is Grasshopper on some of their sharpest form to date. Whilst action fans are likely to find its shortcomings in volume made up elsewhere, it’s unlikely to convert those outside looking in.