The PlayStation 4 is here. Hurray! Sorry, got a bit excited there, but with the release of a new console comes a bunch of launch titles looking to satisfy a range of gamers. One of the launch titles, aimed at a more of a younger audience, is Knack. A first party platfomer and a new IP from Sony, sounds right up my street. Can Knack deliver? Read on to find out. 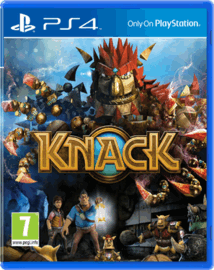 Yup, that’s right folks, Knack tells the story of Knack. Don’t worry, I’m not going to leave it at that. I just wanted to point that out, that’s all. The story focuses on an invention made over 20 years ago by a Doctor who has an interest in studying relics that can help the human race. This essentially leads to the creation of Knack. The aforementioned relics are also wanted by some nasty goblins, the main enemy in the game. As you can imagine, Knack is seen as the perfect weapon to bring an end to this “war” and destroy the goblins once and for all.

Without spoiling the story, the Doctor sets off with Knack on an adventure that would means the largest relic that anyone has ever come across. This relic could mean great things for the human race or complete destruction, depending on who gets their hands on it first. As you’d expect from a game this nature, the story is quite a simple one. It’s not the most enjoyable story and, to be honest, I did find myself getting a bored after a few hours.

With Knack being a PS4 launch title most people are going to look at the graphics and expect a big leap from what they’re used to with the PS3. While Knack doesn’t take that huge graphical leap like other launch titles, there is no denying that Knack is a nice visual attraction, especially for young kids. It’s all very clean, crisp, sharp and functional, nothing too jaw dropping. I did come across a few frame rate issues during a few of the busier battles, but nothing to get too worried about.

Understandably, most of the visual attention has been paid to Knack himself. He’s not a human so in some respects Knack is probably easier to highlight in terms of visual fidelity, but his detailed look is impressive still. The cut scenes show off him off in the best light, but there’s plenty to appreciate when you’re actually playing too. I would’ve liked to see a tad more variety in terms of the enemies as I felt like I’d seen all the goblins after just 30 minutes of play. So, yeah, it’s not the best looking launch title, but it’s not the worst either. As launch far as launch titles go, Knack is looks decent.

Knack’s sound design is nothing to shout off the rooftops about. The voice acting is good, but at times it does sounds rather strange. Knack’s voice just sounds wrong, not really going with everything else the game has to offer. I honestly just think Sony picked the wrong kind of voice for Knack. It’s a shame, because he’s the main character after all.

I’m of the thinking that any platform title has to hit the ground running. Bear with me, I’ll explain why. There are too many out there that quickly become boring and repetitive, never to be played again. While Knack does fall into that category exactly, it does have elements of it. All the fundamentals are there for a great platformer, but it never really goes beyond that level and really opens up. It almost feel like the development team were afraid to take a risk. It feels too ‘safe’, never going beyond walk, fight and watch cut scene.

You have one life bar that can be extended via the collection of relics.  As you collect relics, you’ll notice that Knack grows in height, leaving him looking and feeling like a complete beast against all on-coming enemies. If you somehow let him lose most of his body then you’ll find yourself dying with one hit. It’s quite frustrating because some of the checkpoints are poorly placed which means you’ll find yourself going through the same 10 minutes of gameplay time and time again. There are upgrades you can get to make Knack stronger, but much like his range of attacks, they’re limited. You do have a couple of special attacks that you can build up by getting your hands on Sunstone shards though. These are quite powerful and will do the trick against multiple enemies at once, but nothing to shout home about sadly.

Knack took me around 8 hours to complete. On the harder difficulties, I would add another hour or so to that figure due to the slightly harder enemies. Is there enough incentive to play through it again? Maybe but apart from the main story there aren’t many options within that will keep you going for a while. Although it doesn’t add anything to the longevity of the game, if you have a Vita you might may enjoy playing Knack via Remote Play. I tested it out and, to be honest, the game felt better suited to the handheld.

Knack has its fair share of flaws and shortcomings, but it’s still an enjoyable enough launch title for the PS4. Would it have got the same attention if it wasn’t a launch title or released a year ago? Absolutely not, but fair play to Sony for taking the risk and releasing a new IP with the launch of the PS4. It’s not going to set the gaming world alight, but if you go in with an open mind and a bit of repetitiveness or occasional frustration doesn’t bother you too much, you’ll probably get some fun out of Knack.