Focus Home Interactive have returned with another instalment of Tour De France, and they will be looking to improve from previous titles in which the game received mixed reviews. The Tour in its entirety extends well over 2,000km, and along the way are a series of remorseless roads and merciless mountains to negotiate. This game enticed cycling fans to take on this journey and give them a game to play religiously, but does this game deliver on a broader scale? As someone who is far from a cycling expert, I thought it would be good for me to explore whether this game will be a cult classic for cycling fans, or if it could branch out and appeal to a wider audience. 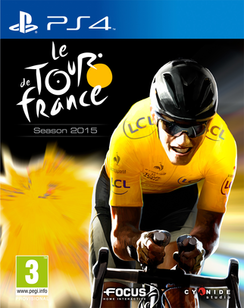 Now, before you delve straight in to this game, I would certainly recommend you work your way through the tutorial. Of course, if you have played previous titles and feel confident with the button configuration and tactical elements of cycling, then you would have no reason to. The tutorial is very interactive and extremely informative, and certainly helped me prepare for the races. You’ll learn all about conserving energy, changing gears, team communication and ways to replenish the fatigued cyclists.

The layout of the menu is very neat and simple. It could be argue they are too simple for an official game, and that perhaps some background animations would have fit in perfectly for this title. However, upon entering the Tour De France mode, you are greeted by a plethora of cycling teams from around the world. From Team Sky to Astana Pro Team, the choice is yours to choose a team and cyclist. Well, almost. It is worth noting that player names are unofficial, and while this could be considered a drawback, you do have the option to change the names of the cyclists. The choice is yours. Mark Cavendish could become a teammate of Mike Tyson, and Tyson could challenge for the yellow jacket. Let’s be honest, who wouldn’t want to see that?

Getting in to more serious matters of in-game detail, you can pick and choose which of the 23 official stages you would like to compete in, or you can take on the tournament in its entirety. Starting off in the Netherlands, the first stage is a time trial where the aim, depending on your team and cyclist, varies from finishing first or just finishing within an allotted time. Beyond that, the Tour begins to encapsulate you with it’s beauty. What I loved the most about this game were the superb visuals and the atmosphere. Cycling through glorious stretches of rural France, and riding through towns, neck and neck with other cyclists in which the streets are lined with a celebratory audience, the sense of occasion could not be missed and it was captured magnificently as it flowed through the game.

However, there is a downside. Depending on your point of view, some races were far too time consuming. For example, one stage of the Tour De France could take you well over an hour to complete. The initial enjoyment leads to a feeling of a laborious slog, holding the R2 button ceaselessly in your quest to finish as high as possible. I found the distance to be a further put off in situations where you are 5 or 10 kilometres from the finish line, your cyclist ‘hits the wall’ and you could drop over 100 places to near the back of the line. Even with my best attempts to conserve energy, sometimes there was little I could do to prevent my cyclist from being cut off from the leading pack.

Yet, Tour De France redeems itself when it comes to other game modes. One of these is Pro Team Mode, where you can play solo or co-op. You choose a country, name your team and compete in a series of races. I liked this game mode, especially the concept where you have one objective and your teammate has another, but I felt it could have been so much more if there was the capacity for online play. There is also a challenges game mode, in which your aim is to sprint downhill and finish within three allotted time sectors. The time sectors you finish in will determine whether you get a gold, silver or bronze medal. I thought the challenges were surprisingly exciting, even more so as you slalom down the countryside trying as hard as possible to beat your previous best score.

But, within the gameplay itself, I found it frustrating that the cyclists could not fall of their bikes and that turning corners felt too light and sharp. Sometimes, the slightest movement of the analogue stick was enough to turn your rider in to an invisible crowd barrier. The same frustration could be said for the cyclists’ inability to fall off their bikes. I felt the game lacked a bit of realism in that sense, but having said that, some gamers would have found it to be more of a gripe of their cyclist fell of his bike on every corner.

Getting back to other game modes, the multiplayer game mode offers a different format to the single player mode. In versus multiplayer, players are split in to two teams of cyclists, and each player can switch between cyclists in their team. This game mode was very tactical, as you had to weigh up which cyclist was best for each task. For example, I chose two or three riders to help the team during the uphill ascent, and the rest of the team for a sprint for the latter section of the race. I liked the concept of the team battle in multiplayer, but I feel the game mode would have excelled if it had online compatibility.

I really enjoyed my experience of playing Tour De France 2015, and I was surprised to the extent at which I found it enjoyable. Visually, the game is absolutely stunning and the general gameplay was a real high point. To balance that, I do believe that the omission of online play and difficulty in navigating the energy system made the game frustrating at times. I found myself turning the game off in frustration, but because of the charm of Tour De France, I found myself coming back to it more than I thought I would do.