With the PS3 considered outdated or retro to many, it’s rare to see games being released alone without a PS4 counterpart. However, here you have Legend of Heroes: Trails of Cold Steel, showing there’s still life in the old machine yet. Released in Japan during September 2013, two years later, the game gets a much deserved release in Europe. Much deserved… 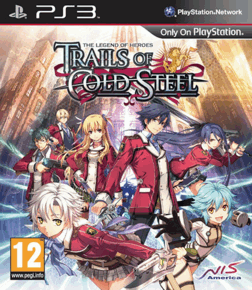 Legend of Heroes: Trails of Cold Steel begins in a giant fortress where a war taking place. A bunch of students show up assess the situation with every incentive to fight back with all their force. You then take control of a black-haired boy and then progress through the fortress fighting oncoming enemies alongside his classmates and instructor. After a few fights and cut scenes you are then transported five months earlier to where the black-haired boy can be seen again but this time he is on a train on his way to start student life.

I have to say the first half hour of the game was off putting. You have to fight your way through a series of battles but all of which are with high level characters all with a large portion of skills. It was not at all difficult but I did feel that someone new to the series would of been confused as how to battle especially as there is no tutorial. In fact I had to wait 6 hours in until I knew what some of the battle features and rewards actually did. The game does redeem itself soon after and anyone familiar with the series may see the beginning as either cool or insignificant.

Now I have done away with the small minor issue I will get onto the best parts; the game itself. As I mentioned this game redeems itself quite quickly. During the first hour you really see how beautiful the game is. The graphics are gorgeous; colourful and everything looks well presented with its cel-shaded art style common with many JRPGs.

Gameplay is a mix of social interaction with classmates; going on field studies to complete tasks and also fighting enemies during time away from school down in dungeons. If you love the Persona series this game will be equally enjoyable if not more. If story is something you enjoy; this is perfect as there is plenty of that. I did mention before it was only until 6 hours in that I found out almost all of the features in this game; that was because of the amount of opening dialogue in the beginning aswell as the opening battles and getting familiar with how things work.

The voice acting is superb and some of the awkward and funny situations in the game and personalities of the characters have kept me glued to the screen and many times I have found myself laughing or being in actual state of shock.

During the first part of the game I found one situation where all the classmates were telling each other their names and this happened so often that I found that they just kept repeating themselves but then after I just felt that it was like an intended awkward situation as I am sure I myself was in the same position during school. It is hard to explain but it depends on how you look at it. I myself saw this as its intended purpose.

Gameplay does not disappoint. There are a few key events whilst schooling. Firstly you will be get to take part in some triva where you will be asked a question with multiple answers. Get it right first time and your rank will increase. Outside of that and being part of the student council you will take on a series of tasks; some optional and others are part of progressing with the main story. When this happens the day usually ends so optional tasks are no longer available. You can also hang around with one of your classmates; you will have the option of spending time certain individuals however you’re only given so many affection points on your free days and like the optional tasks these disappear if you don’t use them so it is worth doing. The field studies that happen during the game are required to progress and mean you have a break from the town with your classmates; while away you will progress by doing certain optional quests elsewhere with the pre-assigned group. There are also some other optional things you can do such as Cooking and Fishing which are very fun and have their advantages. Various shops are in the game where you can purchase many types of items such as food and healing potions aswell as weapons; armour and accessories. You can exchange Mass which is gained from battles into the currency known as Mira. There is also a costume feature which changes the look of each character.

The battles do the game justice very well and in true Legend of Heroes fashion sticks to the formula and also adds some neat new features that work very nice. For character customisation you equip things called Orbments. Having a set of expendable slots you can equip Quartz which allow you to use the abilities from it. Enemies are seen in the field and you can initiate them by either running up to them or attack them from behind with your weapon; doing this will give you an advantage but this applies to them also so do not turn you back on them. Legend of Heroes veterans will adapt to the battles themselves quickly; you can move along the field while skills have a line of attack or area of effect that can hit all enemies but this also applies to them so placement on the battle field is always important.

Magical abilities are called Arts and Crafts. Crafts are unique character abilities that are learned by leveling while Arts are gained from Quartz which everyone can use. Battles consist of other tricks such counter dodging which for the most part I found useful but other times annoying and enemies can also Counter dodge meaning I have knocked out one of my team due to not paying attention. Most importantly is the Link System in battle; this is a Dual attack which can be linked across two characters and when initiated can cause a deadly attack by both characters without losing a turn. The Link System is important out of battle and this is because there is a Link Level which will increase depending on who you decide to spend time with the most. Finally the S-Break which is a super attack each character will learn at a certain point in the story which is a special attack which will do an insane amount of damage but will use up nearly not if all of a characters Craft Points.

This is a long game and is not something that can be completed over a short period; the music and sound is great and the English dub is superb. I also found some of the boss battles very tricky even on the easier difficulty but that adds to the game. You need to go into battle prepared and learn an enemies moves so you know the best approach to dealing with them.

I love Legend of Heroes: Trails of Cold Steel; I honestly do. If you want to get stuck into a great story then this is the perfect JRPG for you, but if battles are your thing you may want to enter with caution as the first few chapters focus on the narrative. Still, that negative aside, if you consider yourself a lover of JRPGs like me, then dust off your PS3 and pick up Legend of Heroes: Trails of Cold Steel.