Can Traveller’s Tales achieve the seemingly unachievable and continue to add to the ever expanding LEGO series without it feeling tired? Read on to find out. 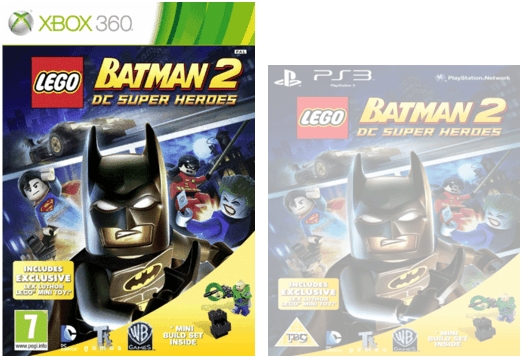 Depending on how you take your first play through, LEGO Batman 2: DC Super Heroes is deceptive. If like me, you play straight through the story missions without pausing for breath then you’d be forgiven for thinking that this was just the second in the LEGO Batman series. It is of course, but you know what I mean. As you dig deeper however this is by far the biggest LEGO game by a considerable distance. Not just in terms of size, but also in relation to how many new ideas are at work here.

There are 15 story missions of varying length and difficulty, which take you through the narrative and introduce the new characters. There’s nothing really standout about the story, The Joker gathers a group of well known criminals and wreaks havoc on the city as Batman and the Justice League set out to stop him, but lets face it you’re not playing LEGO games for that.

Superman spends a large portion of the campaign with you (much to Batmans dismay) and The Flash, Cyborg, Wonder Woman and the Green Lantern join you in the later stages. I don’t want to spoil too much in the way of powers but one huge new mechanic is the ability to fly courtesy of Superman, Green Lantern and Wonder Woman. At first glance it would seem slightly gamebreaking given that puzzles frequently involve you reaching certain areas, but just because you can fly somewhere, doesn’t necessarily mean you’ll have the tools you need once you’re there.

The suits from the first game make another appearance with slight tweaks here and there, for example the Power suit swaps out Bat Bombs for a homing rocket launcher of sorts for breaking shiny silver objects. The grapple mechanic has also been upgraded, you no longer need to be directly underneath grapple points to be able to latch onto them and once you are, you can switch to other points without having to drop down.

Perhaps the biggest change for the game (and the LEGO series in general) though is the introduction of properly voiced characters. Given that Traveller’s Tales have done such a good job in the past of conveying stories so brilliantly using nothing more than charming animations and grunts in cut scenes I did wonder if voice acting was needed. As usual I was wrong and it adds an awful lot to the game, allowing for story to be told in much more depth and creating better relationships between the characters. Trying to show Robins admiration for Batman or Batmans mild disdain for Superman without it would have certainly had a little less punch. I guess you needn’t worry when you draft in such heavy hitters from the voice acting world as Rob Paulsen, Troy Baker and Nolan “hey is that a videogame, can I do some voice acting for it?” North.

On screen prompts from Alfred do a good job of easing first timers into the series, providing useful information when acquiring new suits and also serve as a welcome reminder to those who played the first game a few years back. Combat plays a relatively small part in the grand scheme of things but is still animated beautifully, with each character having their own style and finishing move which can dispatch small groups of enemies with one swoop.

Co-op is just as fun as it ever has been and having two brains controlling things allows you to tackle the puzzles with a little more speed. The co-op camera still splits allowing players to break off and explore separately but in single player it does suffer at times, it only allows a slight amount of panning around and doesn’t always settle where you really want it when moving from one area to the next. It’s a small gripe and by no means gamebreaking or overly problematic.

I mentioned at the top that the size of the game was deceptive depending on how you play and that’s because of Gotham City. Most LEGO games have featured hubs of some sort for accessing levels, but never with as much detail as this. It’s a game all to itself and will take up considerably more of your time than the story. It’s full of landmarks from Gotham Zoo to The Town Hall and everything in between. It even features a fully functioning funfair with a ride able roller coaster and a full compliment of fairground attractions, some of which reward you with gold bricks for completion. There’s just so much to do, you can even break the animals out of the zoo to ride on and can earn an achievement for riding a gorilla to the top of Wayne Enterprises. It’s nuts, brilliantly, brilliantly nuts.

To give you some idea of the scale, upon initial completion of the story missions, my save file sat at about 15% and I had 7 characters unlocked. The rest are scattered across Gothams landmarks and need to be defeated and purchased before they can be used in Free Play. As well as a wealth of red and gold bricks that will no doubt take an age to find, the world is stacked with puzzles, citizens in peril to save, vehicles to unlock and variations on some of the mechanics found in the story. If you find a suit somewhere you can be sure there’s a use for it just around the corner.

It’s wonderful to see Traveller’s Tales continue to progress the LEGO games in a way that keeps each one feeling fresh and enjoyable. The open world treatment that Gotham City has been given is joyful and offers hours and hours of gameplay beyond the campaign. LEGO Batman 2: DC Super Heroes is every bit as beautiful and charming as any of the games that have come before it, but bigger and most certainly better.