The toys-to-life genre gets a massive infusion this year in the form of LEGO Dimensions. With the obvious fit of the hugely popular games from TT Games and the undisputed king of the toy store providing the hardware components, Dimensions fuses a number of elements to create one of the most appealing toy-based games yet. Does it live up to the hype, and more importantly, the price tag? 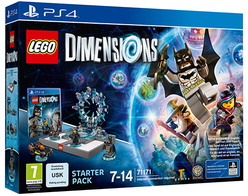 For the purposes of this review, the game was played through using the three main characters provided in the Starter Pack. Additional content has been purchased and played but will not factor into this review, but there will be a short piece in separate post.

LEGO Dimensions, then. A game so blindingly obvious in its premise that I’m frankly amazed it’s taken this long to come to market. The strangely enthralling gameplay of the Traveller’s Tales games, with the lure of actual, real life LEGO is quite possibly the best combination that could have been smashed together since one enterprising individual decided to drizzle Baked Beans over his slightly overly burnt bread. Fortunately, LEGO Dimensions not only satisfies the child in everyone by giving you a number of multi-coloured Danish blocks to play with, but also throws out possibly the finest LEGO game in years.

The basic premise to the story is that Lord Vortech (voiced by Gary Oldman in a scenery-chewing performance) is wreaking havoc across the titular LEGO Dimensions (essentially the different licenses that feature in the game), and aiming to steal the “Foundation Elements” of each one. For example, Kryptonite from the DC Universe Dimension, The One Ring from the Lord of the Rings Dimension, and so on. To restore order to the LEGO universe, your three trusty warriors must journey through these Dimensions and retrieve as many of the Foundation elements as possible and ultimately stop Lord Vortech from collecting them all and causing chaos in the LEGO universe. Sounds complex? Well, it is, for a LEGO game, but don’t worry about it. Things make sense as you start to work your way through the game. Just. Oh, did I mention that your “three trusty warriors” were Batman, Gandalf and Wyldstyle from the LEGO Movie? Well, yeah, there’s that.

Let’s address the huge, injection-moulded elephant in the room though. LEGO Dimensions is not a cheap game. The Starter Pack, at its cheapest, is £80. That gets you the game, the toy pad, the all-important minifig bases, and 269 bricks to build up the Dimensions Portal, Batman, Wyldstyle and Gandalf, as well as a Batmobile. If you want, you can build it up using the instruction manual in the box, but there’s a reason to wait and build it when the game asks you to. It’s a relatively simple build, but it’s not skimped upon in any way, full of detail and intricacies. It’s expensive, but for a standalone set of that size you’re probably looking at around £25/£30 anyway. My issue with the pricing comes in when it comes to the individual figures and team packs, but we’ll come onto those later. Once you’ve bitten the bullet and picked up the Starter Pack, convinced yourself you’re in for the long haul and contacted your bank to put a stop on any transactions carried out at your local Toys R Us, you can get on with playing the actual game. From the off, you get the feeling that it’s your typical LEGO game with a huge twist. Building your characters in the real world, then dropping them onto the toy pad to see them appear in the game is bizarrely satisfying, much more so than the likes of Disney Infinity and Skylanders, presumably down to the investment you have in the figures from building them in the first place, however quickly you can put them together.

In terms of the core gameplay, it’s essentially more of the same tried and tested LEGO formula, but with a couple of neat twists. After you’ve done your building, drop your minifigs on the toy pad, jump through the portal in the game, and before you know it you’re running round picking up studs quicker than an attractive lady with loose morals on a night out. The familiar format of “Hit things until they break, build new things, find secret areas and collect as much as you can” is TT Games’ staple, but the toy pad injects a few novel gameplay mechanics into the format. Far from being “the thing you put the toys on to make them appear on the telly”, there will be moments where the pad’s sections glow different colours. To progress in the game, you simply move the relevant character to the relevant section. There are several types of these interactions throughout the game, and for the most part they’re pretty good fun. Towards the end of the story you start to feel like these mechanics are being stretched slightly thin, and this is down to the restriction Dimensions has placed on itself for unlocking new characters.

Typically in LEGO games, you unlock characters as you progress, with different abilities allowing you to get through different areas and unlock new skills throughout the game. Due to the very nature of the toys-to-life genre, however, this method of unlocking characters is null and void, and it’s a frustrating but understandable hindrance. Despite this being a LEGO game, quite possibly the two biggest franchises are notably absent from Dimensions. Star Wars and the Marvel Universe, presumably due to Disney’s vested interest in Infinity. It’s a shame, and I hope it’s something that can be worked out in terms of licensing, as the combination of the LEGO Marvel/Star Wars games with actual toys would skyrocket this game in terms of sales. My other big complaint would be the pricing of the expansion content. Don’t get me wrong, I’m a big LEGO fan, but £15 for a single minifig and a small buildable object is a bit steep, however cool they may be. (The thought did cross my mind that the money from this game must be going to a ton of different places, which explains the cost to some extent!)

The production values involved with Dimensions are simply astonishing, with a bunch of crossovers that you wouldn’t dream of seeing in real life. Batman storming a bunch of Orcs in Middle-Earth. The Joker taking over Mr Burns’ office in Springfield. GLaDOS’s return in the most glorious licensing collaboration I think I’ve ever seen. Every level has something wonderful tucked away inside of it, with much more than a sly grin being raised on many an occasion. There are dozens of surprises littered across the 15 or so hours in the first play through, with potentially hundreds more being hidden across the multitude of hub worlds and side areas within the story. Every franchise that’s advertised on the box is represented by a level in the game, so you get a full experience without really having to shell out anything more on the expansions. The voice cast is jaw-dropping. With the aforementioned Oldman hamming it up, the likes of Troy Baker represent the Videogame landscape, with genuine Hollywood megastars such as Chris Pratt and Michael J Fox(!) lending their talents to the relevant characters. Honestly, there is so much talent in this game that it’s deserving of its own article

LEGO Dimensions is by far and away the best toys-to-life game I’ve played. Not only that, it’s my favourite LEGO game too. A lot of what you’ll get out of it depends on whether you enjoy the Lego games of old, and also whether you embrace your inner child and enjoy playing with actual LEGO. Fortunately for me, I really enjoy both. The fact that Dimensions opens up the Toy Pad beyond being “just a thing” is a really great addition, and ultimately this is the pinnacle of the Toys to Life genre right now. What other game will see you playing as Gandalf, driving the Batmobile, hurtling after a Dalek whilst Marty McFly and Doc Brown are in hot pursuit? Exactly. The only reason this isn’t scoring higher is simply down to the pricing. And the fact it’s probably going to bankrupt me. Don’t these folks know that I’m trying to save for a house?!