Warner Bros. and Travellers Tales latest LEGO title takes Jurassic fans to Islas Nublar and Sorna. Is it a soaring success, or is the long running toy-based franchise starting to feel like a bit of a fossil? 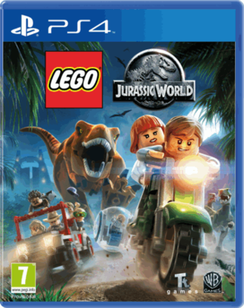 I could be horribly cynical in this game review and simply write “It’s a LEGO game” and give a score. I won’t but, let’s be honest, the LEGO video game series is nothing if not somewhat cookie cutter in its execution. Where the games have their strengths, however, is that each batch is (for the most part) full of delicious biscuity goodness shot through with bits of chocolate chip… or not, because they’re video games OH YOU KNOW WHAT I MEAN!

So, for those of you trapped on a Costa Rican island full of dinosaurs for the past 22 years, the LEGO games are fun romps in which one or two players guide a group of blocky heroes through a linear level, smashing lego objects, solving light puzzles and finding hidden gubbins. In recent games, these block breaking sojourns have been connected by expansive open worlds which contain even more puzzles. Complete a level and it unlocks for free play where you can take any extra characters you may have found back in to solve more puzzles and unlock everything on offer.

In a way, the LEGO games are perhaps the last bastion of the classic PS2/XBox/GameCube era, uncomplicated by modern tropes like online requirements and (to some extent, because the last LEGO Batman did dabble in this) DLC and presenting a straightforward action adventure romp. This is by no means a bad thing and, certainly for younger audiences, it can be quite a relaxing gaming experience.

The LEGO games tend to be tied into other licensed property, such as Batman, Star Wars, Pirates of the Caribbean or Marvel Superheroes and often follow the stories of their licenses closely while adding a slew of silly and sometimes subversive humour. While the earlier games played out without dialogue, using visual gags to tell the story, recent games have lifted audio from the films on which they are based, with the exception of the Marvel and DC games which use original scripts and voice acting. This is a bit of a double edged sword – it means that the player instantly relates to the soundbites they are hearing, however it also means that the stories can be seriously abridged due to the need to cut around on screen dialogue (and make things family friendly!) which can lead to a disjointed experience. Lego Jurassic World is particularly guilty of this.

While it is named for the recently released fourth installment of the Jurassic Park franchise, the game is split into four parts, taking story elements from each of the films. The Jurassic World segment comes off the best of all three segments with actors from the film providing additional dialogue to make things flow a bit better, however Jurassic Park, The Lost World and Jurassic Park 3 all feel like whistlestop tours of their respective films stories. Add in the fact that some characters are redubbed by different actors, this provides a strange and disjointed mix. Still, the game is buoyed by its usual wit, including an amusing Jaws gag in the Lost World section.

As the story is split into four areas across two islands (with detours to New Mexico and San Diego in Jurassic Park and The Lost World respectively) the game has four separate hub worlds which means that the area between levels feel considerably smaller than, say the epic GTA lite Lego Marvel. While Jurassic World has the most to do, the other three areas feel a bit sparse, with far less challenges and unlocks than previous games; this leads to the experience feeling a bit brisk and stingy. But its brevity is in its favour, certainly for younger players. While previous games could feel overwhelming for some, there is a sense of accessibility in Jurassic World, Travellers Tale’s most stripped back Lego game since perhaps Lego Indiana Jones way back in 2008.

One great thing that does make Jurassic World stand out from its siblings, however, is the inclusion of a new character type – dinosaurs. Yes, you can stomp around Isla Nublar as a Lego T-Rex and it feels GOOD! The dino’s have a great deal of weight to them and are generally used to solve puzzles relating to smashing down large objects. It’s a minor thing but it does define this particular entry.

It doesn’t rewrite the LEGO game book and it feels a little too brief in comparison to previous entries, but LEGO Jurassic World has it where it counts and the inclusion of playable dinosaurs doesn’t hurt either. As Travellers Tales works up to releasing their ambitious Skylanders/Infinity-a-like, LEGO Dimensions, it is entirely possible that we’ll see these individual franchise entries become all but extinct which would be a shame. While I would recommend LEGO Marvel as the definitive LEGO experience, if you’re in need of your annual LEGO game fix or are a fan of the Jurassic universe, you should give this a whirl.