It’s fair to say that pretty much all the LEGO titles that have been released so far have enjoyed quite a bit of success. Personally, they’ve always passed me by, but I know they’re enjoyed by many due to fun and quirky charm. Enter LEGO Marvel Super Heroes on the PS4, my first opportunity to get hands-on with a title from the series. Is it yet another success for the LEGO series, or was I right to stay away? Read on to find out. 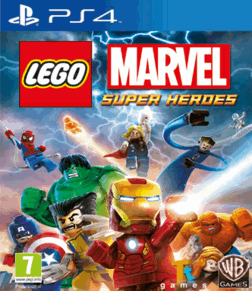 Quirky and full of humour, LEGO Marvel Super Heroes throws plenty of characters into the mix. Oh and when I say plenty, I actually mean a lot! The likes of the Hulk, Captain America and Iron Man come together to stop Doctor Doom as he attempts to build some kind of major weapon with the collection of Cosmic Bricks. As I touched upon briefly, the story is jam packed with hilarious moments, resulting in me enjoying events much more than I originally thought I would. The references to the Avengers and other Marvel related nods alone made the story worthwhile. I mean, come on, where else would you find Spider-Man joining up with Iron Man and Wolverine in an adventure? That said, if you’re not into the Marvel universe then you probably won’t get much of what happens, but even then I would still recommend a playthrough. The charming story certainly peaked my interest in future LEGO titles, because let’s face it you can’t really beat some light-hearted fun with plastic Marvel characters.

Yes, this a review of LEGO Marvel Super Heroes on the PS4, but you’d be naive to come into it expecting graphical detail on par with Killzone Shadow Fall or Assassin’s Creed IV. That said, being a LEGO title does play into Marvel Super Heroes favour a little. It might not be pushing thousands or millions of polygons, but it has a carries a visual charm most other titles can only dream of having. That LEGO look really has been nailed by TT Games on the PS4, with pretty much everything looking like actual LEGO!

Impressively, there are over 100 Marvel characters in the game, with each one looking just as good as the next. Personally, Iron Man and Wolverine are my favourite as they made me chuckle every time I laid my eyes on them. The environments are well designed too, with many iconic locations from the Marvel universe being brought to life. Asgard in LEGO form, just amazing. X-Mansion and Oscorp Industries don’t look too shabby either.

Perhaps the best thing about LEGO Marvel Super Heroes, the audio is pretty damn good. It’s a bummer that the likes of Robert Downey Jr. aren’t voicing the character, but you honestly don’t even notice. The “replacement” voice actors do a terrific job, with their style complimenting the tone of the game superbly. Even the music is decent, matching the on-screen shenanigans very well.

If you’ve ever wondered what it would be like to play a toned down GTA-esque game, controlling Thor or The Hulk, then LEGO Marvel Super Heroes is the answer. It’s a slight shame then that the gameplay is a bit basic. Fun, but basic. This might sound a tad harsher than I mean it to, but pretty much all the levels in the game task you with pulling a few switches, beating up a some enemies and solve a puzzle or two. It’s still fun enough, but I would’ve liked to see a bit more variation. The environments are changed up quite often though, helping to keep the action fresh as you play through the game.

You also get to switch between the many characters on offer, usually to perform a unique action or task. For example, you’ll need to use the Hulk’s extreme power to pick up big objects or switch over to Iron Man if you want to fly over to a certain point. Most of the time you’ll be using each character’s powers to solve puzzles, with difficulty depending on which heroes you’re given control over. I’ll be totally honest, I did find a few of the puzzles to be a quite hard and frustrating. This might be because I’m new to the LEGO games and perhaps I was over thinking  a bit, but I was left frustrated at times. It didn’t last very long, but worth mentioning nonetheless. So if you’re like me and are relatively new to the LEGO games, just beware!

The above frustration is ease somewhat when playing in co-op, because after all two heads are better than one. It’s a great little feature, one that I really enjoyed. I asked a family member to control The Hulk with the DualShock 4 while I controlled Iron Man with the Vita. It was a completely seamless and enjoyable experience, leading to missions and puzzles within them being completed that little bit faster.

There is plenty of content in LEGO Marvel Super Heroes to keep you entertained for many hours. Whether you want to glide, drive or smash your way through the city, you can do so openly in the Free mode. It also gives you completionists out there a chance to collect everything the game has to offer. With over 100 Marvel Characters to unlock, it’s safe to say that it will take you quite a while to get them all.

Despite the odd frustrating section and lack of true variation in the gameplay, LEGO Marvel Super Heroes is a fun game that will keep both fans and newcomers to the series suitably entertained. It’s quirky charm and great sense of humour is undeniable. Thor, Spider-Man, Hulk, Iron Man and Captain America recreated in LEGO with hilarious results, you can’t really go wrong.