As a lover of visual novels, I do love a good narrative, whisking me away to feudal Japan and playing out a life often in a fantastical fairy tale. The Lions Song, however, is unlike anything I have played before and has captured my heart on so many levels. It may be something many might pass by, but stay put here and you will see why this is an unmissable adventure!

The Lions Song is a point and click narrative adventure, featuring a series of four self-contained episodic stories set in an early 20th century Austria before the cataclysm of World War 1. Based in the capital city Vienna, many inspirations have been taken from their homeland, an incubator of creative and intellectual minds all connected in the heart of culture and modernism, all represented by three different, yet connected protagonists.

With one protagonist being a composer, the sound design plays an important role of not only defining this character but places itself at the core, the backbone of the whole tale which develops over the course of your adventure based on your decisions. The main and reccurring theme played throughout this adventure, as it turns out, is the composition of our first character, Wilma Dörfl. As you start your experience, you are met with a slow orchestral track, filled with despair, a strange melancholy set against a dark and stormy backdrop. Despite this initial feeling, a sense of tranquillity soon filled my heart, which then seemed to develop into a glimmer of hope. The soundtrack is indeed a complex swirl of emotions, all layered up, each representing a different emotional aspect which is as complicated as the human psyche.

Whilst the number of compositions is limited and characters are mute, a greater emphasis is placed on ambience, focusing on the smaller details which hold a greater influence, a theme which is consistent throughout. The tranquil pitter-patter of rain hitting the ground, the hushed mumblings of surrounding conversations, heart palpitations in a moment of angst, even the sudden roar of a shocked crowd caused an unexpected leap of shock in myself. It is the smaller details such as these that have created a truly immersive experience.

It is not only in the sound, but the art design too that is simplistic yet entirely complex and detailed. The sepia, monochrome aesthetic instantly captures the periodic setting and the pixelart quickly captured my attention. I have been blown away by how even the most subtle of details bring the whole thing to life! The characters and their story is what the game is all about, and the animations have been lovingly crafted, really capturing their personalities and moods. Their various emotional states have been represented so well that they are incredibly lifelike. Faces drop in exhaustion, eyes and mouths open wide in shock, the intensity of their breath varies as their chests move up and down at varied paces. All of these things make it so easy to build a connection with each of these individuals.

It is not just the characters, the locations and surroundings are also filled with life and changing states. Hordes of bustling people in the street, deteriorating weather as a storm closes in, illuminated windows as lightning strikes whilst a lanterns flame flickers and sways in the background. All of these elements combined to create a harmonious and immersive experience that I have not yet experienced in a game of this genre. Although vocals are not present, I was impressed how emotions are also portrayed by the text on the screen, from text that vibrates to all caps, even these smallest details have a large impact just as great as any sound.

Previously an episodic release on Steam back in 2017, all four episodes have been combined into this definitive release on the Nintendo Switch, which is perfect for picking up on the go in-between work and travel. All four episodes are available from the start, and whilst you can jump into any episode you like, the most immersive experience presents itself by following them in order. As a narrative adventure, I must control myself in what I share here as I want to avoid any spoiler territory, and this really is an adventure you need to experience yourself with as little influence as possible!

The overall theme is about connections and decisions and is something that is built upon layers and layers of emotions in the human psyche. It depicts chances, fate, connections and influences that are made, lives intertwining without you even realising, no matter how big or small they may seem. Topics that are very much in the spotlight today are touched upon and represented throughout each story. From mental health to gender equality, there is a constant battle against self-discovery, personal demons and social norms that has remained constant throughout time. You make take from it what you will, but I’m sure most of us can relate to these characters and situations in one way or another. I know I certainly have!

Episode 1: Silence, follows Wilma Dörfl, a young and famous musician and composer who is facing writer’s block and struggling to find inspiration. Her mentor, Arthur, has supported her in her work and has set up a grand opportunity which could make or break her career. His timing, however, is poor, and the approaching storm is foreboding of a difficult time. At his suggestion, Wilma heads to his cabin in the mountains to escape the hustle and bustle of city life to help her find inspiration and complete her composition. Through narrative selection and exploration, will you help Wilma through her anxiety and fears, the crippling pressure and loneliness to become successful?

Episode 2: Anthology follows Franz Markert, a young and up & coming painter seeking recognition for his work. Whilst gifted with the unique ability to see his subjects most deep and hidden layers of their personality, he often loses control and blacks out in his own mental struggle to discover his true self. Can you help him find inspiration, overcome his self-doubt and take his canvases to the next level?

Episode 3: Derivation follows Emma Recniczek, a great mathematical mind attempting to solve a problem around “change”. In a period that places women second in domestication, Emma must find a way to fight a gentlemen’s club of mathematicians to discuss and prove her theory and escape the social shackles that are placed on her abilities as a woman.

Episode 4: Closure follows a new group of characters for the finale. On this final journey, all previous storylines are connected and intertwine, and these strangers will form a bond strung together by all these connections. This forms an epilogue of your previous choices, where you will see the outcome of all your decisions.

Each of these stories has been exceptionally written, and the narrative sucks you in. Each episode will last you anywhere from thirty minutes to an hour, with about 4 hours for completion, making it perfect to take with you and delve back in to on the go. As you read through their stories, you will be prompted and encouraged to explore your surroundings or even the whole city with a point and click, all using the left stick and A button. Unfortunately, the touchscreen is unsupported, however, the style of gameplay here renders this pointless anyway. 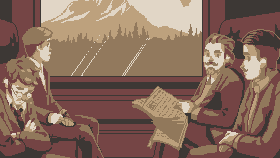 Each decision you make has the power to influence their future. These influences, however, do not limit themselves to the individual. There is a saying in Vienna which roughly translates as “Vienna is a small village”, meaning that everybody somehow seems to know one another. Every choice you make has the ability to influence the other stories in small ways. It has been incredibly planned out and it was fascinating and exciting to see how their fates and connections intertwined. It was also nerve-racking to wait and see if my choices had lead to success. At the end of each episode, there is a new feature to decide again. This nifty feature also shows you the percentages of how many other players also made the same decision, however, this does not suggest if they were indeed the “right” decision. Here, you have the ability to go back and redo specific sections to test out cause and effect, to see how a different selection will play out. Of course, you may just go back and replay each one again, where multiple playthroughs will open up new paths and outcomes, in turn filling up the connections gallery, a place where you can see your characters “achievements” and how new connections can reveal new things.

The Lions Song is a brief and niche adventure and may not appeal to everyone. If you are a lover of deep narratives, history and the arts then this will definitely capture your heart as it has mine. At first glance, I was a little sceptical if I would find this enjoyable, but by the end, I will admit I love it. The characters and setting are so full of life and it is certainly one of the most real and relatable experiences I have had in a long time. Each episode envelops you in emotion. The anxiety, the doubt, the struggle, the relief, even humour; it was so easy to become absorbed and there were many times I was taken by surprise with the unexpected. It challenges your mind and perceptions, encourages you to explore and look at things in a new way. It shows that we are all connected and how important and real those connections are. The decisions we make can influence others even if we do not know it. Life may have downs but it also has ups. Even we are now connected through these words. How profound.

The characters and setting are so full of life and it is certainly one of the most real and relatable experiences I have had in a long time.