A cheerleader, a chainsaw, the decapitated but still-talking head of a lover, and a zombie infestation. Credit where it’s due: it’s not the most likely premise. A likely idea is typically the last we’d expect from Grasshopper Manufacture though, and with this, Lollipop Chainsaw joins the growing line of weird and wonderful creations from visionary producer/director Goichi Suda. But premise aside, just how does it fair? 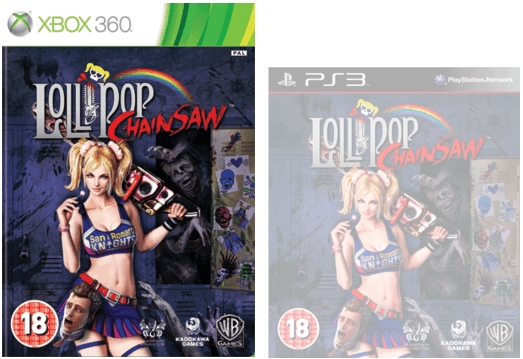 Check all notions of normality at the door, and buckle up. Residing in San Romero (no prizes for spotting the reference), the Starling family are quite unlike most others given their tendency to hunt zombies, with Juliet – the middle of three daughters – being the slayer in particular whose role you take on. Resting a little heavy on the fanservice side of things, Juliet’s daytime role as a school cheerleader defines her standard choice in getup, and also goes some way to covering off her and typically cheerful disposition towards life. Nick is the apple of Juliet’s eye, and in trying to protect her admist a zombie outbreak at their school, ends up falling foul of an infectuous bite, leaving Juliet no choice but to do all she can to save him – taking her faithful chainsaw to saw his head clean off, and casting a spell to contain him within the head alone. Now attached to her skirt like a kooky accessory, it’s time to find the cause of the zombie outbreak, and to put a stop to it.

Throughout the course of the game you’re introduced fleetingly to a series of enemy bosses as well as each of Juliet’s nearest and dearest, but the main stars of the show are undoubtably Nick & Juliet themselves, with their relationship being the integral part of the story. With the script being penned by Hollywood writer James Gunn, it’s perhaps not that surprising that the game’s dialogue is generally fairly decent – whilst the humour is steeped heavily in pop-culture references and as such is fairly subjective, it’s likely to have many chuckling along for a lot of the way. Juliet herself reveals very quickly that she’s considerably more sassy and foul-mouthed than you might initially expect, and whilst for the most part Nick is very much the supportive partner, there’s any number of moments that bear out an understandably downtrodden side to him that is glossed over, mocked, and generally ignored by Juliet. It’s all fairly light-hearted, but there is an element of established gender role-reversal in some of its commentary, which makes for a pretty interesting contrast to how many other games portray their leading roles.

Impact is one thing Lollipop Chainsaw definitely doesn’t hold back on. Menus are done up in a delightfully kitschy pop-art style, chainsaw swings are oft accompanied by as many rainbows as they are gushes of blood, and Juliet herself is head to toe, the very picture of a bubbly high-school cheerleader. Despite there being a relatively short number of stages to battle through, there’s still a huge range of environment styles within them, spanning the bright and bold just as equally as the dark and dingy. It’s a fabulous and creative world, and whilst there’s perhaps a little more titilation of Juliet than some might find appropriate, there’s enough going on elsewhere in the visuals to reduce the focus on this, not to mention enough layers of sassy characterisation on top to prevent her grating too badly as a character.

Most enemies are straightforward enough zombies cut & pasted ad infinitum, with slight tweaks telling their differing attack patterns being the only real distinction between one another. Bosses on the other hand tap back into the creative side of the game, with each being meticulously matched to a specific musical movement – punk, psychadelica, funk, and so on – and really do a great job of both aping stereotypes and amusing. From a technical point of view, the game’s competent more than dazzling, and whilst there’s a nice solid frame rate to celebrate, there’s some minor gripes about the camera which aren’t helped by the boxed-in nature of many of the game’s fight scenes.

The game’s desire to create a strong impression is just as strong in the audio department, too. On top of tracks composed specifically for the game, there’s an impressive amount of licensed music being used, from cheesy but sublimely-placed pop, all the way up to melodic death metal, and with plenty in between. Whilst a lot of this is contextual, there’s also the option to set up your own playlists if you’ve any particular favourites when things drop back to a more regular pace, which is a nice option given the rather divisive nature of some tracks.

From a vocal standpoint, some of the lesser characters do suffer a bit due to there being very little characterisation to actually work with. For the stars of the show though it’s a completely different story, with exemplary performances from both Tara Strong as Juliet, and Michael Rosenbaum as Nick. Perhaps the only fault to really levy at this point is a technical one, where prolonged fighting in certain areas will see the same, supposedly candid lines repeated over and over. It’s not a huge oversight, but given the level of quality aside from this it’s a real shame.

The majority of gameplay segments take the shape of you running around a series of cordened-off arenas, beating up waves of zombies with a range of attacks. Pom-poms are used for light attacks, with your chainsaw allowing more powerful strikes but proving considerably more unwieldy in the process. As to be expected there are combos that built on a combination of light hits, low hits, heavy hits, and even dodges, and learning how best to string them together is the name of the game, with more combos being available to purchase via an in-game shop as you go along. It never gets particularly fast or furious though, and there’s a slightly disappointing feeling of disconnection and floatiness through most of the combat. Thankfully the game seems to grasp this shortcoming, and higher performance is less about huge, fluid combos and stylish dispatching, but rather about trying to manage large crowds of enemies, and whittling them all down to then claim “Sparkle Hunting” – a bonus awarded when one convenient blow takes out a large number of foes all at once.

A few other combat mechanisms open up as you progress, such as the “Chainsaw Dash” and “Chainsaw Blaster” – the former pushing you into a continued run that requires you to stick to a course of power-ups to sustain it, and the latter being a rather pooryly executed attempt at introducing shooting mechanics, that is spoiled by a lock-on system that’s determined to ruin all of your hard work through auto-correction. Aside from the combat basics and some attempts to spice these up (see zombie basketball and zombie baseball), there’s quite a few other neatly themed elements thrown in on top with quite some regularity – vaulting on a pummel horse to reach higher locations, cheering on Nick as you plant him on a Zombie’s body and get him to open up new paths, and so on. Whilst these mostly boil down to a series of QTE variants, they’re light-hearted enough to avoid jarring what is already quite an easy-going experience, and some are creative enough to provide some real highlights. There are some segments that require quicker thinking – clarified by forced time limits and school friends to be saved – but even still there’s never any desperate urgency or challenge that will throw a more seasoned gamer into any degree of panic.

By measuring the game’s length, the picture becomes quite clear that Lollipop Chainsaw is most definitely a case of style over substance – with only 6 full levels to speak of, there’s little doubt that nearly all of the game could be seen in two or three sessions. Between a combo list to pad out, stats to max, artwork to unlock – and many details to busy yourself with – there’s plenty to slowly chip away at unlocking if you are so inclined. Whilst the game as a whole does prompt you to re-visit levels on higher difficulty levels, or to launch yourself at the global high score boards, the game’s core mechanics just aren’t solid enough to make this an especially convincing proposition – and neither does the way in which the original charm and wonder degrade with each subsequent run.

It’s bright, original, humourous, and fun. Whilst these alone make it very easy to recommend Lollipop Chainsaw, there’s no denying that you could be playing any number of games that better handle any of its core gameplay components. For those looking for something fresh and creative though, any number of infavourable comparisons are drowned out in the delightful lunacy of its game world and ideas.