Lost Dimension certainly doesn’t make a great first impression. On the surface, the visuals aren’t up to scratch, the plot is fairly hackneyed and the turn-based RPG battles aren’t exactly revolutionary. However, there is one particularly unique gameplay mechanic that somehow manages to keep pushing you forward, eager to progress. Find out how I got on with Lost Dimension in my full review below. 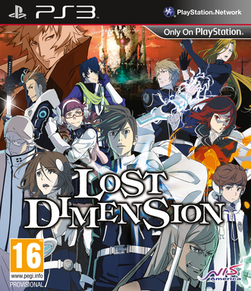 The story consists of the world being threatened by a terrorist known as The End. He has launched a campaign of destruction against major capital cities, with the threat of further global annihilation in three days time. Only the secret service unit known as S.H.I.E.L.D stand any hope of breaching The Pillar (his base of operations), and preventing the impending disaster. You take on the role of eighteen year-old Sho Kasugai, who – along with ten other psychically gifted teammates, finds himself inside The Pillar, seemingly the earth’s last hope of defeating The End.

The bulk of the gameplay consists of working your way through several floors of main missions and side-quests, made up of action-oriented, turn-based battles. You take direct control over six agents in each fight, and can move them freely around the battle area. However, tactics are very important, whereby keeping your allies close together will allow them to perform assist attacks and counters, as well as building up closer trust between one another. Positioning your teammates and combining your allies skills is the key to successful attacks, as well as a strong defence.

Each team member can also make use of their psychic gift, a different special ability where use is limited in battle through sanity points, which if over-used can cause the character to go enter a beserk state and lose control over whether they attack friends or foes. Sparing use of the skills can both enhance your existing attacks, and support characters when they are in need. Planning a strategy of attack is therefore paramount, but the gameplay is balanced enough in order to avoid becoming too deeply strategic to the point where each battle takes hours before you can even get going. These fights are fun enough to begin with, but a lack of variety in terms of enemy types, and the slower pace do result in a slightly monotonous feel to the battles.

There is a visual novel element to Lost Dimension. Through social interaction between fights, you can choose different conversation paths and try to bond with some allies more than others. This not only lets you get to know more about each character, but also provides greater camaraderie, which converts to greater assist bonuses during battles. The social interactions are sadly a bit stilted and slow-paced, resulting in them quickly approaching tiring and tedious. However, those who persevere with the social interactions more longer term will see it pay off in battle, letting you reap the benefits as you progress.

Between battles and building social relationships, you can manufacture new equipment for your team and setup your load-outs for the next battle, as well as levelling up your skills and abilities. This allows you to customise each character to an extent, focusing their skill points on offensive or support features. It also allows you to teach your team new skills left behind by a lost comrade. The options are fairly limited however, and rarely feel like they have much impact in battle, especially when very few of the battles in the game offer a real challenge, which is a shame. In fact, the title as a whole feels a tad on the short and easy side for a JRPG, weighing in at a disappointing twenty hours or so on your first attempt.

What makes things really intriguing, however, is that The End has placed a series of traitors in your midst. Whilst you are all stuck in the mysterious Pillar, there is always someone plotting to derail your rescue effort, with the identity of the traitors changing on every playthrough. Before clearing each floor and moving on to the next, the team must determine who the traitor is and vote them off the team. By using a combination of Sho Kasugai’s Vision ability, which allows for visual hints about the future of a character, and through hearing strange voices between missions, the player has to piece together the clues, eventually leading to the traitor themselves.

On each floor there will be three possible suspects, and all remaining teammates vote who they want to eliminate, whether wrong or right. There will be situations when an ally will vote off the wrong person, simply because their camaraderie is too low. Being the team leader, you have to make sure you give every character the chance to fight alongside one another, in order to build trust. This adds a real element of risk and danger to proceedings where as an incorrect judgement could cause untold problems down the line. Even worse, the random nature of the traitor means that even someone you thought was a close friend can turn on you, just like that.

Despite this really engaging element, Lost Dimension certainly isn’t a technically proficient title. Graphically the character sprites are pretty simple, backgrounds are unimaginative and bland. The overall animation package on offer is also very basic. The Anime focused character design is interesting, although never really rising above your basic expectations for the genre. Sadly, loading times between almost every screen are pretty hefty, which definitely breaks the flow and urgency of proceedings. The music can stray into being catchy at times, but too often the same themes are overused and become irritating.

The core deceit of Lost Dimension really captures the imagination and carries a real weight of consequence to your actions. The decisions that you and your team make in the room of judgement have a massive impact not only on future missions but on the type of outcome you can attain at the end of the game. The fact that everything is random means that no matter how much trust and time you invest into someone, they can still turn on you, providing an even greater emotional impact. The dull combat and shallow social interactions make things a slog at times, but the chance to investigate your teammates and decide who is poised to stab you in the back strangely keeps you going despite its flaws. Lost Dimension remains far from the classic status than its premise perhaps deserves, but the developers have tried, admirably I might add, to make it a unique title in the ever-growing genre.

Despite the many gameplay flaws, i did keep wanting to come back to the title just to go through another Traitor vote in the Judgement room!