Lost Planet has had a slightly staggered past, sloshing backwards and forwards through snow to tropical heat and back again. Now Lost Planet 3 returns to the more conventional story-driven style of the original in the form of a prequel. We take a look to see if there’s still life in this seemingly imperturbable franchise, safely armed with the notion that there’s nothing that a big-ass Mech can’t make awesome, surely? 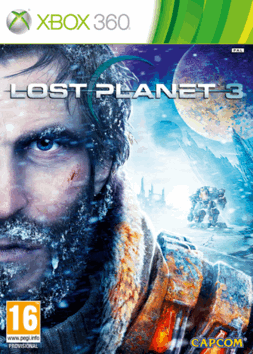 In Lost Planet 3 you’ll be taking the reins of marvelously bearded family man, Jim Peyton, who has journeyed to the coldest depths of the planet EDN-III to help make ends meet for his wife and child back home. It’s a tough, lonely line of work; his perilous rota of duties mainly include plodding around in a large mech fending off native beasties and syphoning as much of the coveted T-Energy as possible – which eventually leads to the inevitable ‘conspiracy within the ranks’ tale that ties in with the rest of the series. If you’ve played previous Lost Planet games you’ll also know the ‘beasties’ I refer to as the thermal energy blooded Akrid, who take a number of ungainly forms and have a temper towards those nasty Earth-folk trying to mine their icy planet.

Peyton is pretty uninspiring as a protagonist but it’s not because he’s poorly conceived. Cast as the average Joe trying to just go about his business and get home without too much of a fuss, he’s actually quite likeable and endearing as opposed to the disinterested anti-hero you’d usually associate with the typecast. The problem is, asides from the obvious care for his family, Peyton never portrays any real character flaw or depth and it works against the narrative later on in-game, especially when gameplay tails off and could really use strong main characters to sustain interest.

However, Lost Planet 3 does do well overall in its new story driven direction. There’s now far more reason to be attentive outside of the shooting, such as the recorded messages between Peyton and his wife that appear sporadically throughout the game. Voice acting is sincere, warming and accentuates the loneliness the icy world induces. The supporting cast also add something; Gale, for example, deals with Peyton’s rig (the game’s term for his mech) in an engineering bay and is the jovial yin-yang to the protagonist’s straight up approach and it has to be said that overall developers Spark Unlimited have done a good job bringing the characters to fruition, albeit a little lacking in depth at times.

EDN-III is certainly a beautiful place to traverse, especially as it would have been easy to lose focus on design when the entire planet is built around snow blizzards and icy peaks. However, for the most part the world looks and feels as harsh and unexplored as it should do whilst offering a darkly tense atmosphere thanks to eerie echoes and frequent mechanical creeks that set the soundscape nicely. There is the odd local that feels like it could have been made more distinctive, though. For example, when leaving the hanger in your rig for the first time, the view is underwhelmingly confined, rather than the expansive horizon you’re expecting after such a build up. The great lengths Lost Planet 3 goes to create suspense is sadly negated by its own doing sometimes, but overall the game’s presentation is a higher standard than previous outings.

Variety is potentially the greatest asset Lost Planet 3 possesses in the gameplay department. You’re tucked nicely into the bottom left of the screen in third person perspective (think Mass Effect or Resident Evil) to do all your on-foot work and upon entering your rig you’ll be moved into first-person with a cockpit style view. That’s where assets start growing thin, however.

The shooting – which is essentially why we’re holding a control pad and not watching a movie – is flawed in several areas. First off, it’s all just horrendously insipid. You’ll gather an idea of what’s to come during the rest of the campaign within the first 10 minute tutorial on route to base as you’re dumped off the vehicle to fend off several waves of Akrid. Later in the game you’re introduced to other generic creatures and bosses that might require you to shoot at the glowy red bits on their bodies, which would be fine if guns weren’t under-powered and the enemies coded to follow easily deduced patterns; you’ll spend far too long killing one beast that won’t even scratch you thanks to how predictable it is – it’s like fighting Legend of Zelda end battles from the last gen, but not nearly as difficult, entertaining or even fitting for this style of game.

Human enemies you’ll fight later in the single-player also show little sign of intelligent diversity; simply poking a head out occasionally so you can put them out of their misery (and your own). It’s a shame because the game shows promise initially. You’ll forgive the repetitive waves of the same unimaginative Akrid over and over because you’ll think something else is around the corner, but it sadly takes far too long to come. Even unique QTE’s that have you directing a blade into the ‘glowy red bits’ with the right stick fail to break the humdrum of combat, which from an actual trigger pulling perspective, might have actually been quite satisfying had the enemies been worth the effort and the bullet power turned up a little.

Climbing into the rig immediately gives you that feeling of power the weaponry in the rest of the game slightly lacks, albeit without any actual weaponry. Armed with nothing but a drill, a twisty-arm-claw-thing and a deck full of country-rock tunes, the rig is your main way to travel through the harsh environment and you’ll feel the epitome of cool straddling through the snow in your own personal mech. Unfortunately, after a while the novelty wears off and what was once cool becomes tiresome and tedious.

That’s because, by design, everything on EDN-III is broken – and I mean everything. You’re the go-to guy when something needs fixing; an iced-over piston needs restoring, a lift needs fixing, an iced-over piston that you’ve restored needs to be re-restored. You’ll never have played a game in which you’ll be so relieved to be given the fast travel option about half way through, as the cumbersome slow rig makes getting to your mission objective particularly labouring after a while.

The same can be said about your base of operations that acts as a hub, reminiscent of Hoth’s Echo Base in Star Wars. Here you interact with NPC colleagues that advance the story, offer shops to buy and upgrade your loadout and give you new missions and side quests. It’s not a new idea, but definitely a welcome one that breaks things up in between missions. Unfortunately everything is spread out to the point that traversing several corridors and lifts just to pick up a sidequest that wants you to go and grind out 20 kills in a manner that MMO fans have been trying to root out for years, just isn’t fun.

There is some enjoyment to be found sporadically throughout Lost Planet 3’s gameplay, though. The boss fights with your rig feel pretty darn epic when you’re asked to grab them with one arm and drill them in the goolies with the other. Then there’s the grappling synonymous with the series that offers an extra dimension to fighting, especially in cave areas where several levels are available to fling yourself to-and-fro. Oddities such as your HUD disappearing along with your ammo count when you’re in an area without a beacon and the general repetitive nature and unnecessary traveling means that overall, any enjoyment you might have will evaporate far too quickly.

The campaign does have decent length at around 13-15 hours but is very much dependent on how you choose to approach the long-winded grinding of side quests and collectable audio logs. There’s also a competitive multiplayer that’s solid without breaking too much of a sweat. Akrid survival multiplayer mode has players working against waves of Akrid before turning on each other, whilst other modes include teams of five extracting thermal energy, completing objectives or simple self-explanatory deathmatch style gatherings.

Lost Planet 3 is a slow paced, repetitive grind that’s more focused on the uninteresting journey to the action, rather than the action itself. What gives the game a glimmer of hope is the great character design, narrative and voice acting that just about manages to drag you through the linearity of what could have been a game of high merit, as opposed to one of resounding mediocrity.