Before this review begins, let’s get one thing straight, I love the Metal Gear series. Hideo Kojima is a living legend for creating one of the best series’ in gaming. With all the stealth-based titles getting much deserved critical success, Kojima Productions along with Platinum Games and Konami decided to create something a little bit different with Metal Gear Rising: Revengeance. Does it work as a hack and slasher, or have Kojima and co made a huge mistake? Read on to find out. 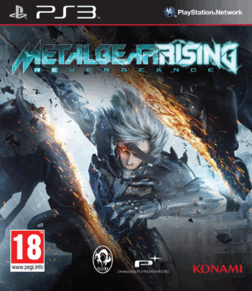 The Metal Gear series has always been known its deep and engrossing stories, and whilst Rising doesn’t have the richest tale to tell, it’s certainly one that will keep you interested until the credits roll. Without spoiling too much, Rising sees players take on the role of Raiden (Jack) who I’m sure fans of the series remember somewhat fondly from Metal Gear Solid 2. Raiden has decided to try and live a normal life whilst providing for his wife and child by working for a security firm called Maverick. As you can imagine, Raiden’s plans don’t really go to play out as he intends, as he sets out on a one man crusade against the game’s villains The Desperado Elite. Equipped with an epic cyborg suit and codec, Raiden sets out on a path to destroy the enemy and cause plenty of havoc in the process. Hardcore fans might be disappointed to learn that the story doesn’t really have a huge link to previous titles in the series, but it’s not a deal breaker as it still has somewhat of a Metal Gear feeling about it.

Having followed the development of quite closely, I was regularly impressed by the visuals in the trailers that Konami showed off leading up to the game’s release. It came as nice surprise then that the in-game visuals were even better than I expected. Some of the battle sequences are simply breathtaking, in terms of both scope and sheer graphical fidelity.

With such gorgeous visuals, I was expecting a drop in frame rate now and again, but I certainly didn’t encounter any which is testament to the work of Platinum Games and Kojima Productions. Whether you’re running through cities or crashing down buildings, everything about Rising manages to look fantastic. The visuals even have that unique Metal Gear look about them, which seems strange at first as you’re playing a hack and slash title, but fits in with the overall theme of the game. Hey, after all, it’s still a Metal Gear title.

Raiden? Raideennnnn! Yes, that’s right, the traditional Metal Gear player death vocals are present in Rising, albeit with a slightly different twist. I was expecting the game to head in a different direction in terms of in this department, but was relieved to find that the team have got the sound spot on. Quinton Flynn is back as the voice actor for Raiden, doing a great job just like he did in previous games in the series. It’s great to hear Raiden sound all serious one minute and then adapt a more humourous tone the next. As mentioned previously, the codec also makes a return and is somewhat of a highlight thanks to conversations with colleagues such as Boris and the Doktor.

When I heard that Rising was going to be a hack and slash title in the same mould as Devil May Cry, I’ll admit that I was quite worried. How stupid was I?! That worry wasn’t needed at all, as the hack and slash combined with some traditional Metal Gear elements makes for one unforgettable experience. Going through the game and battling your foes, big or small, just feels fantastic, especially when you enter Ninja Blade mode.

Ninja Blade mode sees time slow down by using fuel cells incorporated into Raiden’s cyborg suit, allowing you to slice and dice more accurately compared to normal attacks in real time. This allows you to cut off your enemies arm or head whilst also extracting nanopaste that is located in various parts of the foe’s bodies. Nanopaste is required to heal Raiden when he is low on health, so if you cut your enemy in the right place and press the O button before it reaches the ground, Raiden will collect the nanopaste, crush it in his hand and rejuvenate himself.

That said, whilst the attacking element of Rising is fantastic (I never really got bored of it), it’s not all about the slicing and dicing. Raiden’s blade is also the central point of your defense against the enemies and bosses that you encounter. It’s not just enough to press a button and expect to block every single attack. You must press the attack button whilst also press the direction in which the enemy is trying to hit you. Sounds easy enough, but with enemies coming at you thick and fast, true skill is required to defend against everything thrown at you. Another one of Raiden’s abilities is the Ninja Run and this comes in very handy during most escape sequences such as running through a burning building. Ninja Run also allows Raiden to run at a fast pace whilst also avoiding obstacles in his way, this includes gun shots. When battling more harder enemies and bosses, once their health is at a low percentage, Raiden can perform special attacks by pressing the correct button sequences that are presented on-screen. I absolutely loved performing these special attacks time and time again. Not only do they look incredible, you get a real adrenaline rush when you get them right.

In a similar vein to other titles in the genre, in Rising you have the ability to customise Raiden’s body via upgrades. These can be purchased with the use of your Battle Points in which you earn from defeating enemies. You can upgrade Raiden’s health gauge and even increase the strength of his blade, allowing you to defeat enemies a bit quicker. Your blade is also useful when it comes to the environment, as almost enough anything can be slashed into pieces. This includes support for bridges, which is great as it allows you to bring enemies to ground level and take them out with a bit more ease. For those worried about battles getting repetitive, there are enough combos for you to utilise so that keeps each battle remains challenging and fresh. Of course, if you don’t enjoy the head-on experience, the traditional Metal Gear stealth approach can also be adopted. Simply press your finger on the O when you are near enough an enemy (without being seen of course) and you will see Raiden carry out a devastating stealth attack. The mechanic isn’t as deep as traditional Metal Gear titles, but it’s a nice little nod to what made the series great in the first place.

There are three difficulty modes to choose from when you begin Rising – easy, normal and hard. I went for normal and there were times that I wished that I could’ve switched to easy, as some of the harder enemies and bosses in the latter stages of the game were very difficult. Not being able to switch difficulties mid-game is a minus for me, but a small one in the grand scheme of things. On normal the difficulty, the game took me a little over nine hours to complete, which might sound a little light, but is backed up nicely by a healthy amount VR missions that should add a couple of hours to the overall game time. If you fancy an extreme challenge, you can also go back and complete the game on a harder difficulty setting, but be prepared to die quite a bit.

Rising might be series a spin-off, but it’s a more than worthy addition to the already excellent Metal Gear series. The road has been rocky, but in the end Kojima Productions and Platinum Games have done a fantastic job. It’s over-the-top, hack and slash fun with a sprinkle of Metal Gear thrown into the mix. I said at the start of the review that Hideo Kojima is a living legend, and Rising has done nothing to change my mind.