It’s been a good few years since the last major Metal Gear release on a console, but Hideo Kojima and co are back with Ground Zeroes. Much has been said regarding the game’s length and content, yet little about its quality. Either way, it’s here now. Is it just a glorified demo? Read on to find out. 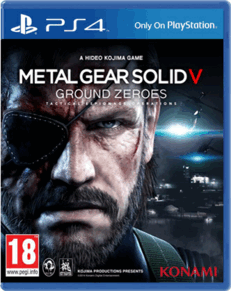 I’m a huge Metal Gear fan. Sorry, but I just wanted to get that statement out of the way now. You know, to give you a bit of context going into the review. That said, I was little concerned when I started hearing rumours that Ground Zeroes was only two hours long. I mean, I knew it would be a tad shorter compared to fully fledged Metal Gear games, but two hours?! After playing Ground Zeroes at a review event and in the luxury of my home, I was relieved to find that isn’t really true. Not only that, but Hideo Kojima has crafted another fantastic Metal Gear experience.

Breaking it down, Ground Zeroes is made up of five missions. The main one is Ground Zeroes itself, set after the events of Peace Walker, tasking Big Boss (aka Naked Snake) with rescuing Chico and Paz from military base known as Camp Omega. If you’re a Metal Gear veteran, you’ll know every word of that last sentence like the back of your hand. However, if you’re not, there is a backstory option (a Wikipedia of sorts) present in the main menu that kind of gets you up to speed. Let’s face it though, if you’re interested in Ground Zeroes, you’re more than likely a fan of the series already. Still, there’ll be no spoilers here, but it has to be said Kojima’s storytelling methods have most definitely improved, servicing the gameplay superbly. There’s not a whole lot of story in Ground Zeroes, but what there is damn special. Cutscenes now blend seamlessly into the gameplay, so much so that you’ll barely notice the transition or a difference between the two. Not that I hated them, but expect hour long codec chats to be a thing of the past too. The chatter is still present (you can press L1 to initiate it), but now it takes place as you play. When the focus needs to be on the story, it’s most definitely there, but in Ground Zeroes gameplay is king. Oh and it’s a bit special.

Gone is the radar most Metal Gear fans will be used to, replaced by basic map you can access by bringing up Snake’s iDroid (a tablet of sorts). You’ll find no highlighted enemies on there, no cone of vision and no real objective markers either. Instead you have access to binoculars, giving you the ability to tag enemies if you spot them for a few seconds, but the onus is on you. This is stealth gameplay in its purest form, and it’s marvellous. Nothing about it feels contrived or staged, it’s truly organic. You’re left to decide which route you want to take, how you want to take enemies out and find the objective. It’s an amazing stealth sandbox. Sneaking around and completing a section (or an entire mission) without being seen is an immensely satisfying experience. If you’re not totally comfortable with stealth or just a newcomer to the series, the addition of the reflex feature is good news for you. Here you’re given a kind of a second chance if you’re spotted, with the action slowing down for a few seconds. Don’t worry, if you’re a hardcore player, it can be turned off and it’s something I recommend doing for a pure stealth experience. When it comes to being stealthy, I’m more of a tranquilizer gun type of guy anyway, but I do love a spot of CQC (close quarters combat) too. In fact, Snake Eater aside, I’d say it’s probably the most I’ve used CQC in a Metal Gear game. It’s damn good, now giving you the option to knockout, kill or interrogate once you’ve grabbed the enemy. The latter option branches out, giving you the ability to ask for information or tell the enemy to call one of his mates. Clever, so very clever. Kojima wasn’t lying; this is true open-world tactical espionage action. Ah, that last word, action. Usually a deterrent to most Metal Gear fans, but here it’s a very much a viable, fun gameplay option. Going down this route won’t net you a high ranking, but with the “toys” present in the Camp Omega playground you’ll want to give it a try at some point. Trust me. Do it.

Okay, so you’re probably thinking “he hasn’t mentioned length yet?” Don’t worry, I’ll cover that now. As I mentioned earlier, Ground Zeroes is just one of five missions present in the package. My first playthrough of the Ground Zeroes mission took around three hours, and I enjoyed every second. It sets up Phantom Pain superbly, it really does. I’ve since gone back and played it six or seven times, playing it slightly different every single time. Mainly because I wanted to get the S rank (still haven’t got it), but also because it’s incredibly fun to try different play styles. It hasn’t taken me three hours every single time, more like 25 minutes to an hour, but that’s to be expected as you get to know Camp Omega better. Then you have the four other missions, which I won’t ruin for you, but they all cover different styles of play and fall somewhere around the hour mark. Each mission is enjoyable in its own little way, showcasing the diversity on offer in Ground Zeroes and teasing what is possible in Phantom Pain. The fifth and final mission is special, unique to the console it’s on. The PS4 version (one I played for review) features a Déjà vu mission, recreating the events of Shadow Moses (Metal Gear Solid) in Camp Omega with PlayStation One visuals. It’s a nice little touch, but you’ll have to work to unlock as you need to find and collect all XOF patches littered around Camp Omega. Good luck. Anyway, all the above comes together to form at least seven hours of content. Throw in unlocks and the immense replayablity of the Ground Zeroes package, you’ll have hours upon hours of fun if you’re anything like me. I’ve spent around 10 to 12 hours with the game so far and my completion rating is still just 25%. To think, it’s being sold at most online retailers for £22-£28 depending on console. A stealthy bargain if I ever saw one! The only minor criticism would be that it’s just one area, Camp Omega. It’s a decent size, but I guess we’ll see the true open-world in Phantom Pain, with horses.

It’s worth touching upon how amazing the game looks on the PS4, I mean just look at these screenshots (a couple taken directly from my console using PS4 share). The lighting, environment and Snake’s detailed character model all look incredible. Running in 1080p at 60 frames per second, backed up by the impressive Fox Engine, it’s truly a sight to behold. On more than one occasion I found myself moving the camera around to take in the visual splendour, to my in-game detriment I might add! Snake in a glistening wet rubber suit as the rain falls down on him… Yeah. Moving on, the voice acting is of a high standard too. I know there’s been some negativity around David Hayter not voicing Snake (it is a shame), but Kiefer Sutherland does an amazing job. No, really, he does. I didn’t find his portrayal of Snake jarring or out of place at any point in Ground Zeroes. If anything he brought a certain level of grit and realism to Big Boss’ character, which is probably the biggest compliment I can give.

As a prologue to Phantom Pain, Ground Zeroes more than does its job. Where most Japanese developers have fallen behind the West, Ground Zeroes shows that Kojima and his team have listened, watched and adapted to the current gaming climate. Not only does Ground Zeroes set up Phantom Pain superbly, it strips away all the unnecessary fat, showing everyone that Metal Gear and Kojima still own this genre. Make no mistake; this is stealth gameplay at its finest. Now, can we have a release date for Phantom Pain please? Pretty please?!