Following on from the novel inspired Metro: 2033 released back in 2010, developers 4A Games have finally brought us a sequel in the form of the long awaited and twice delayed, Metro: Last Light. But has this tense, post apocalyptic first person shooter managed to bring enough to the genre to warrant its own survival? Read on to find out. 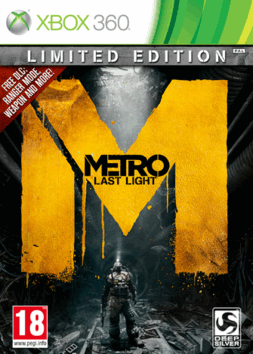 Like Last Light’s predecessor you’ll be playing the role of Artyom, a Russian survivor of the nuclear devastation humanity thrust upon itself through war. Thanks to surface-wide radiation and infestation of dangerous mutants the remaining Russian population is forced into the underground Metro stations to live out the remainder of their existence – one that entails pre-apocalyptic ammunition as currency and a whole lot of eerie echoes and down-right creepiness that tends to come with claustrophobic, dimly lit tunnels. The narrative finds strength in its foundations such as that impeccable atmosphere and its side plots involving three of Metro’s main opposing factions – The Reich, The Polis and The Reds. However, the central focus is back on The Dark Ones.

Metro: 2033 gave you an important choice to make at the end regarding whether to save or destroy the imposing, mysterious race. For those who played it that far might be aggrieved to find out that the latter choice has been evoked on your behalf to suit the plot of the sequel. Imagine spending several hours of woo’ing Ashley in the Mass Effect series, only for you to be coerced into a sworded torrent with Liara in the follow up without your gaming consent – yes, it’s that devastating. It does make a better choice for the purpose of a sequel though; the dark ones are pivotal to the plot and when a lone surviving Dark One is discovered, Artyom’s special bond with the creatures creates another moral struggle for the protagonist as he ponders whether or not he made the right choices in the past.

Whilst the story starts inherently strong, towards the end it begins tailing off a little. The conflict between rival factions is gritty and interesting but instead Last Light ultimately veers off into other territories – realism is disregarded for a more mystical intent, whilst characters that potentially have so much to offer never really get developed to their fullest. Thankfully, exploring during downtime and soaking up the endless amount of conversation that occurs around you will inevitably immerse you in the world. There’s literally so much to overhear as you traverse the game that you’ll understand the survivors dilemma and build a strong context for the situation you’re in.

Potential plot deviation aside, the visual world is a far deeper and more engrossing one than the previous instalment. Artyom’s surroundings are bleak and battered, but a rendered with care and attention to detail. Moving from the dark, overcrowded underground to the harsh environment above ground does manage to provide a stark contrast without really changing any of the colour palette to any great extent. Don’t take this bleakness as a negative, either. The world draws you into an environment that pertains to a sense of little hope, yet constantly offers a glimmer of it through its visuals; the promise of sunlight breaking through clouds, cosey social gatherings and dancing girls performing in the depths of a beaten-up station. Problems with frame rates and even screen tearing are present as the Xbox 360 struggles to keep up with the game’s ambition, but despite a few moments of immersion killing, Last Light paints a good advert for Glukhovsky’s novel.

The leap in general gameplay compared to 2033 is also impressive. Last Light is a much tighter, refined experience and can without doubt can consider itself a major player in the shooting genre thanks to its highly improved AAA sensibilities. Shooting, whilst being linear and feeling a little stiff at times, is particularly rewarding. Also, despite only a small array of upgradable weapons to plough down mutants and bad guys with, you’ll still find there’s a lot of fun to be had from a combat viewpoint. I found visiting merchants to upgrade not that necessary, sometimes even forfeiting the opportunity altogether. Infact, Metro: Last Light has a running theme of making all the right noises without substantiating the need for them to be made in the first place.

A good example of this is where the game really begins negating itself, the enemy AI. Stealth opens up several approaches to gameplay and there’s a plethora of nice touches to really engross you in the act; twisting out light bulbs and blowing out lamps to prey on your enemies through the shadows are good examples, same goes for the genre’s now customary silent kills from behind. You can knock them out too but it seems a pointless venture to leave anyone alive – you’ll have passed the area long before you’ll even begin worrying about them regaining consciousness and the game doesn’t entail any moral stance. The biggest problem is that being careful altogether becomes a fruitless venture once you’ve realised how predictable and ungainly the AI can be – you’ll only be quenching your own thirst for stealth because the game certainly doesn’t require it, despite making it feel consequential to the player from the beginning.

Of course, there’s those ultra cool additions that help you forget about the negatives. The first time you climb up from out the metro to see the surface immediately makes you want to climb back down the ladder; it’s harsh, scary and intimidating. You’ll have to collect filters for a gas mask that allows you to breath above ground and you’ll constantly be made to feel uncomfortable in it as you’re tasked to wipe it when vision becomes too blurry. The surface also presents danger in the way of mutants. Vicious and aggressive, almost unfairly so as they charge at you in packs and from all angles. The way Last Light breaks up into sections by using underground and overground segments gives the game a steady flow and doesn’t become repetitive or dull in spite of its linearity. There’s also a nice balance between frantic shootouts and unhurried sections that allow you to soak in the dire, soul-sucking atmosphere – and you’ll undoubtedly want to because it’s seriously good.

Ultimately, Metro: Last Night provides an atmosphere of the highest quality only tarnished by some half-baked artificial intelligence, some awkward bugs and a slight lack of longevity. You’ll be quite comfortably guided down a beautifully crafted path for nine to ten hours if you’re familiar to first person shooters, but after that there’s little to go back for. Notes to find and all the loot to scavenge fits into the same category as the game’s stealth and shooting mechanics. That’s to say there’s nothing particularly new here, but as far as conforming goes, Metro: Last Light does it admirably.