It’s strange to think that it’s been eight years since the first Mirror’s Edge game was released. That is almost the lifespan of a console generation and a lot has changed in the industry in that time. Many thought a sequel to the free-running adventure would never materialise, what with it being a commercial failure and a difficult beast to market. It’s a first person shooter without the guns? It’s a platform game but you can’t see your character? A lot of people were confuse what to expect, but most of those who gave it a chance fell in love with the strangely hypnotic rhythm of jumps, slides and hurdles, along with its unique aesthetics. 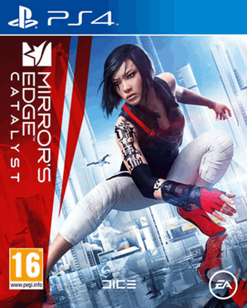 The main way in which Catalyst differs from its predecessor is that it is an open world game now, rather than a regimented linear story-based one. Faith can now choose to start story missions, side quests or challenges, for example, from the open world hub, or to simply run around, finding out new ways to traverse the city. Sadly there seems a paucity of interesting things to do in this open world. There is a wanted system in place, which involves a badly-implemented escape and hide mechanic, safe houses to enable fast travel (but isn’t the very running around the main point of the game?), and a myriad of repetitive fetch quests and races. Many collectables also appear throughout the map, but they only serve to grind out XP, without the player having any real enthusiasm to collect them all.

Whilst the open world setting lends itself to exploration and experimentation to find the best and fastest routes across the skyline, it also tends to detract somewhat from the story pacing. Whereas the first instalment was focused and tight in guiding you along a certain path, Catalyst allows you to amble and explore. What is gained by freedom in one hand is lost as the effect of the overall story is diluted. I found myself less driven to find out what will happen next, and less invested in what was actually motivating Faith and company.

But that might be in some part down to the pretty lacklustre storyline and character development. Although Dice were clearly trying to introduce an interesting story – that would build on what we already know about Faith from the original and give her more backstory and motivation – this largely falls flat. Whether it is because the pacing feels so off, being an open world game, or that none of the characters are particularly likeable or unique. In fact, almost every male runner looks identical, the development of Faith’s family drama is very predictable and heavy handed, and a rushed love interest feels pointless. This is very sad, because the simple story in the first Mirror’s Edge allowed the gameplay mechanics to shine through as the stars of the show, whereas the plot in Catalyst sadly only serves to muddy the whole affair.

At least the gameplay itself is still solid. The Parkour traversal system feels more fluid than before, with more emphasis placed on momentum and trying to never stop moving. You can string movements together with ease, and new traversal talents help to make you feel like an experienced free runner. A lot of these skills are held back from the player by an XP progression system – and whilst this is perfectly normal for a lot of games, the issue I have with it in Mirror’s Edge is that many areas or side missions that you can access right from the start of the game are locked off for the player, as you don’t have the required talents yet. Many moves can be unlocked really quickly in the first hours, but some remain locked away for a good portion of the runtime. It also makes the online challenge mode pretty pointless until you are fully upgraded, as how can you post decent time trial scores when you don’t have the whole arsenal of moves at your disposal. You wouldn’t bother taking on Usain Bolt in a sprinting race if you were just Joe Bloggs off the street.

Where Catalyst is at its strongest is when you are tasked with puzzling sections. These puzzles of course consist of platforming and trying to find your way around a maze of lasers, or climbing a seemingly impossible tower – but these feel like the purest parts of the experience. Here you need to combine all of the talents you have learned to reach your objective. When left alone with a clear goal to meet, the mechanics of free running are allowed to shine through.

Online features are implemented in a very fluid way, which fits in with the overall theme. Time trials can be created and dropped on the map by any player at the touch of a button, which can then be shared with the whole world seamlessly, without ever entering a menu screen. Taking part in trials created by other players is just as simple – where you can see them dotted around your game world, and simply select one to run through as you pass it by in-game. These aren’t deep features that will keep you coming back forever and ever, but the opportunity to create dizzying runs and then challenge others to beat your best time suits the Mirror’s Edge exploration ethos and doesn’t intrude upon the rest of the gameplay experience.

One of the biggest gripes in the first title was the poor gunplay but Mirror’s Edge Catalyst removes that completely, as only your enemies use guns and Faith has to make do with melee alone. This works well as an extension of the free running, as you can both pull off mid-air attacks that cause high damage – but also keep you on the move – and also build up a momentum shield which protects from incoming bullets, as long as you just keep running. The idea that once Faith has reached top speed she can dodge bullets somehow is a silly one, but one that makes perfect sense in practice. If you want to let players feel like a brilliant free runner, why let a few little bullets get in the way? You should be able to avoid this, and string together attacks just like you chain jumps, slides and rolls. That doesn’t quite work out though, as enemies get in the way of each other, combos don’t feel satisfying and each combat skirmish tends to devolve into the same repetitive muddle of circling your opponents and kicking them into one another.

Visually, Catalyst is a strange beast. Its city is far more detailed than that of the first Mirror’s Edge, however that somehow doesn’t seem like an improvement. Mirror’s Edge was so bare bones that it appeared strongly stylised. It felt like a design choice, that the minimalistic approach had been taken, which would provide a stark contrast between the over-sanitised corporate world and the grimy world of the runners. Catalyst however brings more detail to the city you play in, but not really enough – perhaps limited by the need to keep framerates high, and texture detail low. Now it sits uncomfortably somewhere in the middle – not minimal enough to be a bold design choice, nor detailed enough to be visually impressive for its realism. As such it feels like a missed opportunity, and certainly not a step forward in the series. Thankfully Magnus Birgersson (also known as Solar Fields) has returned to supply the same kind of electronic soundtrack that compliments the futuristic setting and high-intensity action so well. Disappointingly this music isn’t used freely throughout proceedings and there are large periods of time when you are left with near silence – it is still a great accompaniment when it is there, but it feels like it is used too sparingly.

Mirror’s Edge Catalyst still feels like a lot of fun to play through, as the parkour system remains a really successful mechanic for navigating the game world. Dice have made a lot of changes that both hurt and harm the series, but at least you couldn’t say that this is a lazy re-working of an eight-year old game. Whilst the move to an open world affords the player freedom to explore and find your own fastest routes through the city, or challenge you to better yourself through time trials and the like, it just doesn’t feel like there is enough variety of missions or objectives on offer to make the effort worthwhile. The journey is a lot of fun, but the destination sadly isn’t exciting.