It’s no secret that the Monster Hunter series makes the Japanese go crazy. A bona fide system seller on the eastern continent if ever there was one. However in the western hemisphere it has never quite shaken of it’s niche cult status. Does Monster Hunter 3 Ultimate do anything to buck this trend? Is it deserving of your attention? Let’s find out! 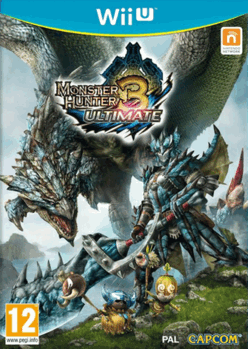 Considering Monster Hunter 3 Ultimate is a refined port of a PSP game, the improved graphical detail is impressive. However, there is no doubt that from a purely technical stanpoint the title is lacking and is far from pushing the Wii U to the brink. It is a good job then that Monster hunter does such a great job in the design department. The individual characteristics of each monster help reinforce the immense amount of thought that has gone into their animations and only serve to make each challenge that much more epic.

For the most part the sound design is on par with the attention paid to the monster animations themselves. From the distinguished roars of each monster to charming Japanese style sound effects. There is nothing like hearing the anthem of “Oooo so tasty” after perfectly grilling that piece of raw meat you just barbequed perfectly. It all reminds you of where this games heritage lies, which isn’t necessarily a bad thing, depending on your point of view. Even the soundtrack is sufficiently addictive, from the title screen all the way to the mid-hunt tunes.

The premise of the Monster Hunter series can be summed up in one sentence like most things – Brave the wild, seek out the big ass monsters that inhabit it and take them down – But this simple summary does the series no justice so let’s start at the beginning.

In what seems like an attempt to lower the entrance bar into the series, Capcom have seen fit to turn the opening quests in Monster Hunter 3 Ultimate into a mini tutorial. They are quite obviously meant to teach the basics of the game by introducing you to the control scheme and sending you on mundane fetch quests. Now while it could be argued that these do alleviate some problems new hunters might face, they’re quite simply too boring for new and old player alike and completely misrepresent what the game is all about – Learning from your mistakes and teaching yourself. What makes things worse is that the rest of the game is completely devoid of explanation, further adding to player confusion. Similar to the notoriously difficult Dark Souls, this is a game of experimentation.

Now that, that is out of the way, lets talk monster hunting. Like any great hunter will tell you, your weapon and equipment is at the center of everything. The weapon you choose will basically decide which of the games classes you will be playing. Right from the off you will realize nothing comes easy, as each of the games twelve weapons dictate how you will go about fighting the behemoths you will be hunting. Each is deceptively simple to get the hang of, but as you progress you will discover how they differ, addition combination attacks and where you should be attacking your foe. Do you prefer to prance around these deadly creatures, getting off faster less damaging strikes with a sword and board/dual blades? Are you a master of the hammer, who relishes the idea of caving in a monsters cranium while dodging ferocious attacks? Or do you prefer to cleave off limbs with ease with a long sword? The choice is yours.

The weapons are complemented by your hunting equipment, which can be acquired by the simple crafting system. Combine two items and you will be gifted with the resulting combination, from traps to ammo, tranquilizers, bombs and even armour. Each will be crafted from materials you acquire on the hunt itself, whether from the environment or the monsters themselves and each is important in it’s own way. This is where the notorious intimidating nature of the series starts to rear its head. Essential items are also crafted this way and with no explicit recipes it can be quite confusing as to what to do next. For example, you may be asked to capture a monster, but to do this requires traps and tranquilizer bombs, the existence of which is not even alluded to in the game, let alone taught the ingredients needed to make them materialize. This can lead to a potential situation where you are wondering around not sure what to do. However, it is also simultaneously one of the best aspects of the series.
Hunting down the required monster materials to craft that epic armour set/weapon you have been pining after for 4 hours is beyond satisfying, whether you are solo or in a group (more on that later). But all this would be redundant if the main aspect of the game – Hunting the monsters, was no fun at all. Luckily it’s the most satisfying aspect and surprisingly in-depth.

Hunts are divided into hunter ranks, which means you will need to earn the right to annihilate the larger more difficult beasts. As you progress through the ranks, they become stronger, larger and more difficult to pin down. There is a surprising number of beasts on offer and each has its own unique traits, weakness and strengths. For example each monster has different weak points, where they will take more damage depending on the weapon you are attacking with.

Monster hunter does everything its power to make hunting these beasts feel like an epic struggle. To succeed you need to pay attention to your prey. Life and stamina bars are notable absent, requiring you to use your judgment and the signs each monster gives you to tell whether they are on the brink of death. Should a monster become tired, it will begin to slobber and move slower. Get it on the brink of death and watch as its fight or flight instinct kicks in, sometimes tripping and stumbling over it’s own feet as it tries to retreat to another part of the map. See a mighty ear-shattering roar? Screen blur and shaking inclusive? Then you might want to watch out for the enraged beasts mad charges. The game is rife with visual queues and is all the better for it. All in all the culmination of preparation, taking on a beast for the first time and figuring out how to beat it feels so rewarding you can’t help but want more. Throw in a multitude of armor sets, weapons, and a wide selection of potions, traps and doohickeys that all seem to be useful in one way or another and you won’t be leaving this beautifully crafted game for a long time, but the best is yet to come – Multiplayer!

Monster Hunter truly shines when team dynamics are introduced. Almost every quest in the game is doable with a team of hunters. Remember those twelve weapon types. Now imagine, just like any good MMO, four players plotting and scheming how to take down their next big kill. It adds a whole new dynamic to proceedings, as well as alleviating the stress of grinding materials from monsters you have killed 7 times already and is personally the best way to play the game. The teamwork only serves to reinforce the reward factor. Sadly, the 3DS version is devoid of online multiplayer, so you will be restricted to local play should you want to team up with friends.

This title is not without it’s drawbacks however, the biggest offender being the camera. Despite being player controlled, should you find yourself between any wall and a monster of moderate size, it will spasm out of control. This wouldn’t be such a big deal if it didn’t take up to 50 minutes to take down some of these monstrosities and they didn’t hit like a two tonne truck! Suffice it to say, these moments of failure can really screw you over royally. The other annoyance being the length of time some player animations can go on for. Now I understand that, this was most probably a design choice to introduce risk reward factors during a fight, but when I have to sit there for 3-4 seconds while my character not only drinks her potion, but takes it upon herself to cheer afterwards (yes cheer! In the middle of a fight) I become a little annoyed. However, to let this stop you from enjoying the intricacies and depth Monster Hunter has to offer would be a crime, one you would not be forgiven for.

How long is a piece of string? Seriously, this is not the game for those who have time constraints. I have easily put over 70 hours into this mammoth beast and the end is nowhere in sight. Even if you do manage to reach the conventional end and conquer G-rank, Monster Hunter still has so much more ways for you to challenge yourself. Arena type modes make an appearance and a decent stream of updated monsters for you to face via DLC will keep you busy for months to come. Not to mention the urge to collect every awesome looking item in the game.

There is no question that Monster Hunter 3 Ultimate secludes itself in the niche corner of gaming due to its (very) hidden depth and reluctance to teach you all but the basics, but I believe this is what makes it special. The perceived wall of intimidation it uses to protect itself from the mass market Call of Duty player is scalable and nothing but reward awaits you on the other side.

Just like the shy, smart kid in the playground with one friend, should you get to know Monster Hunter 3 Ultimate you might find you actually really like it. Your only question should be, “do you have the time to invest?”