I’ve always found it funny how some genres of games are just supposed to be a certain way and this is accepted. Take fighting games for example – a genre based around competition and bettering your opponent, physically and mentally. What possible use could we have for a single player campaign? Yes, it is there, but it is but a distraction. Real men fight real opponents. It has always been this way and so it shall remain. Then NetherRealm Studios comes along like Galileo at a Roman Catholic Church and says “Well, actually guys…..” 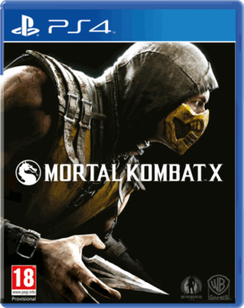 To be fair NetherRealm have been doing this for a while now – that being story modes that are worth a damn – but this is the first one that has caught my attention for a long time. That might be sacrilege to those ardent NetherRealm fans that never stopped playing past the golden days of Mortal Kombat 3, but for the rest of us this is a shocking revelation. In case you are still wondering and need it spelled out, yes, I very much enjoyed the story mode in this game. It won’t be winning any interactive storytelling awards, but it’s about 12,000 steps in the right direction for the genre. Add to this, the fact that it forces you to at least learn the basics of around 60-70% of the cast due to the way it is structured and you have an entertaining, somewhat educational mode that won’t make you feel like you just wasted 40-90 mins of your life.

The single player bonanza does not stop there though. if getting your ass handed to you online is not your cup of tea, but you still harbor fond memories of gruesome fatalities and visceral combat, then there is quite a bit of content for you here outside of the standard time attack, survival modes you normally see in the genre. But before we go there, I would like to talk about the one weakness of Mortal kombat X’s single player content – the tutorial. This thing is abysmal and is the only part of the game I can see that has taken a step backwards. It serves no purpose but to have you contextually hit buttons on command without any of the actual context. Sound silly? That’s because it is. If you hope to learn anything about this game outside of X is punch and O is kick (sorry Xbox fans) then you need to look elsewhere.

Your next stop on the Mortal Kombat express, will probably be the tower mode. NetherRealm does love to hit you with that nostalgia. Similar to old school Mortal Kombat titles, you will be working your way through a ‘tower’ of enemies. There are three variations (get used to that word), traditional, living (these change over time) and tower challenges. The last one is particularly appealing if like me you are particularly competitive. After besting the AI you can challenge your buddies to do it better than you. Each style of tower has five different variations, including the fabled ‘test your might’ mini games i used to love as a kid, and the admittedly more entertaining ‘test your luck’ mode, which can also be played separately. The latter adds wonderfully strange, entertaining and sometime frustrating modifiers to your fight giving things a unique twist. Suffice to say, that if you enjoy any of these modes, you will be playing them for awhile.

Training mode is the last option, and is packed with enough features and recording capabilities to keep you competitive. Even the new fangled variation (say it again, I dare you) system has been catered for here. Need to switch on the fly to access specific moves for your variation? No problem, but more important is the frame data. Frame data for everything, start up frames, active frames, recovery frames, cancelable frames, its all here and more than welcome. Hell if not for the omission of hitbox data, I would put this alongside Killer Instinct as best training mode in a fighting game.

Last but not least is the Krypt mode, which is probably the most interesting take on an unlock system in a fighting game I have seen. It is very reminiscent of those old school dungeon crawlers we used to play (kudos to you if you are old enough to remember what those look like), even down to its grid based map, first person view and enemies that jump out at you from nowhere. This is the only way to unlock alternate costumes, music, brutalities and artwork without paying real world money. Instead you will be using the in-game currency accrued by completing most activities in the game. Because, let’s face it , what’s a modern day game without an excuse to make you pay more money for content already on the disc. I can’t say I completely understand NetherRealm’s decisions here, but you are are not forced to pay.

The other currency in the game are faction war points. A novel idea if slightly ineffective. The moment you boot up the game you’re given a choice of five known factions in Mortal Kombat lore. Playing the game unlocks these points and after a period of time a winner is declared. Members of that faction win awards like more faction fatalities. Problem here is that most people gravitate towards two factions in particular, making this ‘war’ rather two sided and unfortunate for you if you like one of the other three factions. I commend the idea, but the lack of foresight in the execution leaves the mechanic feeling a little redundant.

Online, Mortal Kombat X has its fair share of modes too and is somewhat reminiscent of Injustice. Makes sense right? Same studio. So you can expect standard Versus, Team Battles return from Mortal Kombat 9, King of the Hill and online Tower Battles (yes you heard me, single player modes infiltrating online). This is all great in theory, but these modes are all very reliant one thing – NETCODE! Sadly, as things stand this is Mortal Kombat X’s biggest weak point. With the recent resurgence in fighting games as a genre, it is unforgivable for any modern fighter to have bad netcode. With the increased processing power, this is something that should have been left far, far in the past. Since launch there has been a patch to improve its stability, but in reality all it did was take the netcode from being almost useless, to just plain bad. This isn’t to say you can’t squeeze some enjoyment out here. Like licking the cookie dough from the bottom of the bowl, you will have a brief moment of ecstasy when you find a semi decent connection between you and your opponent, but then the moment passes and you realise there is no more cookie dough. If feel most people would agree that when the character select menu in your games online mode is lagging, you know you have a problem.

So what about the Kombat (couldn’t help myself) I hear you say? The main party trick here is variations. Each character gets three and they all change the playstyle of that character. It’s somewhat reminiscent of the V-ism system in the alpha series, but instead of altering the game mechanics themselves it alters around 20-30% of the characters moveset. It might not sound like a lot, but this can change that characters playstyle dramatically in the most extreme cases. Problem is, at the moment most of the cast only have one really effective variation, while the other two are not yet really taken seriously. The good news is that it is still relatively early days with plenty of time to change the current dynamic. Of course if you are playing purely for fun amongst a small circle of friends this means very little to you. Instead it means that you effectively have triple the cast members to play about with, which is always fun. Like all good fighting games, there is an air of accessibility here, with a deep complex center at its core

In short I believe Mortal Kombat to be the king of variety (will it never end?) in fighting game terms. If you like your solo adventures you are catered for. If you are competitive in nature then the wealth of options afforded by the variation (nope, it won’t) system should keep you interested. Just keep your activities offline and pray that NetherRealm eventually sort out the netcode.