Motocross fans rejoice! An official video game has arrived for you to play. MXGP is a fully licensed game so fans of the sport can look forward to recreating some great moments, but does the game deliver a reliable and fun gameplay experience? Read on to find out. 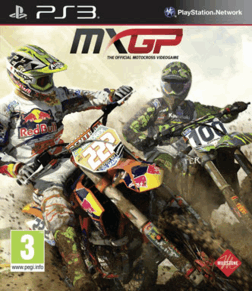 Graphically you are looking at a game that does it’s job. It is pretty but in the next gen era it’s difficult to get excited over current gen graphics. The tracks and dirt however are a point I would like to highlight. I was impressed by how the track reacts to the bikes, seeing the dirt move and spurt. What I wasn’t impressed by though is the detail. While character models for the riders might be acceptable, for literally everyone else who makes an appearance in the game, they are very poor. It was hard for me to feel like I was watching a game trying to simulate real life when the girl getting ready to let us race looked a bit deformed.

One more plus regarding graphics is more to do with the presentation. Like most US sports games, presentation is pretty much spot on. The game does a good job of taking you everywhere the sport does. Thanks to the pre-race preperation and with this being a fully licensed game you get everything you could want to help simulate the MXGP experience.

The audio in the game is not bad at all. The soundtracks suits the game nicely and they have nailed in-race sounds. There’s nothing else to say other than the development team have done their job nicely here.

The control scheme sounds great in theory but in practise is much harder to pull off. You feel as if your focus is being pulled in too many different directions. The left analogue stick is used to manoeuvre the bike, while the right stick moves your body. You need to use your body to help counter balance your bike and stop you from either going off course of loosing speed when turning. It sounds simple, but add that to keeping track of the course, your opponents as well as your actual place in the race and you’ll find your attention is spread pretty thin. This may well be my skill level coming in to play, but I found it very difficult to get to grips with the controls despite a fairly deep tutorial when you first load up the game. I am sure that with more time some people will get to grips with the controls better than I did, but in the time I’ve had with the game (several hours) it never really clicked.

Unfortunately that’s not where the negatives end. Transitions between jumps and landings are poor, with the same going for crashes. When you do crash, it looks like your driver has automatically become a flimsy crash dummy. It looks very strange and unnatural. There are a some neat things though. Bikes are customisable so you can create your perfect ride to help you on course to a championship.

Career mode lets you start a career as a chosen driver, you have a certain amount of preset faces, which is frankly quite limited. To be honest, the whole creation process is limited. There is nothing in depth, forcing you to be someone that has almost been chosen for you. You then go through your MXGP season racing on all the licensed tracks. The better results you get the more likely you’ll be able to sign a contract with a MXGP team and then push on to win the championship. Along with career mode you have all your standard racing modes. Instant Race is your first option, this takes you straight in to a race and skips all the unnecessary stuff to dive you right in to the action.

Grand Prix is next. Again, this mode does what it says on the tin. The sane goes for Championship. This is really the stripped back Career Mode, for those who want to take part in the real life championship but don’t care about creating their own character or signing up to a MXGP team. Then you have Time Attack which is all about finishing tracks with a best time; this is another classic racing mode.

The game will have plenty of longevity for fans of the sport. If you’re a newcomer, I’m not sure how much patience you’ll have in trying to tackle and immerse yourself in it. I had put a fair amount of time into the game for this review, but I doubt i’ll pick it back up after. Multiplayer will add some more to those who want to play with friends,but not that much I’m afraid.

MXGP is a game that is most likely appeal to the niche market of motocross aficionados. You will need to be a fan or at least have some interest in the sport to fully appreciate the content on offer here. If you don’t then its complexities and details will be pretty much wasted on you. It requires a lot of patience to learn and most gamers may not have enough to last the course of a race as they crash repeatedly.