It’s no secret that 2K Sports make good games, especially when it comes to the NBA 2K series. Well, that’s what I’ve heard anyway. You see I’m not really into basketball, and I’ve never let myself get dragged into the NBA 2K hype. I’m a football guy, spending the majority of my time with FIFA and PES, but this year the opportunity to enter the world basketball and NBA 2K14 was an opportunity too good to turn down. Did it match the hype surrounding it? Read on to find out. 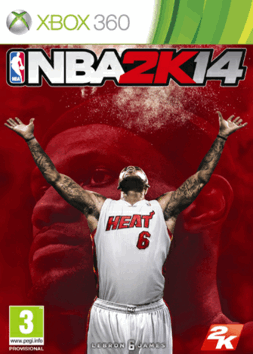 2K sports are head and shoulders above the rest when it comes to creating the most authentic looking sports title. EA and Konami do a good with their respective games, but ultimately they don’t come near what 2K Sports has done with NBA 2K14. The attention to detail, right from the crowds to players or court to the ball itself is second to none.  Everything looks so slick and natural, withe each individual animation being a true sight to behold. The best looking sports title? Hell, yes.

NBA 2K14 delivers with its audio too, immersing you in the modern basketball experience. The sound of the players boots sliding across the court is perfectly replicated, whilst “swoosh” sound as you sink a perfect three-pointer is just like music to your ears. Crowds are suitably loud as well,  groaning at poor plays or hollering to try and put an opposing player off a free-throw. Commentary is where the audio really shines though, it put every other sports title to shame. Every single word uttered is fluid, complimenting the action on court down to a tee. You really do feel like you’re watching a live broadcast on ESPN, it’s that damn good.

I remember playing basketball in school and enjoying it, but as stated at the beginning of this review, it has never really been a sport that I’ve loved or truly followed. I still watch the odd match now and again, but I’m no expert. With that in mind, I was worried that I woudn’t enjoy NBA 2K14, but how damn wrong was I! NBA 2K14 replicates the sport superbly, so much so that it’s made me fall back in love with the sport again. It’s so smooth and slick that you can’t help but enjoy the wealth of content that’s on offer.

It’s not a amazingly different to last year’s effort, but that’s not exactly a bad thing when it received so much praise. The addition of the Pro Skill mechanic stands out though, resulting in it being my favourite NBA 2K14 element. Simple yet initiative, you’re given the freedom to do all manner of skill moves with the right stick. I normally hate skill moves, but 2K Sports has made sure that feature is easy enough to use. Whether you’re a newcomer to the series or a NBA 2K veteran, you’ll find that you’ll pick up the basics quite quickly. The phrase ‘easy to use, hard to master’  instantly comes to mind. After many hours of practicing, I found myself causing opposing defenses many problems and setting up star players like LeBron James up for that crucial dunk or well placed 3 pointer on quite a few occasions. I found that almost every play that popped into my head I could replicate on the court, and that’s probably the biggest compliment ever as most sports games struggle to provide such a one-to-one experience. Oh and if you use the skill system in conjunction with the new flash passing ability (think no-look passes and beyond), you’ll be sure to create some amazing plays.

Team styles and player individuality is present too, with top players such as cover star LeBron James and Kobe Bryant standing out from the crowd. Get anywhere near the baseline, let rip with LeBron and you’ll feel oh so comfortable driving in or even taking a three point shot. The shooting system remains largely the same as 2K13, which means you’ll be using the right stick a lot! Accuracy and power take into account player’s stats, but it’s also about how long you hold the stick down and then release it. It’s a system that is pretty much flawless, making you thinking of the power and placement in order to get that perfect basket. The element of risk and reward is very much there (just like the real sport), as if you miss or take too long in your thinking, you’ll be open to quick opposition breaks. I’ve had a few big defeats, but they’ve been all down to my poor play or mistakes. Not once did I feel cheated by the AI. On a core level and beyond, NBA 2K14 is just a complete joy to play.

Path to Greatness is arguably NBA 2K14’s main mode, placing you in the shoes of LeBron James as you aim to give him the status as one of the greatest NBA players of all time. It’s a fun game mode, but whether you win or lose a scenario you still seem to be directed trough the same path. Slight little issue there, but nothing major in the grand scheme of things. There is also a fantastic career mode where you start off as a rookie aiming to be one of the top picks in the NBA draft. Whether you’re playing, doing some continuous training or sitting down with the GM in so you can talk about getting game time, the mode just keeps on giving much like the game itself. Oh and there is online play too.

I went in a relative newcomer and came out an excited fan, that’s the biggest compliment I can pay NBA 2K14. It’s kind of ruined other sports titles for me, setting an incredibly high benchmark for quality. The gameplay is authentic, it looks stunning and most importantly it’s a real joy to play. It’s this already incredible on current-gen, making it both frightening and incredibly exciting to think what 2K Sports can with the series on next-gen. Bring it on, I’m ready for it!