Having taken a year off from the series, EA and Ghost Games have decided to completely reboot the Need for Speed franchise. Many have complained about the NFS games being too similar to each other in the past. Would a fresh approach bring much needed life into the series? Or does Need for Speed stall at the first attempt? 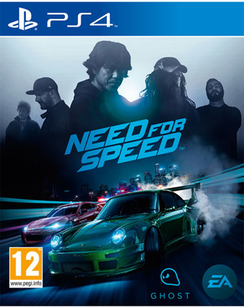 Unfortunately, I have to report that Need for Speed is nothing more than a poor man’s Fast & Furious. Most of the content on offer just feels bland. Firstly, you actually require an internet connection in order for you to play. I understand that concept with MMORPG’s, as that is exactly what they are designed for, but Need for Speed? When you do start the game and have signed in to the servers, you are sent straight into the main story mode. Your main character (represented in First-Person mode) is introduced to a number of key characters in the racing scene of the fictional city, Ventura Bay. Each character represents different races available throughout, such as sprint and drift racing. One of the things I did enjoy about the story was the live-action cut scenes, although a bit too much fist-pumping is going on for my liking! Overall, it is a story that is rather predictable, make your way up in order to be one of the best racers in the circuit.

I must say, Need For Speed visually stands out very well. One disappointment would be that most of the races seem to always occur during the night time, pouring down with rain. Although it is a fictional city, the detail shines through nicely but it would of been nice to see more of the city and race in a day time, sunny environment. As you can expect, the star of the show, the cars look absolutely fantastic in-game. It is the same for the audio. Hearing your car rev up and your engine go through the motions in the race are signs that Ghost Games have really paid attention to how each car sounds in a race.

It is alright looking and sounding good, but gameplay wise, this is where Need for Speed ultimately fails. Each race is missing that unique feel, as well as each car you have in your garage feeling the same when driving. The garage is your ‘hub’ so to speak, a place where you can make your car the beast you want it to be. You are allowed five different cars in your garage, with different parts being unlocked as you level up in the game. You can customize your car to be however you like it, but I managed to complete the story using just the standard car and then adding to it. There are different sliders available to you in garage, allowing you to choose how much or little assistance, grip and steering control you want. The AI of your opponents is a mixed bag for me. More than a few times I found two of my fellow racers randomly hitting each other and sending each other in a spin. I’ll give you a solid tip too when racing. Make sure you have Nitro equipped! Too many times I was first going into the last straight and two or three of my opponents would activate theirs and overtake me.

Even when you are not racing and just cruising through the city, Ghost Games encourage you take on the five elements which include Speed, Style, Build, Crew and Outlaw. Each way to play is pretty self-explanatory, speeding through the city will earn you much more REP with your fellow crew members. Style is about how well you can drift and whilst good, I don’t think the drifting mechanic is quite nailed on with Need for Speed. My favourite was the Outlaw approach. Of course, this is the approach where you are pursued by the cops (something that Need for Speed veterans will definitely know about) and it is about keeping them at bay for as long as you can. If they catch you however, be prepared to pay quite a big fine, money which could be spent upgrading your vehicle for the harder races in the game.

The reboot of Need for Speed is not what I was hoping for. If you compare it to other racing titles on the market, I don’t feel like it offers good value for money. The fact that an Internet Connection is required to play even the single player content is a real let down. There is the ability to play with friends as a crew in the multiplayer component, but for me, races and the overall gameplay became too repetitive far too soon. This was a reboot that many were looking forward to, but unfortunately, Need for Speed doesn’t really come out of second gear.