The Need for Speed franchise screeches its way into the next generation with Rivals, drawing from the series’ previous incarnations and expanding the gameplay with some neat twists and options. Even though it’s a cross-gen title, does it justify the purchase on the latest set of hardware? 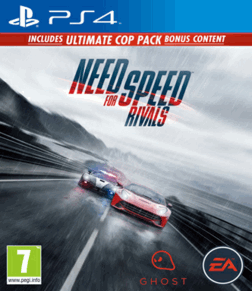 Let’s be honest, the Need for Speed story is paper thin at best. Want to play as a racer? Get away from the cops. Want to play as a cop? Take down the racers. That’s the be all and end all of it really, and the bits in between all of the events just happen to flesh it out a little bit. This is by no means a bad thing, and the sheer overblown audacity of what little story there is as you progress doesn’t feel out of place at all.

Without beating around the bush, Rivals is up there to take the best looking launch title trophy. It looks absolutely superb, the car models being fantastically detailed given everything else that’s going on on-screen, with scrapes and prangs exploding in a shower of sparks. Even though the game runs at 30fps, it still manages to convey a sense of speed that’s not really been present in a number of recent NFS games, with a genuine sense of danger and excitement present throughout all of the events as you hurtle down the freeways and narrow country lanes alike.

Lighting and weather effects are another huge boon in Rivals. Storms creep up on you as you’re ploughing through the pack and the rain streaks off the back windscreen and splatters on to the screen, providing yet more immersion. It all amounts to what can only be described as a stunning visual package, which would only really be helped by doubling the frame rate.

Speaking of the frame rate, it’s my only real complaint about the graphical aspects of the game. Occasionally when playing in 1080p, I noticed a slight juddering with the motion when accelerating. After a little bit of digging, it seems that this is a strange quirk with the engine outputting at 30fps. I’ve yet to confirm this, but it certainly sounds similar to my experiences, and it really was the only downer that I had. Playing on a different TV at 720p couldn’t replicate the issue, so it may just be a limit at playing in 1080p.

If I had to liken the sound of Need for Speed Rivals to anything, it’s akin to being shouted at, directly in the face, for about an hour and a half. There is no mid-way step in this game, it’s either off or completely full on. Engines roar, nitrous ignites, tyres scream and sirens wail. Not forgetting the music that’s somehow crammed in there as well! It’s an impressive cacophony of noise that just highlights the madness that’s going on around you. If I had one criticism, it’s that the noise can sometimes drown out the cops’ radio, but it’s not a game breaker in any way, shape or form.

I’ve always found the NFS franchise to be hit and miss with its gameplay. Since the folks at Criterion took over with 2010’s Hot Pursuit, the series has improved dramatically, taking cues from the Burnout studio’s legacy and infusing the NFS series with the best parts of those games. Fortunately, the folks at Ghost Games appear to have worked closely with Criterion to produce another finely tuned gameplay experience with fantastic handling that never feels overly twitchy or sluggish, but unique enough to each individual vehicle you’re in command of.

The game is split between the Cop and Racer careers, which are filled out with similar events. In fact, the likes of Hot Pursuit are identical events across both, with each role being filled accordingly. The contrasting gameplay is fantastic, and the ability to switch between Cop and Racer careers pretty much on the fly is a nice touch that doesn’t require a ton of menu options to get to. As the events get tougher, you progress to get more exciting and powerful cars on both sides. The Cop career allows you to unlock 3 different style of the same car per level, for Normal, Undercover and Enforcer types. Normal is the typically designed Police car, Undercover is a regular car with lights hidden around the body, and the Enforcer versions are more robust and more durable versions with bull bars on them to help take the Racers down. With the racers side, you’re able to modify your cars so they can withstand more impacts, gain a faster top speed to outrun the cops, or generally look a lot nicer. Hey, it’s a Need for Speed game, it wouldn’t be the same without customization, right?

An interesting mechanic that has been introduced with Rivals, as with a number of next-gen titles, is the “everything is multiplayer” type gameplay. Upon booting into the game, you’re immediately thrown into an online session with a number of other players. The best way I’ve seen this described is that it’s a bit like Journey with cars, in that you essentially play a single player game and occasionally bump into another player in the world. It’s not quite all it was made out to be, and somewhere down the line I hope there’s a much improved version of this system that will allow an almost MMO-esque situation if you choose to join, with tens of racers and cops attempting to take each other down, but as it stands it doesn’t really feel all that exciting just yet. On the whole though, Rivals has a great set of features and enough solid mechanics to make it an enjoyable game.

My major complaint with the gameplay, however, is linked into the multiplayer side. On a number of occasions, I’ve been deep into an event, almost at the end, and the host of the session I was a part of disconnected. With this being an “always connected” experience, it doesn’t have any way of ensuring you can finish the event you’re in. Instead, it yanks you out of it to a black screen and forces you to restart if and when you can connect to a new host. It’s the one black mark against an otherwise great experience, as I missed out on a couple of gold medals thanks to this infuriating bug.

There is an absolute ton of stuff to do with NFS Rivals. From besting all of your friends in mini leaderboards spread throughout the map, to outrunning every officer in the state in a Ferrari, there’s enough stuff to keep you coming back for more. The multiplayer stuff seems to be interesting, but there’s just not enough excitement there quite yet. As usual, trophy hunters will have a whale of a time collecting everything and leveling up all the way to the end, as there’s a multitude of options to take with your career on both cop and racer sides.

Niggles aside, Need for Speed: Rivals is a fantastic game. It looks sensational, and sounds as ridiculous as it looks. It never lets up the pace for a second, with car parts and sparks flying at all angles. Once you’ve got to grips with one car, another one comes along and throws a whole new challenge into the mix to keep things fresh. The game is let down slightly by its clunky handling of online disconnects and a couple of strange frame rate juddering problems, but don’t let this deter you. Rivals really is a superb arcade racer, and it’s got me hungry for a next-gen sequel to one of my favourite games of the last generation, Burnout Paradise.