The Nintendo Wii has never been renowned for its large catalogue of great titles. Cing’s Little King Story on the other hand, despite slipping under most people’s radars, was certainly one of the better titles to hit the system. Roll on a few years and Konami has given the role-playing/city building/strategy game concoction a new lease of life on Sony’s PS Vita. Is this re-imagination the stuff great Kingdoms are built upon? Read on to find out. 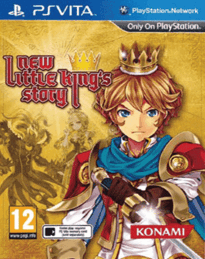 New Little King’s Story kicks off things from where the last game left off. However, as the tutorial kicks in you (the King) has to witness your Kingdom being overrun by monsters who leave your castle in tatters, a bunch of hapless princesses kidnapped and you to rebuild your kingdom anew. Don’t worry if you never played Little Kings Story though, this game can be approached fine from a fresh perspective without feeling like you’re missing out on anything you should know already. In fact, intuitiveness and accessibility is clear to see throughout New Little King’s Story from presentation all the way to the control scheme.

Initially, the visuals are quite pleasing. New Little King’s Story has a slightly less cartoony look to it’s predecessor but despite lacking a little colour, the cutesy look works pretty well. Unfortunately there’s some slow down and frame rate issues when you hit more congested screens which deters from an otherwise smooth, enjoyable experience. There seems little reason why this should be the case, especially with the Vita’s processing power on hand.

Your main duties as King will be to rebuild the dormant sleepy village you’ve inherited in an effort bolster your territory and save the princesses. To do this you’ll be recruiting villagers and training them into a variety of different workers who can dig, fight and build to name a few. This is where the intuitiveness comes to the fore; simply walking up these wandering villagers and issuing a command will enlist them to staunchly follow you. From here another simple button press sends them charging out to do your bidding based on whatever speciality you’ve trained them in. Don’t think simplicity means less depth though because knowing when to send them out, which workers to take with you (there’s an upgradable limit to the amount you can have following you) and when to keep them close all adds a little to the challenge and variety of the gameplay.

The great mix of RPG elements also add to the game’s variety. Hours can be lost finding treasure and loot, then on top of that your workers level up, each of whom have their own individual name meaning you’ll be genuinely aggrieved when one of your favourites gets sent to hospital from your mis-management. There won’t be too many medical issues though as bosses are the only real challenge and once you’ve figured out a particular pattern and begin releasing your soldiers at the correct times, it’s all pretty straight forward.

Gameplay might feel a little repetitive and even grinding at times, however it does mean there’s always plenty to do whether it’s exploring, questing, building or killing bad guys. You’ve got a solid group of advisors around you to help point you in the right direction should it get a little overwhelming. That’s all it is though, a gentle nudge. The game is particularly open-ended sandbox so there’s nothing you really have to do until you want to progress or open up the game further. The advisors reside in your throne room where you can also choose new buildings that train villagers or act as new housing for increasing the population, as well as that the throne room allows you to save your game and sleep to pass to the next day.

There’s a few niggles worth noting; swapping between classes can be a little finicky at times and trying to gather a good amount of each worker type can be slow-going. There’s also the odd occasion when you’ll be looking to progress and the usually clear instruction may have been lost somewhere down the line. This means you’ll be tediously combing each area for a while to figure out what you need to do to move on. Online features vary too; the online battle rankings that allow you to compete against friends is a nice touch but the apothecary store item-mashing diversion doesn’t really encourage much experimentation and is a very take it or leave it affair.

New Little King’s Story does a great job of keeping things fresh from one game day to the next, especially at the initial stages. New players will be pleasantly surprised with the amount to do, whilst fans of the original might be a little underwhelmed with how little the title has progressed and in some cases – especially the visuals – even regressed. Nevertheless, there’s a genuinely fun title here that seems to compliment handheld gaming thanks to some good pick-up-and-play elements and some light-hearted RPG romping. It may not be the best looking game on the Vita, but it’s certainly not a game that would tarnish anyone’s game collection.