Ni No Kuni: Wrath of the White Witch Review

Those who know me and have followed me on NGB know that I love a good JRPG. It’s my favorite gaming genre and that was reflected with my last JRPG review, , which I awarded a brilliant 9.5. This time, Namco Bandai are back but with Level-5 in order to bring another JRPG to these European shores in the form of Ni No Kuni: Wrath of the White Witch. I’ve been hyped up by games in the past but I was desperately hoping for something special with this latest title. Was I left in awe by the brilliance of the game, or was I simply left heart-broken Read the review to find out! 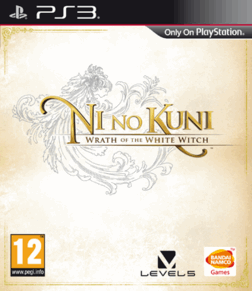 I can’t stress enough how important a story is to the RPG genre and I’m sure fans of the genre will certainly agree with me on that. Let me say now that the story in Ni No Kuni: Wrath of the White Witch is quite possibly the best story I have ever witnessed in this generation. The story follows a young boy named Oliver who lives in a quiet, fun-loving town called Motorville with his mother. There will be no spoilers in this as I’m sure that those who purchase this will want to go through and experience the story themselves and the experience is one to be had, let me assure you of that. Again, without spoiling much, Oliver begins to learn and use magic with the aid of his trusty sidekick, Mr. Drippy, in order to defeat the Dark Djinn, Shadar. Whilst meeting friends along the way and overcoming obstacles, Oliver sets on his quest. The story quite honestly gripped me from start to finish and Level-5 have done a brilliant job in telling such a wonderful story.

The legendary studio Ghibli created the hand-dream animated sequences for Ni No Kuni: The Wrath of the White Witch. The development team talked about how they wanted to push the PlayStation 3 to its limits, both in gameplay and graphics and this game certainly shows what power the PlayStation 3 did and still in fact does have. The game has been wonderfully animated from top to bottom with vibrant, lively looking characters and environments to match.

Whether it’s going through a stunning looking forest, or making your way through a deep, dark volcano, everything is represented with a lovely looking polish. Walking around from town to town and dungeon to dungeon is a pure delight. There are the usual, odd looking enemies and bosses which include a rather fat looking cat, but nothing feels out of place in the game. Graphically superb, it has certainly set the benchmark for JRPG’s in the future, a bright future may I add.

Again, nothing much to fault with the sound of the game. I’d say the best part of the sound is the voice acting, in particular the actor who voiced Mr. Drippy. He comes out with some funny remarks and his welsh accent does stand out in the game but in a great way. There are parts in the game in where I wished I could hear the characters speaking as, for me, there was a bit too much on-screen text. The themed music in game is very settled and relaxing whilst the in-battle music does have a tense feel to it adding to the overall atmosphere of the game.

It’s fair to say that JRPGs tend to follow the same trend in the gameplay department. Walking around, leveling up and battling numerous foes on your way. Ni No Kuni: Wrath of the White Witch is no different from that trend, but shows off that trend in a magical fashion. Leveling up doesn’t seem to feel like a chore anymore. Whilst in battle, you can call upon a familiar. A familiar is a kind of pet in which you can train up and have fight for you in battle. A familiar can also be caught after a battle, a skill learned later in the game and can be caught by one of Oliver’s friends, Esther. These familiars can learn several magic spells and also have tricks. After they have leveled up a to a certain level, different stones (moon,sun etc) can be used in order to morph (evolve if you like) into a more powerful familiar. Although these new familiars start at level 1, they can easily be leveled up and will greatly help you in battle.

Whilst the spells are useful in battle, players will also need magic in order to complete certain puzzles across the game. Throughout the game, Oliver will learn multiple magic spells that help him on his journey. Like most JRPGs, magic is used with magic points (MP) with the more powerful skills requiring more MP. For example, Gateway will be used quite often in order to swap between worlds so that a particular part of the story can be completed. Like other JRPGs, players can set the tactics for the other people in their battle line up so that the others can help you fight or even heal you once you are low on HP. This is very useful in battle because you do need to take quite a strategic approach when battling especially, against the more difficult bosses. The battle system reminds me alot of the one present in Final Fantasy X but with better features added.

When defeating enemies in battle, there are 3 different orbs that will appear that prove very handy. The first orb is green which means if collected, it will raise that player’s health by a small portion although there are larger green orbs that raise the HP more. The second type of orb is a blue orb. This orb will raise the players MP which is very useful when trying to deal out more powerful magic attacks. The third orb is a yellow orb which if obtained, a miracle move can be used. This miracle move is the player’s/familiar’s ‘special’ move and will deal out a huge amount of damage to your enemy, rather than the damage dealt with a normal attack. It has to be advised to seriously look out for these orbs and in particular the yellow one because it will disappear after a while if not obtained.

Going through the game, the difficulty does rise with each town and dungeon but the difference isn’t huge which means trying to level up 6-7 times in one town isn’t very necessary. The game is long enough to allow for gradual leveling up so that you can enjoy the story and also have challenging, yet beatable bosses. Enemies will also drop items that are very useful for in battle such as Raise HP and Raise MP. The great thing about this game is that you can carry as many items and weapons as you like in Oliver’s bottomless bag. This means that you don’t have to drop items in order to gain others which is fantastic and means an item you may not think you need, may come in handy later on. Overall, the gameplay might not be the deepest but Ni No Kuni: Wrath of the White Witch certainly shows that sometimes the simple ways are the best ones.

There are two difficulties that you can play on through the game which are easy and normal. Those who think that easy will be just a walk in the park can think again. On easy, I completed the game in 43 hours. I think 43 hours is a fantastic life-span of going through the story, but that doesn’t include collecting the familiars. There are hundreds of creatures that you can collect as familiars which alone will take hours upon hours. Added on that are also the additional side quests on offer in which general town folk often ask you to complete an errand for them in return for Merit Stamps which can be traded in for items. I have no qualms in saying that this game could take up to 60 hours if all of that I just mentioned was taken on. For those wondering if it would be worth playing through again on normal, I can say that I am currently doing that and enjoying it just as much.