Odin Sphere Leifthrasir is a remake of the well received PlayStation 2 classic with many new enhancements and features to be had. Question is, how can it go wrong?… 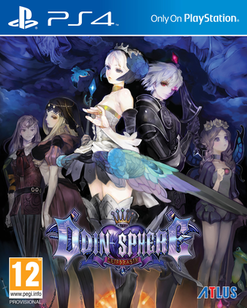 Putting it bluntly it cannot. Odin Sphere Leifthrasir is a recreation of a classic (one that I hold in high regard) and touches on absolutely everything that was right with the original and expands it to give it such an amazing gaming experience for me. It also comes with the added bonus of being able to play it as the PlayStation 2 classic if you so wish and what I also did; this doesn’t effect the story in any way so feel free to play it on whichever mode you desire.

The game comes with a huge host of new enhancements such as abilities; items; enemies and an item storage and a restaurant (well your character has to eat too right?). General noticeable improvements are the smoother graphics and more fluid controls. This is due to the DualShock 4 allowing better control over the use of abilities. The general UI is cleaner and more polished and the game runs at a perfect 60fps. The sight of lady birds running among the leaves and stars shooting in the sky are more noticable and the way that foliage and rocks blend in the foreground just looks amazing. In short the game looks gorgeous and runs perfectly.

The story takes place during the Caluldron War; Conflict between Ragnanival and Ringford are underway and Odin, the demon lord of Ragnanival seeks the Cauldron that can conjure Psypher crystals and has invaded the fairy realm known as Ringford to do so. The game itself is told by a series of events played out by reading books in a library in an attic by a girl named Alice. Each book is the story of each protagonist which there are 5 in total. The game progressively unfolds and as it does you will pair characters by following clues in the story and to avoid a bad ending the choices you make are important.

Each character has there own sets of skills that are acquired through beating bosses or found in treasure chests. The skill animations are beautiful and never slow the game down even if there is a mass amount of enemies on screen. One small issue I had with the game on PlayStation 2 was there was a noticeable drop in speed during hectic fights but now that has all disappeared. It is an absolute joy now to play with no slow down. Each character is unique for example Gwendolyn is fast and agile and can double jump and glide. Velvet uses a whip as her weapon and can swing around the map chaining attacks together to pummel her foes.

The game progresses through battle stages with enemies to fight with two or more bosses to beat which will earn players a score which is given at the end of a stage. Extra points are given when certain requirements are met for example not taking damage and taking less time to complete a scenario. Higher scores give a better return on Items and Gold received so it is welcoming however there is no harm in taking less of a reward in favour of having a more freelance approach.

Two mechanics to grasp within this adventure are Cooking and Alchemy. When foes are vanquished they leave behind orbs of energy known as Phozons. This energy can be absorbed and then used to accelerate the growth of seeds which can be planted and then harvested then eaten for an XP boost; however finding recepies to cook food is more worthwhile and after a couple of chapters in it is definitely worth the time to cook some cuisine to notice the increased benefits. Phozons can also be used to increase the characters skills to increase it’s power aswell as enhance the power of acquired skills. Alchemy like cooking allows characters to attempt creations at will or by using recepies found in the game to create an assortment of potions and consumable concotions. The only drawback to this system is that it can feel tedious after some time however it is a very minor one at that and it is definitely something that should not be overlooked early on.

While the game is almost identical to it’s original the increased visuals allow for a more immersive experience and I found myself feeling the characters emotions this time around compared to the original. They have also added in the Japanese voices if you so wish to hear them over English subtitles however the English voice-overs were never terrible so why would you want to?

The beautiful ethereal melodies heard in this game really set the tone and are just beautiful and majestic. Many times I have just wanted to sit through the title screen for ages and listen to it however after a while it cuts out but what you do get instead is a beautiful short showing the games beauty along with the cast of characters from the game.

Although I managed to find one small fault although minor and something which in effect would have taken something from the game if it was removed there is absolutely nothing that I can say bad about this game. It is a 2D fantasy action role playing game that will take you around 40 hours to complete. If that isn’t worth it then there is replayability in the New Game Plus and the option of harder difficulties whilst keeping all of your previously obtained abilities and loot. I applaud Vanillaware on what is possibly their greatest achievment in porting this game to the PS4 so flawlessly. If you have never played Odin Sphere prior then now is a perfect time to start. Even if you played it previously, it is a perfect time to relive one of the greatest gaming adventures ever.