I’ve got to admit, I could write about what I know about the One Piece franchise on one hand, but doing some research made me realise how big and popular it actually is. Getting my hands on One Piece: Pirate Warriors 2 was for me heading into the unknown, but it was a state that I was looking forward to. Did One Piece: Pirate Warriors 2 make me want to enter the One Piece world more and more? Read the full review below to find out. 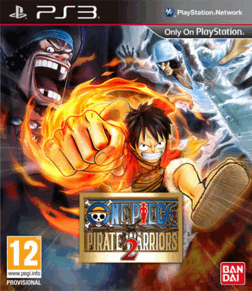 I’ve played some games in my time, with stories ranging from all kind of backgrounds, but I have got to say that One Piece: Pirate Warriors 2 must be the most craziest game I have come across. One Piece: Pirate Warriors 2 sees the return of the popular Straw Hat Pirates who are run by the game’s main protagonist, Luffy. Luffy and his gang come across a certain strange dial which affects most of the crew and turn them against one another. However, Luffy and his crew member Nami get captured by one of the turned Straw Hat Pirates. In an adventure where Luffy and Nami must regroup the Straw Hat Pirates whilst fighting off other crews such as the Marines, this has to be one of the craziest stories I have come across. Is that a bad thing? Not necessarily and I am sure that If i wondered more into the One Piece world, the story would grip me more. I did find it fun however, which was the main thing.

I had mixed emotions for the visuals of One Piece: Pirate Warriors. In one hand, the graphics captured the anime feeling quite fantastically with the cut scenes and detail in the vast amount of characters you can get to grips too, as well as the battle ground and enemies. On the other hand, the characters, some of them anyway, looked rather weird to say the least, although did have a unique look against them, I must admit.

There wasn’t just that natural feeling attached to it, it all looked too far-fetched for me and whilst there are plenty of people that will enjoy that sort of thing, I just didn’t feel like I could appreciate the visuals as much as I wanted to in One Piece: Pirate Warriors 2.

Again, much like I reported in the visuals side of the game, there weren’t much to shout about really. The overall tone of the music in the game seemed to have a generic rock feeling attached to it with the tempo gradually increasing as you get into battle with hordes of enemies. The voice acting, well I can’t really judge that as it was the voices were all in Japanese with english subtitles. I didn’t really like that as it made me understand the story and the emotion of the characters less. It would of been nice to have full english voice actors do the voice overs but unfortunately, that wasn’t to be.

First and foremost, if you like the idea of a game that uses quite simple hack and slash mechanics, fighting against hundreds of enemies…there’s a good chance that you will fall in love with One Piece: Pirate Warriors 2. I love hack n slash titles as much as the next gamer but unfortunately, the flame between me and the game failed to keep burning for more than a couple of hours.  The reason’s are simple, the game just doesn’t have any rewarding feature attached to it. I feel like even a small child could accomplish just as much as I did in the game simply by button mashing as that’s all you have to do in One Piece: Pirate Warriors 2.

X and the Square Buttons are your best friends and whilst there are combos you can master in the game, the face paced action of the game means that you won’t really care to bother with timed attacks. The O button is also another one of your friends which sets off your character’s Special Attack. This special attack can only be used as you fight your way through and the special attack gauge is filled. Not to worry though, as it doesn’t really take that long to fill up the gauge and the special attacks are very useful when taking out the larger, boss type enemies throughout the game.  It can get a bit tiring slashing through hundreds of enemies which is why Style Action mode comes into great affect. Again, this can only be filled by the corresponding gauge meter getting filled up (Again, will fill up automatically during battle). This turns the player into a much powerful force allowing you to rip apart many enemies at one time.

It all sounds enjoyable right, and Yes it is but I just found that it got tiring a little bit too quick for me. For those who get stuck in the game, hints will pop up throughout in order to remind you of some of the abilities you will have at hands and It was a nice reminder although I can’t say I used much of it much. There are RPG elements attached to it as you can level up all the characters, collecting coins in battles in order to improve your life, defense and attack. Playing through easy mode, I didn’t feel I needed much help but I can see that going through the more difficulties, this option would become more mandatory in order to get through the more latter stages of the game.

Although the main story of the game doesn’t take much more than a few hours but there are over 20 characters you can progress and level up so those who love to play through with each character will find this gripping, enjoyable and will last you more than the average title. There is also an online mode where you can work together in certain levels, adding up to the playing time.

One Piece: Pirate Warriors 2 has some geniunely enjoyable moments, but not enough for me to warrant it giving it a higher score than I have below. Whilst it does do the simple things right, there isn’t enough game to keep you coming back for more. Fans of the anime may fall in love with the style and feeling, but for everyone else it’s essentially Dynasty Warriors with a different skin.