Deep inside all of us lies an innate criminal mastermind, a darker side that would love nothing more than to come out and play. By play I mean carrying out the ultimate heists that some can only dream of. Thankfully PayDay 2: Crimewave Edition brings about the perfect opportunity to unleash it. Can you climb through the ranks to become the ultimate criminal mastermind? Read on to find out! 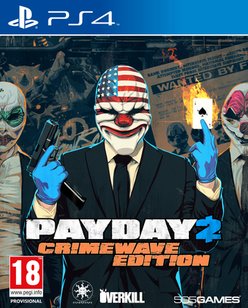 The Wolfpack is back in town! As a remaster of PAYDAY 2, a first person shooter available previously on PS3, Xbox 360 and PC the original gang is back along with a few new faces, or should I say masks? You will find no story plot here for your future is yours to seize and claim the ultimate PAYDAY through a series of heists or throw it away in the slammer. Players returning from the PC version may not find much new here, however previous console owners will find a dissimilar experience, with new characters, including the first and only female Clover and all previous DLC included, which is also great for newcomers to the series.

As you might expect from an action packed adventure, the soundtrack, whilst limited includes techno beats and some hefty drum n’ bass which keeps you uplifted and in rhythm with the action. If the generic playlist doesn’t strike a chord with you there is also the option to set up a custom list of your favourite PAYDAY tracks to help you get in the mood for your perfect heist. The graphics have been given a boost to 1080p and whilst some textures up close appear sketchy, surprisingly it’s a great looking game. Sadly you may be a little too preoccupied to take in the surrounding environments which may not be the most demanding but there is an impressive amount of detail there. Lighting can however be an issue where some maps are at times too dark which makes life just that little bit harder. PC players may not find the updated graphics any different but it is a welcome upgrade for console owners. Another disappointment may come to some as the remaster only offers up 30fps. Some moments may appear a little jittery but with the onslaught of the law hot on your case you are often too engaged to notice any real effect. On a more positive note, a nice touch is added with the inclusion of live action video, with heist scenes re-enacted throughout the opening and on contract mission screens, which act as a form of briefing and backstory.

PAYDAY 2: Crimewave Edition is all about one thing, pulling off the ultimate heist. Whilst games such as Grand Theft Auto Online touch this topic, nothing else can offer you such a high level of entertainment. CRIME.NET is where you will access a plethora of contracts to help you on your way to becoming a master criminal. Now it is important to note that this is primarily an online co-operative experience to enjoy with a group of friends or the mass community of fellow heisters. Should you decide that you want to go it a lone wolf, CRIME.NET can be accessed offline where you will be joined by a team of A.I characters. You will find yourself in for a tough ride here as unfortunately they are just plain useless other than drawing off some of the heat from the law or coming to your rescue. In fact it is quite the headache. All objectives will have to be carried out by you alone, which amongst all the commotion can prove to be quite the juggling act and may often result in repeat failures unless you are well equipped for the challenge. This often leads to utter frustration and is not a pleasant experience. It boggles the mind why some simple commands could not be included that would be beneficial in some way to allow a better solo experience for those inclined.

There are a wide variety of contracts that deem your unique skills necessary, from simple jewellery store robberies, complex bank and train heists, trashing a mall and cooking up crystal meth. Contracts range in difficulty which is indicated by yellow skulls. The higher the risk, the greater the reward but even the simplest of heists can go wrong with the smallest mistake. Controls can be fiddly. Accidentally pressing the wrong button could set lose a grenade or gunshot that alerts the law or kills an innocent civilian, whilst firing aim is shaky and unclear making it sometimes difficult to aim a good shot, especially whilst laying on the floor injured. What does make the gameplay great is that there is no way set in stone for how the contracts can be completed. You can go in all guns blazing through the front door or take a more stealthy approach for a bonus reward. That said, completing any contract by stealth is virtually impossible without the right gear which will take large sums to acquire. However, try as you may things will inevitably get crazy. Now an important part of any heist is having the right tools for the job and finding the most efficient way to get the job done as quickly as possible. Card keys can be located to unlock doors, or you can go with a bang and blow doors off their hinges with some C4. Perhaps the most loved tool of all is the trusty drill, perfect for cracking open those vaults and safes. What more could leave you feeling all warm and fuzzy inside than a nice thermal drill? Now if you couldn’t detect the sarcasm you will soon learn. Drills are the bane of existence! Now in a realistic setting I’m sure safes take a while to crack (not that I would know) but here you will have to wait a full 360 seconds for a drill to break through, that is of course if it doesn’t jam (which they do, frequently). With the droves of heat that pile on you in constant waves, raising in intensity from small time cops to SWAT teams and FBI, 6 minutes is an excruciatingly long time especially when you have to constantly restart them. This provides many long bouts of anxiety, a recurring feeling throughout, then again you could say this makes the game feel quite realistic in a sense.

Many heists will get your adrenaline pumping as you hope to remain undetained and reach completion, known as PAYDAY. Good teamwork is paramount to a successful heist regardless of difficulty. Online co-op is by far the best experience for PayDay 2 and I can honestly say it’s one of the most exhilarating I have played yet. A balanced team, good tactics and a well calculated plan is the key to success. Some contracts can span up to 7 days, which is one commitment you don’t want to go wrong. Some contracts provide a planning phase where you can, for example buy help from an inside informant to help things go more smoothly. Working as a team makes all the difference, and if you plan and execute tasks efficiently it makes life easier for all of you. It is always best to have someones back than go off alone as one mistake can mean failure for all. When you have invested so much time into a heist (you will easily lose track of time) failure is devastating. If done right however the sense of accomplishment is thrilling! 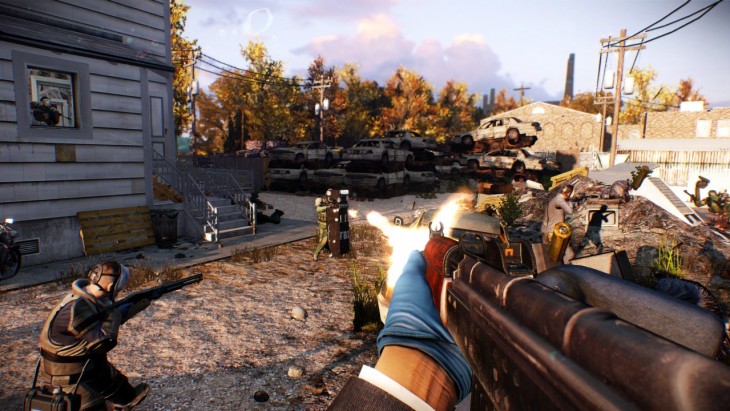 There’s alot of time that can be put into building up the ultimate heist team. There is a plethora of customisation options available, from weapons such as assault rifles and pointed toothbrushes to armour. PAYDAY includes a reward system that allows you to pick a random card to earn rewards such as additional, EXP, cash bonuses and weapon mods. Characters can equip and customise various masks that can be unlocked or earned as you rise in infamy. There are a variety of character classes, from technicians to ghosts and can be further specialised through the in depth skill trees and perk system. This all allows you to craft a character suited to your preferred style and they are important to keep in mind for a balanced heist team. This can take quite alot of cash, which means you will want to complete as many heists as possible and grab all the extra loot and hidden packages you can. It’s all or nothing right?

PayDay 2: Crimewave Edition will have you in for the long haul. Whilst contracts can be repeated and may seem repetitive, they will never quite be the same. Maps are randomised so nothing appears again in the same place. As much as you plan a map and think you have it down, you will constantly have to switch it up and adjust for each new attempt which keeps you on edge every time. Whilst solo play is uninviting, online co-op is intoxicating and with the promise of future updates it will have you coming back for more!