Released in Japan last year and then followed by a US release shortly after, many wondered when Persona 4 Arena would get released over here in Europe. Thanks to Zen United, their wishes were answered. With many fighting games already gracing our beloved consoles can Persona 4 Arena make a lasting impression? Read on to find out. 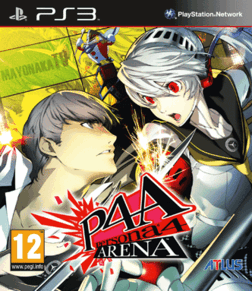 Story, it’s not a term that you’d usually associate the fighting. For example, with Street Fighter x Tekken there was hardly any story present at all. Turning Persona 4 Arena on for the first time on my PlayStation 3 and seeing ‘Story Mode’ in the title screen didn’t exactly fill me with optimism, but boy I was in for a big surprise. The story mode in Persona 4 Arena is what every fighting title aspire to in the future. It actually has a place in the game instead of making it look little more than a 10 minute stop gap between arcade mode and online play. There may be players out there who have never played a Persona title and therefore might bypass this, but Persona 4 Arena does a fantastic job in explaining the story in detail so you can get up to speed on what happened in the previous title.

The story focuses on members of the investigation team who, after solving murder mysteries related to it the year before, learn that the midnight channel is back again. The difference this time is that there are no murders as the midnight channel shows off a Fighting Grand Prix through members of the team. The investigation team decide to jump in the TV to the midnight channel once again to explore this new mystery with the help of their Personas. The story for each character can last up to a couple of hours, mainly due to the amount of dialogue that helps you understand the back story of each person. After going through the story mode, I was left a very happy camper. It’s about time fighting game had an engrossing story attached to it, and Persona 4 Arena delivers.

Persona 4 Arena’s anime style visuals are decent to say the least, and going through the story mode it was nice to see how much detail the development team put into each characters in the game, focusing on giving them their own unique look. The locations in the are also a nicely displayed, but never take much of the focus off the battle that is taking place.

One of the main highlights for me was the introduction of the P1 Grand Prix in the story mode as I thought it was represented superbly, with fantastic character models and use of vibrant colours. Having a visual commentary throughout battles is also a nice touch. On the whole, the visuals certainly match up to those of other fighting games and do a fantastic job in showing off the unique style of the Persona universe.

If you’ve ever played a fighting game before, you’ll know exactly what to expect when it comes to Persona 4 Arena. With jazzy, arcade style music sounding off in the background, it’s all very familiar. However, I was pleasantly surprised with the voice acting. It made the story very believable and hearing the amusing character references in the Grand Prix such as ‘The sister complex kingpin of steel’ added a nice humourous touch to proceedings.

Without a doubt, Persona 4 Arena’s main objective is to appeal to those who love the 2D fighting genre. Thanks to the easy to learn but somewhat hard to master move sets and a decent roster, Atlus and Arc System Works have certainly met that objective with flying colours. The battles throughout the game have a fun, arcade style feel to them that keeps you coming back to more. Whilst other titles in the genre have the ‘button bashing’ tag attached to them, Persona 4 Arena attempts to step away with a very helpful Lesson mode.

In Lesson mode you are taught everything from scratch, so if you’ve ventured into the game for the first time you’ll get to learn (depending on your skill level) at least the basics. The move sets, for me anyway, felt much easier to learn than the likes of Tekken. This meant I could go into my battles with a tactic rather than hitting the buttons at a stupid speed to try and make my characters perform something decent rather than a simple kick or a punch. It’s a massive plus that almost anyone can step in and enjoy what Persona 4 Arena has to offer due to its inviting nature. For someone like me to pull off multiple combo attacks on my opponent without spending hours and hours practicing says it all really. Instant death attacks were a personal favorite of mine. Armed with my Persona, raring to go, I felt like I could take on the world with just the pad and my fingers. Well, the Persona 4 Arena roster at least!

Burst mode is also very handy as it gives you access to a more varied attacks using the Personas, but you have to make sure your gauge is full before you can take advantage. Of course, the Personas will not always there for you to call upon, as if your Persona is attacked too often the Persona gauge will deplete and you’ll be forced to use your normal character in battle. It’s adds a nice little tactical element to battles as you’re not able to depend on the stronger attacks offered by a Persona.

If you’re anything like me then fighting games probably get stranded on your shelf after a few days and rarely get played again. However, Persona 4 Arena might just alter that tend somewhat, mainly thanks to the fantastic story mode. Although the story for each character revolves around essentially the same thing, I found that I actually wanted to go through each character’s story to learn more about that particular person and understand of the overall story. If you listen and read all the dialogue, each character’s story can take about two hours to complete. There are only three stories to choose from at first, but rest assured more get unlocked along the way. Add that to online play and a traditional versus mode, if it grabs your attention then Persona 4 Arena will keep you occupied for more than an extended period of time.