Can you imagine a world where Sackboy takes on Nathan Drake? Or perhaps even crazier, Sly Cooper locking horns with Raiden from the Metal Gear Solid series. If you’re reading this and laughing to yourself thinking I’ve gone crazy then you’re probably right but in PlayStation All-Stars Battle Royale, these kind of duels become a reality. Sony, SuperBot Entertainment and Bluepoint Games have come out giving us the best characters from the PlayStation era to fight out in an all out brawl. Does shooting Sackboy in the head with a rife really bring an instant charm? Or does this game just mock some of the great gaming characters we have all got to know and love? Read the review to find out! 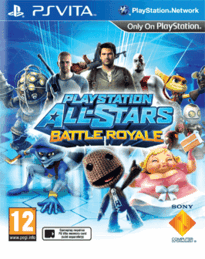 You may remember me stating back in my Street Fighter x Tekken review that the story was the most disappointing aspect of the title and it pains me to say that again, the story is lacking here to. I’ve said again and again that all out fighting games seem to never grasp the idea of a good story and with this, it tends to follow the tradition. The main story is through the game’s Arcade mode and players choose one of the characters in order to start the journey.

I firstly choose Nathan Drake and the scene at the beginning (more like a still image) showed Nathan Drake on the hunt for some treasure just like you see in the Uncharted titles. Players will then go through 6 battles which last 3 minutes each before they reach the boss stage. The boss stage sees an evil force trying to stop players from reaching their goal, and also brings along a few of the other roster characters in order to stop you. Again, going through the Arcade mode again with other characters follows the same trend of them following the same story you saw them trying to achieve in their own titles. The story mode is very bland and was really disappointing, but I get the feeling that the developers didn’t really have the Story mode in their focus when creating this game.

Looking at the graphical side, the team did a marvellous job in creating the visuals for PlayStation All-Stars Battle Royale, and even though I haven’t tested the PlayStation 3 version, the PlayStation Vita version certainly is stunning and really looks as sharp as you’d expect on a home console such as the PlayStation 3.

The character modes also look very detailed and look just as they do in their own games which shows the attention to detail here is great. As I was going through the Story mode, one of the great things I noticed about the game is the arenas in which you have your battles in. These arenas are made from iconic locations from the games that the characters come from. For instance, the iconic part when Nathan Drake is in the airplane and the crates are crashing down is perfectly replicated in the game as the arena while your are battling it out against your enemies.

Seeing iconic levels from the great games surrounding the roster including greats like God of War is really pleasing on the eye. Other ones include locations from Jak and Daxter, Killzone and LocoRoco. There are 14 fantastic arenas in all which are all fantastically recreated.

Going on the sound in the game, it must be said that it is decent. The development team have done a great job in getting the voice actors in for the game to do some dialogue for their characters. As you start Arcade Mode with Sackboy for instance, it’s great to hear the awesome tones of Stephen Fry. The overall sound in the game certainly has an ‘arcadey’ feel to it but certainly has its place in the game.  Not a glorious masterpiece sound wise, but the background music whilst in battle certainly does keep the game fresh and constant.

Whilst PlayStation All-Stars Battle Royale is not the most in-depth when it comes to its gameplay, the fun factor is certainly there and makes it an overall excellent game for the casual gamer. This is, in my opinion, mostly down to the excellent and easy control scheme that the development team built in. Attacks are placed with the simple use of the Square, Triangle and Circle buttons in the game. Each button also has multiple attacks by pressing the analogue stick in different directions.

The attacks are also unique to the characters. For example, when controlling Nathan Drake, you will see him bring out his shot gun or also bring out a ‘Uncharted’ style cover in order to keep himself away from danger. Again, another example is Jak in which he will use his iconic gun to defeat objects. Whether it be Raiden with his sword slicing skills or Sackboy with his object using dominance, there are plenty of move sets in the game that will keep fans happy for a while. That’s not the only form of attack mind, as there are also Super Attacks.

These are the character’s finishing moves and deal more damage than normal attacks. These Super Attacks come in three different stages with each stage offering more amount of damage to your opponents than the last. These attacks are built up by filling up your characters AP meter which is filled by constant basic attacks. The one thing that really annoyed me was the lack of the health bar. This meant that your enemies and you were near immortal. The only thing that would end the battle is by using a Super Attack and it hitting all your enemies at once. There are up to 4 players at once in one battle so it can be hard to hit your Super Attack on all three at once.

If you don’t hit your Super Attack on all three, you have to ‘kill’ your foes by hitting a Super Attack on them which evaporates them and then brings them back. The winner is decided at the end of the round by who has the best kills/deaths ratio, a bit like the Call of Duty system. Whilst fighting, there are also Items and Hazards available which can be turned on or off in a normal versus game. Items are there to help your character and include items such as Twisted Metal’s Freeze Missile  or the trusty RPG -7 from Uncharted. Hazards are there to cause a distraction and also cause damage to you but rarely does it make a difference.

Arcade mode normally lasts around 20 minutes which doesn’t seem to long at all but there are 20 characters in the roster which certainly makes it last a few hours although fighting through the same stages time and time again does get frustrating. Luckily, there is an online mode in which players can play through Tournaments which are set through Seasons which can become great fun, or just to battle through with your friends when bored. With added challenges in the game and a trophy list to obtain, the game will certainly last for a while.

Seeing the likes of Jak, Sly Cooper, Fat Princess, and Cole all in one game is a great experience as each character certainly has their unique features. Whilst not the most in-depth fighter out in the market, PlayStation All-Stars Battle Royale does a great job in keeping the casual gamer happy. With an easy control system, more characters through DLC and a first class roster to match, PlayStation All-Stars Battle Royale should be the game you look for in your Stocking this Christmas!