The Larger than Life Lombax is back… 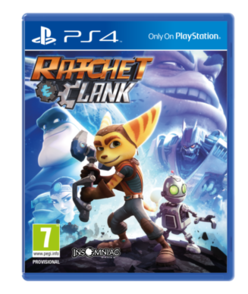 I want to get this out of the way for those who aren’t sure whether this is a complete reboot or a progression of the series. Ratchet and Clank is a “re-imagined” version of the PlayStation 2 classic with different elements of gameplay throughout the whole series added into it, resulting in this gem coming to the PlayStation 4. For those who aren’t familiar with the series, Ratchet and Clank follows an anthropomorphic Lombax named Ratchet who meets a pretty beaten up robot named Clank on his home planet. Clank finds out that villainous Chairman Drek plans to create a new planet for his Blarg race to inhabit while destroying every other planet. Ratchet finds himself unworthy of being a galactic ranger, deciding to help Clank find help from the superhero Captain Qwark.

From the initial opening cutscene you almost forget you are playing a game and instead watching a Pixar movie, greeted by some joyful CGI. While the step up in graphics from the PS3 games is less noticeable than the PS2, it most definitely shows the max potential of what the PlayStation 4 can do and visually, this is stunning to say the least. After the opening cutscene you will find yourself in control of Ratchet and immediately the controls feel slick; and as you progress through some simple training stages you will find yourself accustomed to the controls instantly. This does not generally mean you will get used to the game as quick because I have to say this game is difficult. There are 3 difficulties and whilst I played it on Normal (Casual and Hard being the other 2 settings), I really found it a test with some fights. If you have not played Ratchet and Clank before it may be worth trying the Casual difficulty but this all comes down to experience especially with platform games.

As you begin your adventure, you are equipped with a wrench which is basically your everything-to-do tool. Not only is it used for beating enemies to a pulp, Ratchet can twist bolts on platforms which trigger them to move; derail moving trains and smashing open the many boxes stacked up around the planets he visits. Inside you’ll find ammunition and most importantly bolts which are a currency in the game which can be used to purchase new weapons at the Gadgetron Vendor and can also be used to replenish health and ammo at the same place. This is very helpful as the cost isn’t too high and most of the time ammunition is usually always low for the weapon you use the most or isn’t always nearby.

Throughout the game Ratchet will also obtain Gadgets; these are all self explanatory and will make Ratchet better and overcome previously difficult obstacles. The Helipack gives Ratchet a boosted jump while the Hydropack allows Ratchet to swim at great speed whilst underwater. Raritanium is another currency that can be obtained, however, this is a lot more scarce than the aforementioned bolts. This is used to upgrade the many arsenal of weapons in Ratchets inventory such as the Rate of Fire and how many bolts enemies drop when defeated with a certain weapon. Weapons themselves increase in level the more you use them which increase their effectiveness overall. Ratchet himself will gain strength as he progresses; gaining more health. For me this didn’t make too much of a difference in terms of difficulty as these increases seemed to happen as enemy encounters did too. While you may find yourself with more health, enemies will also become stronger so always make sure you have your wits about you. Failing to counter an enemies attacks will render you useless. Ratchet has a limited amount of oxygen so underwater areas must be navigated quickly; once your oxygen is depleted that is it; there is no health deterioration.

So…about the weapons; any Ratchet and Clank fan will be familiar with how crazy some of the weapons are. Well, all of that craziness is back with some new ones added into the fray such as the Pixeliser which digitises enemies into a low pixel resolution. The Groovitron is back and better than before; I got it just before a fight with some normal henchman of Drek and as I threw the Disco ball down a giant Tank came from nowhere and started dancing! An an incredible moment, I must say!

There are many collectibles in the game with the most obvious one being a Card Collection. These cards are obtained through defeating enemies or looking in certain and each card is part of a set. Complete the set and you will gain a bonus e.g. completing the set for the Omniwrench increases its damage by 100%. Every 5 Duplicate cards can also be traded in.

Gold bolts can be found but these are rare and usually obstructed, usually in a hard to reach place or somewhere not too obvious. Collecting these opens up the Extras Menu which allows you to change the In-game screen filter; access Image Galleries; activate Cheats and even change Ratchet’s appearance. This does not seem crucial to the completion of the game so unless you really have the urge to try out different settings and cheats, you may find yourself keeping away from that extras menu.

A lot of the time you will mostly be playing as Ratchet although there are times where you will be playing as Clank who traverses smaller pathways and interacts with the gadget bots. This is a great way that the game paces itself and gives it a unique, fresh feeling. The game is told in a narrative view from Commander Qwark and due to this the game is told at a faster pace than the original and includes scenes from the upcoming film itself, which is out later this month.

Ratchet and Clank is a beautiful and entertaining adventure to warm even the coldest of hearts. Whether you’re a casual or hardcore gamer, child or adult; this game appeals to all; it is witty and full of harmless pokes at culture, even at the expense of other video games! If you have never played Ratchet and Clank then this is a great game to start out with. As platform games go it is sometimes difficult to come up with something that feels fresh but this game does exactly that and more with its amazing graphics, great sound and story.

Great review. Really looking forward for the game to come out. Been too long since I’ve played a gem like this.

I genuinely can not believe it’s been 14 years since I the original game was released. I never got a chance to play the PS3 versions, so Quest for Booty was by far my favorite an its good to see from your game play that it is up to the… Read more »