Insomniac’s dynamic duo bid farewell to the PlayStation 3 with a budget title designed to close out the “Future” series. With Nexus retailing for £20 or less, is it worth giving this extended epilogue a try? 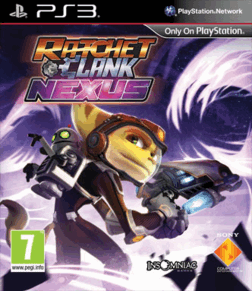 As noted above, Nexus is really an epilogue to the “Ratchet & Clank: Future” series that’s graced the PS3 over the past few years. The game starts as our two heroes are escorting a pair of criminals, Vendra and Neftin Prog, to a detention centre, who then break free and start causing chaos. They then get their hands on a device that breaks down the walls between dimensions and casts a shadow over the future of the universe, with Vendra’s thirst for power being at the forefront of the threat.

The lower price of the game is reflected in its length. Nexus is not a particularly long game by any stretch, but it is very enjoyable thanks to the series’ typical risqué sense of humour and tight scripting. The story zips along nicely and never feels like it’s dragging, although it’s not a very deep tale that’s being told. Ultimately this doesn’t matter too much though, as in spite of its length, Nexus is a very polished Ratchet & Clank game.

As with a number of games hitting the tail end of this generation, Nexus looks very nice. The Ratchet & Clank games have always had a certain feel to them, and Nexus expands on this with an array of vibrant environments, impressive enemies and bonkers weapon effects. The framerate holds up extremely well, only stuttering slightly once or twice during the extremely hectic last half an hour or so of the game. The explosions of nuts & bolts when an enemy is vanquished continue to be impressive, especially when you manage to chain together multiple kills in a row to leave an area covered in glowing bits and pieces.

Insomniac have clearly taken some inspiration from their Resistance series when it comes to some of the new enemy types in the game, with the Nether enemies certainly having some similar qualities to the invading Chimeran hordes from the FPS trilogy. Even if this is unintentional, it works really well, with the more cartoon-like enemies fitting well into the Ratchet & Clank Universe.

There’s not much to grumble about with Nexus’ sound choices really. Some fantastic sounding weaponry is the only major standout, the rest seeming to be a little by the numbers. Not that this is a bad thing, as Insomniac have clearly shown with previous games in the series that they’re capable of impressive sound design regardless of the scale and scope of the game. The only real complaint I had with the sound is that they could’ve done a bit more with the voice acting outside the main cast. The number of times I heard “Oi, he hit me with an omni-wrench!” within the first couple of hours alone was enough to drive me to taking a break for a while.

If you’ve played a Ratchet & Clank game before, you’re in for more of the same with Nexus. Movement and camera control is tight, the combat is as good as it needs to be, and platforming feels natural. There are a couple of steep difficulty curves, but you never feel cheated when you become overwhelmed, and are usually able to create a slightly different strategy to attack with when you restart.

The vast majority of the game is played with Ratchet, although Clank has his fair share of things to do as well. Early on in the game, you get an upgrade to detect dimensional rifts within the environment. Once one is found, Clank jumps in and you’re faced with a silhouetted 2D platform level. In these levels, you can move around as normal with the left stick, but also control gravity with the left stick. It’s a mechanic that works really well, and threw me back to the days of Pixeljunk Eden, and the mad rush to adjust yourself mid-air. It works really well, and I’d have to say these were some of the parts I enjoyed the most within the game. They’re just challenging enough without being frustrating, and add an element to gameplay that I wasn’t expecting but thoroughly enjoyed.

Back in the 3D space, and Ratchet’s arsenal has been upgraded. Alongside some of the long time favourite weapons such as the omni-wrench and the fusion grenade, there are a huge number of new toys to take the fight to your foes. My personal favourite was the Temporal Repulsor, which throws enemies up and after upgrading, it becomes a very powerful tool that puts enemies in a temporary state of suspended animation, allowing you to deal a swift blow with the omni-wrench.

As mentioned, the main game is very short. I managed to complete it in three small sittings, and I’d put my time spent with it on around 6 or 7 hours. There are a few challenges to partake in throughout the story, and of course, there’s plenty of collectibles to find.

Once the game’s been finished, the option to play in “Challenge Mode” appears. This is a version of the game which has its difficulty ramped right up, and is a real test for those who want to prove themselves (or pick up that platinum trophy). With no multiplayer to speak of, once you’ve finished this, then there’s not going to be a whole lot to do.

Ratchet & Clank: Nexus is an impressive farewell to the PlayStation 3 from the folks at Insomniac. With some neat gameplay twists and interesting enemy designs, it’s a platformer that’s worth playing. Yes, it might be short, but when the game is launching at the price that it is, it’s hard not to recommend it to people, even if they’ve never played with the Lombax and the robot before.