Will you remember Nilin and the Neo-Paris world that exists within Remember Me, or is this new IP instantly forgettable? Read on to find out. 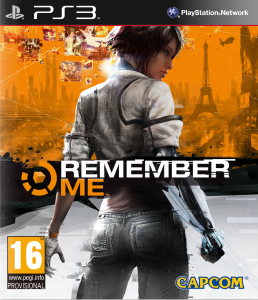 Set in Neo-Paris in 2084, Remember Me sees you take control of Nilin, a former elite memory hunter who has the ability to break into people’s minds to alter or even steal their memories. Due to what Nilin knows and what she is capable of, the authorities within Neo-Paris capture her and wipe her memory clean. Once she has breaks free, she sets out to find out exactly what happened and to find and recover exactly who she really is. The further you progress through the games story, the more Nilin will remember about her previous existence and the more she will remember before being imprisoned.

It’s an interesting premise, stealing people’s memories and playing with them, and (for the most part) is executed very well throughout the game. Quite a bit of information is thrown at you during the opening stages, making it somewhat difficult to digest everything, but once you get through that the pacing of the tale is balanced well until the credits roll. Whilst she isn’t the most loveable character ever, Nilin’s involvement definitely adds more weight to the story, keeping you interested in what happens until the end.

For the most part, Remember Me is a polished and visually pleasing title. It wouldn’t be an exaggeration to say that it’s one of the most unique looking that is currently available on the current crop of consoles. The one thing that first struck me was the resemblance it had to another Capcom title, Devil May Cry. Although Devil May Cry’s gameplay mechanics are very different to Remember Me, from an art style perspective Remember Me is very similar in terms of its look. Talking of art style, Remember Me has a futuristic and clean graphical look, with a huge amount of detail featured in the environments. Stunning looking backdrops that work in tandem with a very smooth animation engine bring the whole Neo-Paris world to life. Nilin’s character model looks fantastic too, and you can instantly see that a huge amount of work has been put in to make her look as good as possible.

As great as all of the above is, there are some sections of the game that haven’t has the same attention paid to them. Generally, the cutscenes look fine, but there are some that just don’t go with the main ‘polished look’ that features so heavily within the game. There are slight rendering issues during some cutscenes and the majority of enemies have some shockingly low-res textures. These are small negatives though, as the rest of Remember Me is visually very impressive.

Story driven games and good sound design go hand-in-hand, so it’s great news then that Remember Me excels when it comes to audio. Not only do the effects work brilliantly within the context of the action, the orchestral score really adds to the game, bringing tension and emotion to the proceedings. In fact, the score that is used during the opening sequence set the tone so well that it made me go and who composed it. Step forward, Ovivier Deriviere.

With Remember Me, there is enough in the gameplay to accommodate all different types of players and play styles. The main and most prominent point of the game is the combat. It works very well indeed and ties everything together in relation the story. At the same time, it never becomes stale and repetitive due to the game featuring exploration and climbing that breaks up the combat well. Anyone that has sampled Rocksteady’s Batman titles will feel at home with the combat sections that are featured in Remember Me. They are very similar in execution, with counter attacks being a huge life saver when your faced with the enemy Leapers that are spread throughout the dingy sewers in Neo-Paris.

Staying with the combat system, you have the ability to create your own custom combos via a system ingeniously titled the ‘Combo Lab’. The system allows you to end up with a different outcome depending on the button you press during the combo. Combos can be customised to give you extra damage and health re-generators. One even gives you the option to chain together more combo moves. The more enemies you progress and defeat, the more upgrades you’ll receive. It’s great because it adds to the smoothness of the combat system and works very nicely within the context of the game. It does get a tad complicated in the latter stages of the game though, which results in some wild button bashing instead of cultured use of the combo lab system. Less an issue with the combat, the camera occasionally struggles to keep up with the action. When you only have a few Leapers attacking you, it’s a pretty simple affair, but if you have a big group coming at you it can become challenging. Speaking of enemies, alongside the Leapers (the most prominent enemy in Remember Me) you’ll come across a few different types further down the line that will put your abilities to the test. For example, some enemies will go invisible and there are also some tasty boss battles, which aren’t particularly game changing but still pretty good nonetheless.

With Nilin having the ability to alter and tamper with peoples minds, it adds a nice little twist to gameplay proceedings. You could almost call it Remember Me’s trump card that breaks up the game when combat and traversal sections superbly. During certain parts of the game, Nilin can use her abilities to alter the story when an important character is involved within the storyline. During this point, you have the option to change that character’s memory when crucial events occur and in turn change the course of history within the story. At first glance these sections just look like cutscenes, but they are in fact interactive. You have the ability to rewind, fast forward and slow down time by using the analog sticks to detect glitches (parts that can be changed) to alter parts of the memory. These sections really add another layer to the story within Remember Me and you can see straight away just how much effort has gone into making these sections fit in with the rest of the world.

Remember Me features a detailed and vast single player campaign that will keep you thoroughly entertained for hours. Alongside the story section and the main missions within the game, there are plenty of side collectables dotted around the games Neo-Paris location to collect including ‘Mnesist Memories’ and ‘Hidden Stashes’ that show you a location in the city you have to locate within the vast environment. Aside from that, the single player campaign will give players plenty of time to become engrossed in the city and its surroundings.

While there are some slight issues with the game, Remember Me does a fine job at creating a world that is fun and engaging. It doesn’t exactly reinvent the third-person genre, but borrows and uses similar mechanics that other good titles have adopted, putting its own spin proceedings.

A single player campaign that’s kept fresh thanks to the fantastic combo lab, ingenious memory remix sections and a gorgeous world that is a real joy to explore. A slick, satisfying package, Remember Me is well worth your hard earned cash.