The first HD remaster of 2016 hits in the form of Capcom’s 2003 GameCube exclusive, Resident Evil 0, which has been given a coat of polish for next gen consoles. Is it worth picking up for people who never experienced it 13 years ago, or is this one Resident Evil title that should have been left in the past? 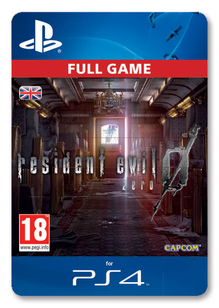 Resident Evil 0 has a slight chequered history associated with the house of Mario. Originally in development for the N64, the size of the available memory in the system led the team to find a home for the game on the recently announced GameCube console. It was eventually released in Europe in March of 2003, six months after the GameCube remake of the original Resident Evil which itself received a HD re-release last year on PlayStation and Xbox platforms.

The game acts as a prequel to the first couple of Resident Evil games, telling the story of what happened to the STARS Bravo Team before the mansion incident and the famous Racoon City outbreak. The player initially takes command of Rebecca Chambers, a non-playable character from the first game, who soon meets up with escaped convict Billy Coen, starting an uneasy friendship with him as they work to survive undead horrors on a runaway train. Despite it being a prequel, there is an assumption that you’ve played at least Resident Evil and Resident Evil 2 as the game makes reference to one or two things that could be considered spoilers if you haven’t. It’s far from the worst story in the series but it’s certainly a lot cheesier than the first two games in the franchise.

The Rebecca/Billy mechanic of the game was, at the time, a true innovation for the series. The player could control both characters at the same time, have the AI control the other or switch between the two. This dual character mechanic has since been used in other titles but I’d argue that Resident Evil 0 pulls it off best. As the gameplay is still a fixed camera perspective with a heavy focus on puzzle solving over straight up run and gun action, the character switching is required to figure out how to progress. For example, an early puzzle sees Rebecca trapped in a room with an object wedged into the door handle on her side. Billy can explore the train and find an ice pick which would release the handle but needs to get it to Rebecca; the trick is then finding out where the dumb waiter in Rebecca’s room comes out and using it to send up the ice pick.

As it’s an early Resident Evil game, the controls use the traditional “tank” method where left and right on the stick turns the character, with forward and back moving them. There is an “alternate” control scheme which provides free 8 way analogue movement, however I found this hard to use; I’d constantly be running into a different camera angle to find myself pointing the stick in the wrong direction and end up turning back around and running back in the direction I had come from, often into the waiting arms of a zombie. Not fun! Persist with the slower controls and I think newcomers to Resident Evil 0 will find it more rewarding; it’s not a fast paced game and doesn’t need to be played like one.

Pace again is a strong point for Zero – where modern Resident Evil titles focus more on shooting down waves of enemies, this is from the era where zombies are seen infrequently and the game gives a persistent feeling of imminent dread – what’s round that corner? That corpse I just passed… it’s not there any more. Where is it? And what the hell do I need this “Helmet Key” for? The small inventory forces you to manage items, balancing consumables such as health herbs and ammo against potentially useful keys, handles and other such objects. Gone are the storage chests prevalent in Resident Evil 1 – 3, replaced here with the ability to drop items anywhere. Helpfully, the map shows you exactly which item you dropped where, however I’m sure modern gamers will balk at the idea of having to backtrack to pick up something they’ve just found a use for. Again, though, this is Resident Evil as it should be; slow paced and thoughtful.

So, with all this talk of Resident Evil 0 being an old game, how does the HD remake stand up visually? Well, it helps that the game was a decent looker in the first place, making use of pre-rendered environments, allowing the game engine to focus on highly detailed character models. For the remaster, Capcom have taken the original backgrounds and re-rendered them for display at full 1080p. As impressive as they were before, these backgrounds are crisp and clear on modern HD displays and truly pop with detail that was previously hidden on the lower resolution screens. As the GameCube display was a 4:3 aspect ratio, the team has allowed for a widescreen render by employing a vertical pan and scan technique that will shift the image as the player moves. Initially this is a little disconcerting for those used to the fixed camera, but it is something that’s easy to adjust to and purists can turn on a bordered 4:3 mode if they’d prefer. Character models also see a bump in detail with textures becoming clearer and more defined and an improved lighting engine allowing for some impressive real time shadows to be cast over the pre-rendered environments, making everything all the more immersive. Less impressive are the pre-rendered cutscenes. Seemingly upscaled from the original SD version, these are often fuzzy and muted in direct contrast to the clear visuals of the main game and can take you out of the experience, albeit momentarily.

For those players looking for something new in this package, Capcom have added Wesker Mode, where you can play through the game using series antagonist Albert Wesker instead of Billy. Wesker is imbued with wacky superpowers such as a high speed run and the ability to use bolts of energy on opponents. It’s a little bonkers but interesting as an aside once the main story is done. Disappointingly though, this is how the mode is unlocked; once you have completed a run through of the game in normal mode, meaning players who may have already finished the game back in 2002 coming to this remaster looking for a new experience right off the bat will have to play through the story once more before they can dabble here. This is a shame, as last years Resident Evil Revelations 2 gradually unlocked its side mode, Raid, as you progressed through the main story.

There’s a lot to like about Resident Evil 0 HD. The move to 1080p has made an already impressive looking game even better and it’s great to experience a time when playing Resident Evil required a bit more thought and was a damn sight scarier. If you’ve never played an older Resident Evil game, however, I’d recommend you pick up last years Resident Evil HD before this one; it has a better story which would be spoiled were you to play Zero first. Luckily, both games are available in a double pack priced at £25 – not too shabby for two classics of survival horror.