The Resident Evil series is without a doubt one of Capcom’s most successful series. Back in my younger days, I remember playing Resident Evil 1 and 2 and the jumping out of my skin several times. Some of you may of heard of Resident Evil: Revelations before and that’s because it was first released on the Nintendo 3DS last year. Capcom has now decided to bring that the former 3DS exclusive to the home consoles and PC so that more people can enjoy the horrors that Resident Evil: Revelations has to offer. Was it a good decision? Read on to find out. 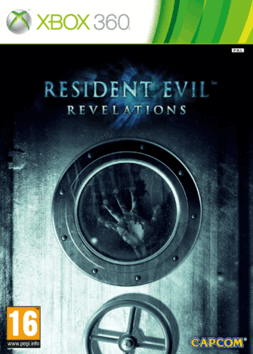 If you have gone though the Resident Evil series then you know that this won’t come as much surprise when I say that the game revolves around BSAA members Chris Redfield and Jill Valentine. However, in Resident Evil Revelations, the pair are mainly set with different partners to accompany them on their mission. Chris is joined by Jessica Sherawat whilst Jill is partnered with Parker Luciani. The story revolves around the aftermath of the attack from the terrorist group, Veltro who launched a bioterrorist attack, resulting in the FBC using their sattelite in order to destroy the culprits and send the city of  Terragrigia underwater. A year later, the BSAA send Jill and Parker on a mission aboard to SS Queen Zenobia where Chris and Jessica are are known to be stranded. Their mission is to also investigate if Veltro has made a return and planning another terrorist attack.

The interesting element in regards to the story is that you get to play through the game from each angle. Like the 3DS version, it’s split up into fairly lengthy 12 episodes. There are certain episodes you play as Jill whereas others are played as Chris. There are even a couple of instances where players will take control of Quint and Keith. Whilst the story is mostly enjoyable, I didn’t find my self gripped. If anything, the majority of events that occurred along the way were quite predictable.

Like most of people, I was very curious to see how Capcom would turn Resident Evil: Revelation’s visuals from a 3DS title to a fully fledged current-gen console title. Although the visuals don’t quite match up to the likes of Uncharted or Tomb Raider, Capcom has done a fantastic job in bringing a handheld title to the big screen. It could’ve been just a lazy port, but apart from a few minor blemishes (frame rate issues in lifts and some shoddy textures) Revelations looks like it belongs on the current crop of home consoles. Even the cut-scenes have had a nice coat of HD goodness applied to them.

Resident Evil has always been about the tense, creepy music that accompanies players on their mission, keeping them on their toes at every opportunity. Unfortunately for me, I found this scary, tense feeling hard to come by in Revelations and for a series that is arguably the pioneer of the survival horror genre, I was left very disappointed by the audio that accompanied the game.

Don’t get me wrong, there were moments where there was some suspense building as I was turning a corner or going into a dark corridor but these moments were very hard to come by. Whilst the sound may have been good enough on a portable console such as the 3DS, I would of hoped for a little bit more for the current-gen consoles such. I hope that Capcom address this and bring the series back to the horrifying best that it was back in the PlayStation days.

On the gameplay front, Revelations does most things right. However, it does that without adding anything new to the formula. Going through the game, I felt a certain familiarity that turned into repetitiveness during certain sections of the game. That’s not to say Revelations isn’t an enjoyable experience, it is, but I was left wanting some new ideas and gameplay elements.

That said, one of the things I did love about Revelations was the fantastic Genesis Scanner. Equipped with the use of LB, the Genesis Scanner helps you scan the infected BOWs. Once you reach 100%, you’re rewarded with a green herb which can be used to restore health. To add to that, you can also track down hidden ammo packages for weapons.

There are certain RPG aspects in the game too, as you can search for custom parts which then can be applied to a weapon in order to upgrade the damage taken by a single bullet. There are games I have played in the past where ammo and items are hard to come by as they are scattered too far apart, but here the ammo and other items were placed perfectly, allowing me to enjoy the game more rather than track back contantly.

Whilst this Revelations re-release is an impressive visual upgrade over its 3DS predecessor, movement in the game isn’t as fluid as you’d expect. Whilst it’s hard to pinpoint, it seems like the movement falls in line with the 3DS rather than taking into account the home console pads. There were many times during my playthrough where a boss was approaching me with speed, only for me to be too slow to be able to get out of the way causing me to take damage and use more green herbs than I wanted to. That’s not to say the movement in the game is terrible, far from it in fact, but it does seem like it needed tweaking a little when making the transition to home consoles.

I managed to complete the main story and its 12 episodes in roughly just over 10 hours. Whilst, campaign wise, there’s not much to go back for, if you’re so inclined you can go back for better ratings or play on harder difficulty settings that will most certainly test your survival horror skills. There is also the extra Raid online mode, which sees players take on enemies solo or via co-op in a variety of different stages.

After the confused and all-over-the-place Resident Evil 6, Revelations was Capcom’s chance to bring the series back to its roots on the big screen. For the most part they’ve done exactly that, but there are still areas that need improving if they’re to succeed with future releases. Whilst it’s an impressive visual upgrade of a handheld title, during gameplay you can almost smell its 3DS origins. That said, fan or not, it’s a title that most will enjoy, but fresh ideas are needed if the Resident Evil series is to reach frightening heights once again.