If you’re a fan of first-person shooters and are picking up a PlayStation Vita on launch, you’ll be happy to know that you won’t have to wait too long to get your hands on Resistance: Burning Skies.

Sony has announced that the title will be available for their shiny new handheld on May 29th in North America and May 30th in Europe, making it the world’s first portable dual-analog first-person shooter.

In addition to announcing the release dates, Sony also unveiled the game’s box art, which according to them “recalls some of the eerie essence of the classic Resistance: Fall of Man”. What do you guys think? 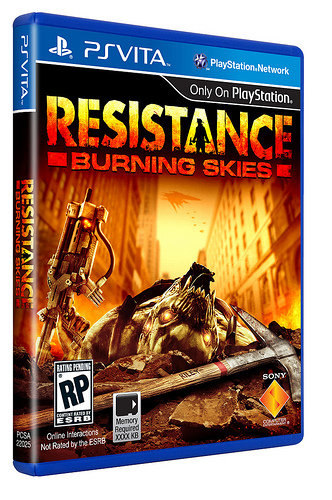 We previewed Resistance: Burning Skies back in September last year and were very impressed with what was on offer, so much so that we stated:

“It’s early days at the moment, but if Burning Skies lives up to its potential then it could well end up being an essential PlayStation Vita title. Not only that, it could also usher in an era of decent, playable first-person shooters on a handheld.”

Are you looking for to Resistance: Burning Skies? Let us know via the comments section below.