About a month ago, Dave posted his Retro article on FIFA International Soccer. I thought it was really interesting to look back at previous FIFAs and see what’s been improved or removed, as well as enjoying the nostalgia. It pains me to admit that it was 100% Daves idea.

So now it’s my turn, and following on from where Dave left off, i’m going to take a look at FIFA 97,which I picked up for a quid I think. David Ginola is the cover star and got involved with the Motion Capture, which probably wasn’t cheap. I decided to skip over FIFA95 and FIFA96 because although there were some pretty big changes, Club teams introduced in ’95 and a player/team editor in ’96, I wanted to take a look at a feature that people have been begging EA to bring back. Indoor Matches. 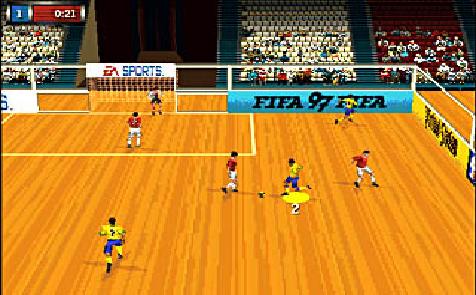 The intro is suitably 90’s, a mixture of real world footage and severely dated 3d lettering, back then it looked great, now it looks like the 3D lettering from word. That’s what 13 years will do for you I guess. To give some perspective, I put a lot of time into FIFA97 on the PC and I do mean a lot, it’s weirdly one of the FIFAs I remember most fondly from when I was younger. For this, I picked up a playstation copy and played it on my PS2, but I did use an old school playstation pad without sticks and listened to Be Here Now whilst playing for that full on 1997 experience.

In game, the nostalgia isn’t really enough to hide how clunky it feels. It seems harsh to call something so old clunky but anyone who played it won’t remember it for being silky smooth. I think the reason for this is that it was only the second outing of the 3d tech, virtual stadium, used in the game, I dug out some screens from the mega drive version, which used the older engine, and they look pretty good. EA were obviously impressed with the tech themselves, with this video playing if you left the menus idle:

I included that because the kid at the end makes me laugh every time I see it, thankfully my tv didn’t explode…

Now, whilst all that sounds really negative, remember two things. I’ve been spoilt with the recent leaps in technology and graphical improvements, and I didn’t say that the points above stop it being fun.

The passing is heavilly assisted but still manages to feel quite fluid. It locks to the target and frequently skips straight through a defender to get to it’s destination but there are still a fair amount of loose balls and interceptions, pressing pass doesn’t guarantee that one of your players will recieve it. One thing i noticed is that set peices and drop kicks from the keeper arent locked so if you want to boot a corner straight back out of play, you can. A more practical use is putting the ball into space without having it lock onto a player.

Shooting is probably the most frustrating part of the game. It’s not too easy or too hard to score but, most likely due to a lack of animations, whenever you shoot your player will correct themselves to be squarely behind the ball. If you’re headed directly towards the goal it’s not that bad, but if you’re cutting in from the wings it adds at least a second to your shot, which is more than enough time for a defender to throw themselves in front of it.

Tackling is, hilariously, much “better” than FIFA 11. Sounds like a dumb thing to say considering there is only one slide tackle animation, which targets the ball like a heat seeking missile, but the key is that you only win the ball if you press tackle at the right time. Such a crucial point, which means you have to think whilst defending. From an AI point of view, defensively it feels a bit rubber bandy but it’s not over the top and strangely doesn’t cause too many problems. Whilst there are no noticable pressue issues defenders do track you with ease and mirror your run completely in time with you making it. 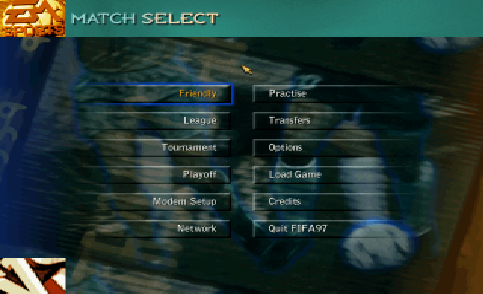 In terms of menu options, pretty much everything you would expect is there,  straightforward friendly matches, League, Tournament, Playoffs, Transfers etc. All game modes offer the chance to play them either indoors or outdoors which is an awesome touch. As you would expect, there isn’t much involved in the league and tournament options but the idea is there. It’s match upon match with the results being tracked and little else. Transfers are pretty straightforward, it’s basically just a squad editor across all modes with the option to swap players like for like without any fees involved.

In terms of Team choices you can pick from the top flight in the English, Brazilian, United States, Spanish, Italian, French, German, Scottish, Dutch, Swedish and Malaysian Leagues as well as International teams. There are 3 difficulty levels, beginner, semi-pro and pro, but i’ll be damned if i could spot any difference between any of them. The team management screen offers various formations and the adjust base position tool works really well.

Other nice touches are the camera pans to the scoreboard at half time, which frequently plays a little video sequence, the celebrations are pretty varied and sometimes hilarious. It does feel like a great amount of care has been taken over some of the smaller details. 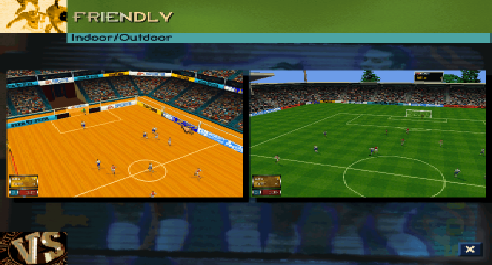 The majority of my play time was spent playing indoors. Even on that terribly dated engine, it’s great fun. I spent most of my games longing for EA to cave in and bring this into FIFA 12 (“if” there is one…). It’s fast, exciting and horrendously addictive. I can only imagine how well it would play on the current engine. There’s lots of one touch, short passing and you can go from seeing a shot saved to picking the ball out of the back of your own net within seconds. I know we all complained about ping pong passing etc, but in 6 a side game it fits well and adds a touch more excitement to matches. It needs to be brought back badly, it’s just so much fun. I appreciate there would be a fair bit of work involved in creating indoor arenas and changes to the AI etc to keep things balanced but it would be well worth it. You could even incorporate it into CM, with a few seasons in the Masters League with your pro between being a player and a manager… Wishful thinking i guess, but a lot of people have been asking for it for a long time, hopefully somone is listening.

So that’s about it. It was fun to revisit an older FIFA, particularly one I enjoyed so much at the time. It’s not aged particularly well, but if you can look past the graphics it handles the basics solidly and the indoor mode is not to be sniffed at, if EA were to bring it back, the potential for tournaments and places like the FVPA to get involved would be pretty exciting. FIFA Street just isn’t the same.