This week’s piece is a really difficult one to put together. As I’m sure a number of you are aware, it was announced on Monday that Ryan Davis of Giant Bomb passed away. He was 34, and had been married for less than a week when he passed.

The outpouring of tributes to Ryan in the last few days (Including a lot of artwork, such as the header image for this post from Giant Bomb user Sanj) has been enormous, and it has been truly heartwarming to watch the Internet’s gaming community come together as one in the aftermath of such a tragedy. The problem is that this has hit me quite hard, and in the grand scheme of things, I really have no right to be this upset by it. Someone I never met, from another country, who wrote things about videogames has passed away. That should be it, move on, get past it. The truth is, Ryan and the rest of the Giant Bomb crew have been more than that to me. I signed up for a premium membership with them around 3 years ago, and was a fan of the Bombcast for a year or so prior to that. I spent 3 hours or so a week listening to Ryan, Jeff Gerstmann and the others talking about subjects stretching far and beyond videogames for almost 5 years. It’s hard to not feel anything for someone when you’ve spent that much time in their “company”, despite never meeting them.

If it weren’t for Giant Bomb, I wouldn’t have started writing for NGB. I know I’m relatively new here, but I am thoroughly enjoying being a part of the team, and being given the platform to detail my opinions, both written and on the podcast. A lot of my enjoyment of games has been tied to some of the stuff Giant Bomb have done over the last couple of years. I probably wouldn’t have checked out Spec Ops: The Line, which ended up being a really powerful experience from this generation. Additionally, I’ve picked up the likes of Binary Domain and several smaller iOS and downloadable games because of their Quick Look videos and discussions. They showed that if you have the personality and talent, naturally great content will flow, even if it was sometimes the silliest thing imaginable. (See below, for what is possibly my favourite Ryan moment ever)

The number of people saying the same sort of thing as I have above is a testament to the creativity, personality and sheer likeability of Ryan Davis. The familiar “Hey everyone, it’s Tuuuuuuuuuesdaaayyy” intro to the Giant Bombcast was a staple of my week, and I actively looked forward to downloading the latest episodes every Wednesday morning (The irony of being a UK based fan and always listening on Wednesdays was not lost on me).
I can’t begin to imagine what Ryan’s friends are feeling right now. I lost someone close to me way too young a number of years ago, and the feelings of numbness and disbelief were similar to those flying around Twitter etc this week. From a personal point of view, it’s been a really tough year so far, and this has brought a lot of feelings to the fore. Those who follow Giant Bomb will know that John Drake and Harmonix have a particularly tight relationship, and Drake has been incredibly active with his fanbase on Twitter this week. He summed it up to me in the exchange below, crystallising the relationship that Ryan and his fans had. 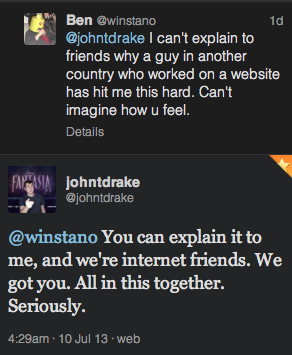 I wish I’d gotten a chance to meet Ryan. The aftermath of the “Gerstmann-gate” story at Gamespot, coupled with Ryan’s loyalty to his friend, led to the creation of Giant Bomb, and in turn one of the finest videogame websites on the internet. Whilst I wouldn’t consider myself a journalist, I can only dream to be a part of something that influential in my future, and I’m sure the rest of the NGB crew will join me in passing on our sincerest condolences to Ryan’s family, friends and all over at Giant Bomb. He will be missed enormously.