Pirhana Bytes’ 2014 pirate themed RPG has been brought across to next gen machines with all DLC included and a graphical spruce up to boot. Is it worth a look or is it dead in the water? 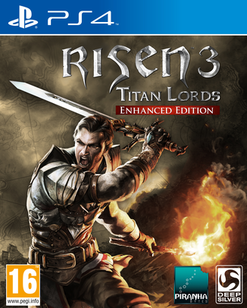 I first encountered the Risen series on PC. A spiritual successor to the critically acclaimed Gothic, Risen is a tough RPG in which a nameless character finds themselves washed up on a desert island and slowly has to explore and piece his life back together. I enjoyed the game for its atmosphere, decent voice cast and well realised world but lamented a lack of character creator and a slightly stingy loot system. Risen 2: Dark Waters upped the aesthetic to a more swashbuckling pirate themed adventure and Risen 3: Titan Lords continues that, this time mixing in a bit more of the fantasy elements from the first title.

Again, the player takes control of a nameless hero, a pirate Captain who we join in the middle of a nightmare which serves as a basic combat tutorial. On waking, he travels with his sister to a nearby island to hunt for treasure. This part of the game acts as both a prologue and a tutorial to the exploration, inventory and magic mechanics of the game. Upon finding the temple in which the treasure is located, a “Skull Cave” appears and spews forth a number of horrors, one of which kills the nameless hero. Laid to rest by his sister, he is resurrected by a shaman called Bones to be sent on a quest to stop the dark horrors taking over the land, which is where the story finally begins.

I really wanted to like Risen 3. I really did. For the first few hours of play I found it to be amusing, it’s issues reminiscent of a bad but lovable B-Movie, but extensive time with the game made me accept that it was bad, no, mediocre.  Unfortunately, the negatives completely weigh out any positives in the game, leaving such a bad taste as you progress through.

Right from the start, it is completely impossible to identify with this nameless hero. A lack of character creation means that you are lumped with a generic, gruff pirate captain who I took to naming ‘Douchey McDouchehammer’. Seriously, Douchey is probably the single worst realised character I have ever had the misfortune of playing in a videogame. He’s a one note, gravel voiced, sweary moron whose sole motivation seems to be that he was once alive, then he was dead and now he’s alive again and his crew have all now took off and left him. The voice actor does little to endear my character, playing him as a mildly sociopathic man with all the social skills of a brick to the face. To say this is terrible voice acting would be an understatement; it’s initially amusing but quickly becomes tiring and being unable to put a name or backstory to your character gives you little emotional investment in their adventure and you begin to feel like you’re simply babysitting this miserable sod on his surly tromp through the world.

The voice acting for the other characters is a mixed bag. Douchey’s sister, Patty, is passable (although her character design leaves much to be desired, looking like she simply found the cheapest “Sexy Pirate Wench” costume off Amazon and decided that was the look she was going to go with) while many NPC’s are voiced fairly well. Your initial companion, Bones, however is an entirely different beast. Voiced like a deranged comedian, all wild affectations, the inclusion of the DLC content at the start of the game lends an incredibly uneven approach to his character as the actor plays down the madness when delivering the dialogue for these missions, leaving you emotionally unattached to the character.

The RPG mechanics on offer are fairly standard and functional, and the character management screens are easy to follow. Experience is awarded for completing tasks and killing monsters which can be spent in order to upgrade your baseline stats. Quests are presented clearly and the mission system allows you to tackle the main story as you see fit, squeezing side missions in. Loot is still very stingy, however, and the fact that you remain dramatically under-powered for a significant amount of time, relying on the strength of your companions to buoy combat, make those early hours the antithesis of fun.

The world of Risen 3, however, should be praised. Presented as a series of self contained islands that can be visited at will, providing a pseudo open world (disappointingly there is no open naval travel ala Assassins Creed 4, although there is occasionally ship based combat scenes) the islands feel very well realised, lush and full of interesting flora and fauna. The story of the world, the overbearing Inquisition, the threat of the Skull Caves and the dark horrors they contain are well written but are undermined by the loose mission system, robbing this of any sense of urgency or danger. Also, despite some attractive visuals the game is plagued by glitches, pop up textures, twitchy shadows, cameras entering character models and stiff, unrealistic animations including lip syncing which doesn’t even begin to try.

Broken combat mechanics are the icing on the cake in Risen 3. Playing out like a poor copy of the Dark Souls combat, the combat drifts right through challenging and straight into unfair. Enemies can pivot and follow your character mid animation, making attacks hard to dodge and a failed lock on system, coupled with a horrible manual camera means that attacks from Douchey tend to come in a flurry of wild swipes which opponents can easily avoid before landing a crippling blow. In fact, the combat system can be gamed by simply letting your vastly superior companions tackle the enemies that you barely scratch with your sword, while you simply dodge roll around the battlefield. It takes the fun out of it, but even if you don’t kill an enemy you still earn the XP.

The context sensitivity is also horribly broken. It is, for example, ridiculously easy to attack NPC’s. There were at least four occasions where I inadvertently struck a quest giver instead of talking to them, mainly due to the twitchy nature of the object context; one of those times was at the end of fighting a monster when my weapon was still drawn and, in all occasions, the NPC turned on me and made their quests unobtainable, forcing me to reload my last save. On another occasion, the context for action switched from an NPC to a nearby object which my character picked up, was accused of stealing and promptly murdered by all other NPC’s in the room.

Attractive visuals hide a game mired by terrible mechanics, terrible voice acting, an unendearing lead character and a plodding, dull story. Glitchy, messy, full of loading screens, Risen 3 would have felt like a poor game ten years ago. Having it released alongside the likes of The Witcher 3, BloodBorne and even Lords of the Fallen, unfortunately, this doesn’t warrant money well spent at all.