It’s fair to say my real life golf skills are bad. No, not bad, absolutely terrible. I do however enjoy a game or two from time to time, and hearing that Rory McIlroy PGA Tour was coming to the new-generation of consoles was something I was really looking forward to. Would I be singing the game’s praise like a well earned birdie, or did leave with a rough, sinking feeling? Read on to find out. 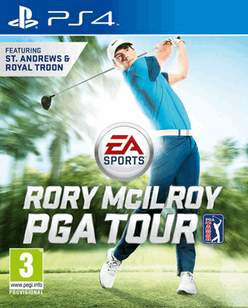 Being the first “proper” golf game on the new consoles, the first thing you’ll notice is that Rory McIlroy PGA Tour looks great. The golf courses, especially the authentic ones, look absolutely gorgeous. You can tell it’s an area EA has really put some effort into, using the Frostbite engine very well. Everything down to the bunkers, lakes and trees all look spot on, adding to the experience and making that quick (well, relatively) round of golf that bit more enjoyable. Disappointingly, it seems that the same attention to detail hasn’t transitioned across to the menus. There is some horrendous input lag and the menus themselves crawl to a stop sometimes. It’s a poor showing from EA in that sense and I can only hope a patch is on the way to sort it out.

Staying with the presentation, thankfully, the sound that accompanies the game is something that I enjoyed. It’s not perfect, sure, but I’ll get onto that in a bit. The crowd noise is good, with the spectators reacting to each of your shots. Might make me seem a tad weird, but the sound of your ball slicing through the grass or splashing into a lake is decent too, adding to the overall golf-like atmosphere. However, the commentary is a bit of a letdown. Delivered by Rich Lerner and Frank Nobilo, some of their chatter is quite good, coming out with details such as course history, but more often than not they made random comments that had nothing to do with what was going on. Strange. It seems like some of the trigger points could do with some tweaking for the next effort.

On the course, Rory McIlroy PGA Tour barely offers anything new. There are three ways to play, all offering different level of assistance. Remember the three-way click shot style from the very early PGA Tour games? Well, that’s in and hasn’t really been changed at all. There is also an arcade style of play, letting you take highly assisted shots with the left stick. If you’re a more confident (unlike me), you can choose to go for the advanced swing option, offering a bit more freedom in terms of putting spin on the ball.

All three shot systems serve up different techniques and ways of playing the game, but I was hoping for something a bit more innovative from EA given the move to the new consoles. That’s not to say you can’t enjoy a good round of golf with what’s on offer. I mean, I did, even if I got bogey after bogey. If you do find yourself in trouble like me, fear not, the game does have a good tutorial mode on offer, easing you into the mechanics pretty well.

Content wise, Rory McIlroy PGA Tour features a few game modes, but it’s not exactly bursting with stuff to do. Personally, I really enjoyed the challenges, mainly because of the way it tested my virtual golfing skills and the fantastic courses. One of the courses will be especially familiar to any Battlefield fans out there. Remember the trailer at last year’s E3 conference? Yeah, that. Sadly, it’s not as “dynamic” as shown there, but still fun enough nonetheless. Hopefully the next iteration will explore that further. If like me challenges are not your thing, then career mode is where you’ll spend most of your time. Here you create your own golfer (with horrible options) and then try to take him/her from a trophy-less amateur to someone challenging for the major honours. Along the way, you’ll build up your attributes, unlock better golf clubs and different golf balls. As far as career modes in sports games go, it’s pretty basic. In fact, that sentiment applies to the entire game. I was so disappointed to learn that there were only 12 real golfing stars and 8 authentic courses. It’s crazy; the first golf game on the new consoles and it’s released with very little content. Of course, the standard online modes are present, with the ability to enter online tournaments, so if you’re a diehard golf fan there’s some longevity for you outside the sparse offline modes.

As far as a first attempt on the new consoles go, Rory McIlroy PGA Tour is decent enough on the course. There’s no real innovation, but it’s hard to argue it plays a good game of golf. Thanks to the power of Frostbite engine, it looks great too. However, that’s not enough, especially when you think about what other sports games offer. The severe lack of content, including the low number of authentic courses and golfers is hugely disappointing. If EA can deliver some worthwhile content and features, the next iteration could be very good. At the moment though, Rory McIlroy PGA Tour is just above par!