The President of the United States crashes through the roof of the Oval Office, after having dispatched a bunker full of terrorists with his own hands, with the remnants of a huge explosion in the skies above Washington DC. Suddenly, aliens interrupt a press conference, and begin a quest to take over the earth. Welcome to Saints Row IV, where all this happens in the first ten minutes and it only gets crazier from there. 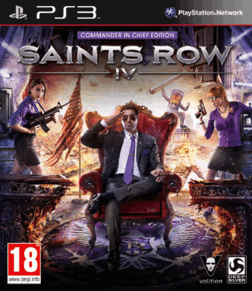 Saints Row IV takes place around 5 years on from the end of Saints Row: The Third. Having dispatched Killbane and his gang, the player’s character (referred to as “The Boss”) has risen through the ranks to become the President of the USA. As mentioned, the alien Zin race then invade, led by the evil commander Zinyak. What follows is a somewhat convoluted chain of events that leads to the Boss being trapped in a Matrix-esque simulation of Steelport, complete with a range of super-powers. That’s right, you’re a super-powered President who’s trapped in the Matrix. If you’re still with Saints Row IV at this point, you’re probably going to enjoy it.

The game progresses as you pick up other members of the Saints gang. Shaundi, Kinzie and Pierce are all there, as is Matt Miller, one of the antagonists of the third installment, who joins you in the quest to bring down Zinyak. In order to retrieve the members of the Saints, you are required to go into a “nightmare simulation” for each of them, where your super-powers are stripped, and you face each of the Saints’ worst fears and help them escape, in a way that is remarkably similar to The Matrix series of films. In fact, there are nods to a number of movies and games all the way through Saints Row IV, including the likes of Metal Gear, Streets of Rage and Halo. All in all, the story is remarkably silly, but it’s enjoyable, and the game never takes itself too seriously.

Saints Row IV won’t win any awards for its graphical prowess on consoles. Whilst this will inevitably be compared to Rockstar’s upcoming GTA V by some, I don’t think it’s fair to mention the two together. Sure, they’re both open world games, and GTA looks absolutely stunning from what we’ve seen, but Saints Row is aiming for something different, this is all about having fun. There are some nice touches in the virtual environment of Steelport, such as walls seeming to pulsate at times, and some of the weapon effects look spectacular (The inflato-ray in particular produces some hilarious results).

The virtual Steelport does feel a little flat at times during the early going. There were instances where I didn’t feel like I was in a living city, more a shell of what could have been. This picked up towards the end, however, and I definitely felt a much bigger part of the game after the first third had passed. As you take over more of the city, the colours begin to change and it looks less like a computer simulation, and more of the Steelport of Saints Row: The Third. It’s a neat touch that goes a long way to making the player feel engaged.

Unfortunately there’s a bit of screen tearing, and there were some frame rate issues as well at times, with one mission dropping down to borderline 1 frame per second on the first attempt (I replayed the mission and it was fine). However, this didn’t really detract too much from the enjoyment of the game. If you’ve played Saints Row: The Third, expect a similar level of graphical fidelity from this.

The sound design is one area where Saints Row IV excels. The music that Volition have licensed for the game has been used to fantastic effect, with some superb backing tracks to key gameplay moments and cut scenes. The use of “I Don’t Wanna Miss A Thing” by Aerosmith in one early gameplay moment is possibly the best use of an Aerosmith track in gaming, and they had their own Guitar Hero spin-off! I shan’t spoil anything, but there are some superb moments linked to the game’s soundtrack that I found myself grinning quite widely at during my playthrough.

Having said that, there are some weird audio level issues. The sound during the cut scenes seemed to be much lower than the rest of the gameplay, meaning a constant juggle with the TV remote. The lack of audio settings to try and rectify this was a bit of a frustration too.

The gameplay in Saints Row IV is defined by the new super-powers. Whilst in the Saints’ previous outing, cars and aircraft were the methods of transport du jour, in SRIV you aren’t bound by convention and can leap hundreds of metres at a time with your super jump ability, as well as overtake most cars with your super speed. Throughout the game, you accrue a decent array of skills, including telekinesis, a pounding “stomp” ability, and ice/fire throwing capabilities. All of these abilities are upgradable, and by the time the endgame rolls around, you’re more than well enough equipped to take on the Zin army in the virtual environment.

Pre-launch criticism of Saints Row IV has stemmed from the fact that Volition announced that it was originally going to be a standalone expansion for SR3 entitled “Enter the Dominatrix”. Many have perceived this to mean that the entire game is essentially a glorified piece of DLC for a two-year-old game. I will say that whilst parts of the game feels similar, it’s an unfair criticism. New introductions breathe new life into the franchise, with the “special” weapons proving to be interesting additions. The super-powers really do bring in a new dimension to the gameplay, and whilst parts could be described as “Standard open world fare”, Volition have done a sterling job in making the main game a fun and engaging experience.

The main story took me around 15 hours to complete, with a few side missions thrown in for good measure. If you’re looking to do everything in the game, this will easily be a game you can play for a couple of months, and the addition of co-op looks to be a fantastic way to spend some time online (NB: At the time of going to press, the online side was not yet available).

The typical open world tasks are there in abundance. There’s races against the clock, there’s the “mayhem” missions which involve causing as much chaos as possible, and a lot of “clear this area of enemies” missions as well. The problem comes when these are tied into side missions from your crewmates. Whilst the missions in themselves are fun, the fact that the side quests from different crew members repeat the same few tasks over and over sometimes feels like a way to pad out the game with little effort, and a little more variety in side quest types wouldn’t have gone amiss.

Having said that, however, each of your shipmates has a loyalty mission, and these are fantastic fun. They transport you back to a nightmare simulation, and you’re usually tasked with eradicating some unusual aspect of your buddy’s past in order to gain their loyalty and give them access to super-powers as well. I just wish as much thought had gone into the other side quests as these excellent mini missions.

Saints Row IV is a brilliant open world game that doesn’t take itself seriously at all. It combines everything that was good about Saints Row: The Third and dials it up to 11. The humour in the game is fantastic, not once straying into “wacky” territory, which could have been so easy to do. There are some excellent surprises throughout the game, and it genuinely had me laughing out loud at points. Once you’ve settled into the VR reconstruction of Steelport, the game really does start to click, and the abundance of things to do can be slightly overwhelming.

The criticisms thrown at Saints Row IV for being a “glorified expansion pack” are extremely unfair. Whilst it may be set in the same place (albeit virtually) as the previous game, Volition have added enough fun new elements into the mix to justify this as a standalone game. The story doesn’t really suffer from any pacing problems traditionally found in open-world games, and it ultimately leads to a very satisfying conclusion. The only drawbacks are the slight technical issues and the lack of continued variety in the side quests. However, when a game is as fun as Saints Row IV is, I’m prepared to overlook that to a point.

Who would have thought that a semi-serious GTA clone would spawn a franchise where you play the President of the United States of America as he hurtles through a virtual reality with super powers? Saints Row IV is not going to redefine the open world genre, but Volition have stuck to what they do best and made a genuinely fun and engrossing game that has enough to satisfy both fans of the series, and newcomers alike.