For some reason, it seems like rally games are making a comeback. WRC 5 and Dirt Rally (for the PC at least) are both out, soon to be joined by Sebastien Loeb Rally EVO. As someone who loved the old Colin McRae and Rallisport Challenge games, this sudden surge in the genre is very much welcome. Sure, WRC 5 is a mixed bag, but Dirt Rally is damn good. Hey, there’s more than one decent rally game, that’s the point. Does Sebastien Loeb Rally EVO make increase the number to three? Yes, it does exactly that. 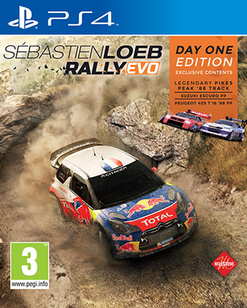 Let’s get one thing straight from the off, Sebastien Loeb Rally (I’m not adding the EVO bit, seriously) is a simulation. If you’re expecting to load up the game, start an event and drift around its tracks with ease, you’ll be shocked. Even with the assists on, it’s a simulation. There’s a very short tutorial at the start, but apart from that you’re left to get on with it. You can choose to get to grips with the handling in the test drive “arena” or just dive into one of the game’s modes. It’s a sink or swim approach, one that works well in Sebastien Loeb Rally.

In the run up to the game’s release, Milestone has been keen to show and tell everyone that the studio worked closely with Sebastien Loeb himself on the handling. The aim (obviously) was to produce that realistic, on-edge feel of driving a rally car, and they’ve succeeded in doing exactly that. Whether I was playing with assists on or off, I always felt like I could lose the car at any given moment. On the flip side, I felt like a rally god speeding over bumpy straights and twisting around tight bends. The euphoria, that feeling when you nail an event, is brilliant. I tinkered a bit with the advanced car settings, but not being a huge petrol head kind of limited my knowledge when it came to certain adjustments. That said, if you do happen to be into your motorsport in big way, Sebastien Loeb Rally gives you pretty much all the options you need to tweak the experience to your liking.

Obviously, being a simulation and having so many hardcore elements comes with a few caveats. Well, one to be exact. Unless you’re a rally master, it will take you a good few hours to get used to the handling model. The learning curve is as steep as they come. In my first few hours, I was constantly going off the track or spinning out of control, but slowly got used to the intricacies of Sebastien Loeb Rally’s realistic handling model. That’s not to say I was perfect after a few hours, far from it actually. I was still spinning out occasionally, but when I did I knew it was my fault. More often than not, I had pushed the car a little too much and lost either end of it. You see, the key to getting better and staying on the track is mainly about balancing the weight of the car. Whether you’re on a tricky straight or taking on a challenging hairpin turn, you need to keep the weight of the car as balanced as possible. Yes, that’s important in other racing games as well, but it’s doubly so here. As soon as you lose either end of the vehicle, it’s vital seconds lost or game over. You can choose to go into an event with Forza style rewinds, but even they can’t save you completely as they’re limited and have a refresh time.

The simulation theme continues with the tracks too. Milestone claim the locations in Sebastien Loeb Rally feature accurate track width, with ditch and bump thrown in for good measure. Now, I don’t know every single track in the game like the back of my hand, so I jumped on to YouTube for some help. Well, some guidance at least. I’m not 100% sure about every ditch and bump, but Milestone seem spot on with their track width claim. Man, some of the later courses are tight. I found it a struggle at times, having to do events multiple times because I clipped the side of a track. Just go for a “spin” on Pikes Peak and you’ll know what I mean. As you’d expect, the different surfaces and weather conditions make navigating some of these tracks even trickier, despite the accurate instructions from your co-driver.

As well represented as the cars and the tracks are technically though, Sebastien Loeb Rally lacks that visual polish that truly makes them shine. It’s quite a bland looking game, falling way behind the likes of Driveclub and Forza Motorsport 6. I don’t know if all the processing power has gone into the handling and creation of tracks, but you’d be forgiven for expecting a better looking game on the current crop of consoles. The PS4 can do better and Sebastien Loeb Rally doesn’t take advantage of that. Textures quality isn’t the best and none of the car views look that great either. The in-car view is especially disappointing, lacking detail and overall image quality you’d expect from a game in this genre. It’s a shame, because it would definitely make the driving itself feel a bit more immersive. Taking all of this into account, it’s strange that the game runs at 30fps on consoles. I doubt it’s pushing the PS4 to its limits, so why not 60fps? Weird. Again, for a game of this type, 60fps would’ve made it a better experience.

Those negatives aside, there is plenty to enjoy in Sebastien Loeb Rally should you get past the steep learning curve. The career mode is the main course, challenging you to rise up the ranks and eventually join Loeb’s team. You’ll take part in series, broken down into many events on different tracks, each requiring the use of increasingly faster yet trickier to handle cars. In fact, the biggest test here is not the change in location but how you cope with switching from car to car as you progress. It’s a massive mode, one that will take you a good 40-50 hours to master and finish. However, just in case you’re a pro, there’s more stuff to do. You have the Loeb Experience, where you learn about the main himself and play through key parts of his career. It’s a cool mode, one where you get to learn about Loeb the driver and his climb to the top. Plus, you get to drive some of the better cars much earlier than career mode which is a bonus if you’re a tad impatient. Staying with that theme, quick mode gets you onto the track without much fuss in either rally, rallycross, Pikes Peak or time trial form. A standard inclusion for most games in the genre. There’s an online component too, allowing you to get into quick matches, create your own and even search existing lobbies. The usual ranking and leaderboards are present as well. If you really “get” Sebastien Loeb Rally, you’ll be spending a lot of time here I imagine.

And that’s the thing with Sebastien Loeb Rally, if you get then you’ll love it. I mostly got it, but that’s only after I put several hours into it before getting past the learning curve. It doesn’t hold your hand, which is no bad thing, but I can see it putting off some people. Taking this kind of hardcore, simulation approach with a relatively unknown IP is a risk. It’s no Dirt Rally. By that I mean it doesn’t have a strong brand or following like Codemasters does. It’s less of a gamble for them in that sense. Still, I think it’s a risk that (for the most part) has come off for Milestone. The studio has produced a solid rally simulation, one that I can see getting a dedicated, hardcore following and hopefully flourishing that way.

The bland visuals and lack of 60fps on consoles aside, Milestone has mostly delivered the goods. Not for the impatient or easily frustrated, Sebastien Loeb Rally EVO wears its hardcore, simulation rally badge proudly. The learning curve is a steep one, but if you stick with it you’ll unearth a rewarding and immensely satisfying rally experience. Just be prepared for a lot of swearing.