Shadow of the Beast Review

Rise from your gra… Oh, that’s the other one.

Psygnosis’ Amiga classic is the latest title to get the reboot treatment, with Shadow of the Beast making its way to the PS4. Does this modern take on it live up to the memories of the late 80s? 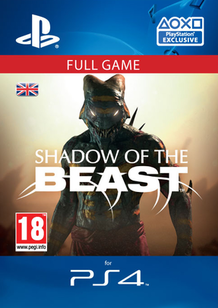 It’s been over 25 years since Aarbron’s story was told, with the original Shadow of the Beast becoming an iconic moment in gaming. Heavy Spectrum have been given the herculean task of hauling the story into the 21st century, and onto the PlayStation 4. Sticking to its side scrolling nature, it’s a reboot that’s brought mixed results.

The game starts with Aarbron being held in chains by a mysterious demon named Maletoth, and being essentially forced to do his bidding. Aarbron makes his way up to the top of a castle, and slays anyone in his path. It becomes clear, however, that one of these individuals is his own father, thus setting off a tale of revenge. In its broadest strokes, it’s a similar narrative to the original, and it’s a nice touch. Throughout Aarbron’s journey, he encounters a number of different enemies with several bosses throughout the levels, each with certain unique abilities that require you as a player to adapt to their attack styles.

The modernisation of anything is always a bit of a minefield, and it’s one that’s been navigated with a varying degree of success with Beast. Environments definitely look nice, and there are moments where the game has definitely set its sights on aping the God of War franchise in places with some of the introductions of bosses and other enemies. Sadly, it never really hits these heights, and often feels underwhelming. The game is focused heavily on combat encounters, which occur when two white “walls” appear to the left and right of Aarbron, and enemies will stream in. For the most part, it’s a relatively straightforward affair, with a distinct “score attack” feel to it, although it does border on the “samey” side on more than one occasion. You can level up your attacks, as well as obtain Talismans, which allow you to gain buffs such as negating fall damage and increase the level of blood you pull from your enemies (which in turn allows you to unleash special abilities). The repetitive nature of things isn’t helped by the methods in which you garner extra points and regain health, which is done by holding the R2 button and pressing either square or triangle, which launches a brief quicktime sequence. It’s as frustrating as it is monotonous, with enemies often tagging you in the back midway through an animation that you have no hope of removing yourself from. This is only exacerbated throughout the later levels when the number of enemies increases, and in higher difficulties when there are more aggressive ones thrown into the mix as well.

Perhaps my biggest frustration in the game is the animations, truth be told. There were a number of moments when I found myself falling to my near-death thanks to a stubborn inability to do so much as change the direction you’re facing in mid-air, let along manipulate your path. There are some platforming sections that would test you in a game with tight controls, but unfortunately with the aforementioned “in flight” issue, it reduces itself to teeth-gnashingly frustrating at times. Coupled with this is the animation for the roll, which is a key mechanic to evade enemy attacks and set yourself up for a decent attacking position. The problem with it is that every time you go to do it (with a flick of the right analogue stick), there is a very slight stutter of a few frames, which breaks the flow of combat, or even just traversal, in such a way that makes what should be a nice flowing move becomes a stilted and annoying hurdle to overcome.

Another major complaint is the fact that the story isn’t very well explained. The game relies on the actions of Aarbron and the supporting cast to portray the narrative, but it does it without a word of spoken English throughout the gameplay. In fact, there is an option that you can unlock which will translate the subtitles that appear in game into English for you. The fact that the developers expect you can go through an entire game without unlocking the ability to understand the dialogue demands that the environmental storytelling be absolutely superb. Sadly, Beast’s isn’t quite there. The basics of the story aren’t conveyed without the need to go into an additional menu to view the cut scenes, and don’t really appear throughout normal gameplay. Instead, we’re given a bunch of generic looking cutscenes with our hero and a bunch of gibberish subtitles that don’t mean anything. Of course, you could unlock the subtitles, but there are a lot of languages to unlock, and each unlock will take away from some more combat upgrades that you could really do with. Of course, this is a game that essentially begs for multiple playthroughs, but I don’t know if I’ll go through it more than once due to the issues I’ve had with it.

A game that had the potential to not only evoke memories of a classic franchise, but also stand alone on its own two feet, Shadow of the Beast stumbles and doesn’t quite live up to the potential it clearly has. There are some lovely looking areas and when the combat sticks, it’s enjoyable. The problem is that there are more moments of pure frustration than delight, including control issues and that unfathomable decision to force you to unlock native language subtitles. If you’re after a blast of nostalgia and nothing else, however, the original 1989 title is included in the game as an unlockable, but this remake doesn’t really add much to the legacy of the franchise.

Thanks, I guess? Reviews are a matter of opinion, and there wasn’t much in this that kept me coming back to it. I ended up deleting it from my PS4 after finishing it, it just frustrated me

Sure, but the controls don’t really lend themselves to opinion. They either work as intended or they are broken. It seems like you never grasped the combat system. You’re not supposed to always just attack and go into the stylish animations. As the reddit post said, “timing and the type… Read more »

Everything lends itself to opinion, that’s the beauty of the world. Some people find uncharted 4’s shooting too loose and the controls a bit wayward, but I found them spot on. I certainly respect other opinions, but to me, the game felt clumsy and sluggish, and it wasn’t helped by… Read more »

Everything lends itself to opinion, that’s the beauty of the world. Some people find uncharted 4’s shooting too loose and the controls a bit wayward, but I found them spot on. I certainly respect other opinions, but to me, the game felt clumsy and sluggish, and it wasn’t helped by… Read more »