Frogwares made some bold strides in their first next-gen Sherlock Holmes title when they released Crimes & Punishments in late 2014, which certainly changed the series for the better. These most notably included moving to the Unreal engine for the first time, whucj allowed for a better looking title than ever before, and allowing players the freedom to choose who they thought was the culprit in each case – and whether they wanted to be lenient or strict with their sentencing. These changes made it feel like it was significantly different from previous entries in the Sherlock canon, and felt fresh enough to be labelled as a new era in the series. Sadly, after that breakthrough The Devil’s Daughter is more like a backwards step than a continuation of that evolution. 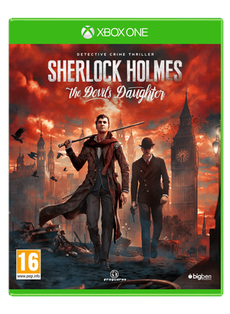 Right away you can see that Frogwares have tried to modernise Sherlock himself somewhat- without going as far as to change the setting. Gone is the austere Jeremy Brett inspired character model, and in comes a younger, more handsome replacement who sounds less of a stuffed shirt. Watson is also updated and rather than a bowler-hatted, slightly tubby older gentleman, guests at 221B Baker Street are greeted by the new Hipster Watson. One is fully aware of the reasoning behind these updates – it worked so well for the BBC and Guy Ritchie iterations – but in the game these alterations are thoroughly jarring, when you consider that nothing else in-game has been modernised thusly. As such it feels like change for changes’ sake, little more than a lazy attempt to ride on the coattails of the “modern” Holmes.

That aside, not a great deal has changed since last time out – glaringly so at times. One such example is the re-use of environmental models on several occasions, and the lack of detail on NPC characters remains a constant blight on the series. Character animation in general still feels very stilted at times and eyes are disturbingly strange. After a couple of years of working with the Unreal engine since Crimes & Punishments, one would hope for the visuals to be more polished overall. The lack of polish is present in the sound design too, where the voice-over work still leaves a great deal to be desired for most roles, and where the previous Sherlock actor was a pretty good fit, the new replacement provides a fairly lifeless delivery.

More changes can be found in the gameplay however, for better or worse. The most immediately obvious being the choice of two difficulty settings. The main change between the two being that you are timed for interrogations and observations in the harder mode, which certainly lends an air of tension and panic everytime. This won’t please the more slow and steady sleuths out there, but the option to spice things up and add a little challenge is a good one to have.

The game does hold your hand more than ever before in a lot of ways though. Whenever a new clue, location or suspect is discovered now, small icons will hint at what action needs to be taken next. These may suggest you analyse a clue, or tell you to use your archives to search for more information – but every time it points you in the direction of where to go next, regardless of the chosen difficulty. This does over simplify things at times, and definitely should have been left out of the Master Detective difficulty.

All other game mechanics are more or less unchanged – you can still use Sherlock Vision to spot hidden clues, use your imagination to work out what happened at a scene based on the evidence, and piece together clues using the Deduction board in order to reach your chosen conclusion. You can still choose from multiple culprits and make your own moral judgements – be they wrong or right – based on your own interpretation of the facts. These skills all give you the feeling that you are the world’s greatest Detective, possessing skills that no ordinary man has. And isn’t that what a Sherlock Holmes game should be doing? Making you feel powerful, not holding your hand?

Frogwares have also tried to add some variety into proceedings by including a greater number of mini-games to take part in throughout every case. These include shining shoes, a stealthy escape through the forest and sniffing out clues whilst controlling Holmes’ Bassett Hound Toby. Some are more successful than others and sadly the controls and plausible methods are never explained before the mini games. You are dropped into the thick of things and often have little time to work it out before you fail. Considering that quite a few quick time events are sprinkled in between these, a bit more help with simply knowing how to play would be useful, rather than the hints given in regards to clues.

Add to all of this some truly horrible long loading times cropping up whenever you move location and you can see why Sherlock Holmes: The Devil’s Daughter feels like a let-down. Crimes & Punishments was far from perfect, but it felt like clear progress – this latest effort feels like treading water at best. We need less evolution and more refining of what is already there. A rough diamond is preferable than a rough mess of new ideas. There are still some interestingly structured puzzles and involving cases to take part in, but the overall package is disappointing.