It’s been seven years since American developers, Sucker Punch, last brought the stealthy raccoon and his friends to life in the series’ third outing, Honour Amongst Thieves. Now, with Sanzaru Games taking the reins, the fourth iteration has finally arrived but with an age-old gaming recipe and a character that might not mean much to a new generation of gamers, can Sly successfully rekindle his old pilfering ways? Read on to find out. 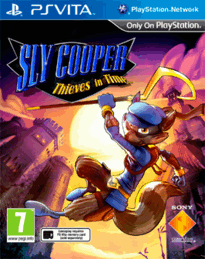 Fortunately, newcomers to the Sly Cooper series won’t feel too far out of the loop when it comes to the games narrative. The guys at Sanzaru have, it seems, made a large effort to fill in any gaps by reintroducing the cartoony cast to the gamer through lengthy opening scenes and tutorials. It’s just as well too; as it turns out the ‘Thievius Raccoonus’, a book documenting the Cooper clan’s lineage, has started losing it’s contents and with help of Sly’s diverse gang, you’ll set out through time to find out where it’s all disappearing to.

It goes without saying that whatever medium you’re partaking in, time travelling is fun – fact. Sly Cooper: Thieves in Time certainly doesn’t break that notion by having you delve into Sly’s ancestory throughout nicely cel-shaded locals such as Japan, Paris and old Aztec inspired levels. Infact, there’s little to complain about from a presentation perspective, especially for a handheld title; only at the games most hectic times will fluid frame rates be broken, whilst the colourful, family friendly visuals and characters seem fitting for the title and narrative they’re portraying. Saying that, there are times when the Vita’s right thumbstick plays an important role as you wrestle with the sometimes unwieldy camera angles – a saving grace that might have created problems on Sony’s previous handheld.

The platforming roots are still present in Sanzaru Games’ vision of the game world with each new location you visit in time being an open-ended map full of missions, bosses and collectables. However, there are twists on that foundation that vary depending on which character you’re controlling. For example Sly’s missions are based on stealth, whilst his buddy Murray presents a more straightforward bash-em-up and tech-head Bentley offers a slew of mini-games. What’s quite cool is the chance to control Sly’s ancestors and the new gameplay tweaks it brings with each; time slowing being the more interesting of the mechanics.

By creating so much variety it does stop things from becoming stale, despite Sly’s archetype being by far the most enjoyable compared to his counterparts. The mini-games in particular take you away from the platforming and are almost basic rehashes of something you might have found in an arcade years ago, some of which are better than others. One early example is a simple vehicle based shooter with its own power ups and key/lock puzzle elements – they’re overly simple but make a nice diversion if nothing else. Other distractions include treasures which demand you to haul it back to your hub within a time limit or lose it back to it’s original spot and coin hoarding for spending.

What’s a little disappointing is the lack of progression. New abilities that are usually discovered and taken forward remain with characters you play and in most cases, leave behind, when you leave for a new period in time. Upgrades and new fighting combos can be purchased in your hub but it still would have been nice to see more character building throughout. Another annoyance is perhaps the pretty steep loading times which are also frequent unless you’re simply exploring the open maps.

Those bugbears aside, there’s a solid amount of content to find in game, perhaps even fifteen hours plus if you get stuck into everything on offer. Cross-platform play is also a true bonus, meaning you’ll be able to continue the PlayStation 3 version straight from where you left off on the Vita and visa-versa, plus they’re both included in the price of one making it a great deal all-round.

Sly Cooper: Thieves in Time can be silly, unoriginal and for the most part, often overly leaning towards a younger crowd. However, with some excellent characters and gaming design, coupled alongside a whole heap of things to do and find, it’s difficult to not give credit where it’s due. Only the mish-mash of unchallenging gaming styles and a slight lack of evolution throughout your time in-game holds this iteration back, so overall Sanzaru Games have shown that there is still room for Sly and his companions in our current gaming landscape – for Vita owner’s especially.