It was almost three years ago at E3 2009, during their annual press conference, Sony revealed that they were working on motion controls for the PlayStation 3. The notion of high definition motion gaming for a core audience was teased and a year later at E3 2010 Sorcery was revealed. It promised one-to-one motion controls and was a prime example of what Sony would aim to deliver with with the Move. 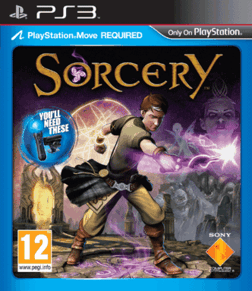 Sorcery tells the tale of a young apprentice named Finn and his quest to vanquish the Nightmare Queen. As you can imagine Finn is quite a capable spell weaver but things were not always that way. At the start of the game Finn is not even allowed to touch a wand  with master wizard, Dash threatening the young apprentice with chamber pot duty if he should cast spells unsupervised.  Finn is an ambitious apprentice and soon acquires a wand, daring to use it without the watchful eye of master Dash inevitably puts the young caster in a spot of bother.

On his journey from young apprentice to master sorcerer, Finn is joined by a talking cat by the name of Erline. Finn and Erline’s relationship is something straight out of a Disney movie which puts it in the mildly interesting category. Early on Finns every mistake is mocked by his female companion but as the young casters ability grows, so does Erline’s respect. Sorcery’s fairytale storyline is suited to a younger audience but whilst predictable can be enjoyed adults too.

Wizardry and magic is a colourful affair and Sorcery is no different, each spell at Finns disposal takes a different colour, from fiery red to cool blue, there is always something colorful at the end of the spell casters wand. Speaking of wands, the PlayStation Move controller glows purple to represent the default spell Arcane bolt whilst it switches to red when glugging a health potion and even glows green to represent the poly-morph potion. Sadly the Move controller does not change colour to replicate other spells, Earth, Ice, Wind, and Fire all miss out on a physical showing.

There are a couple of nice touches applied to Finn himself, items picked up on his adventures are stored on his person with items such as potions and an amulet in sight bobbing around the young sorcerer.

The handful of environments that exist in the game are varied enough, the crypts of the Restless Dead are suitably a shade of gloomy grey, whilst the emerald green of the Fae Forest emits a magical hue. Unfortunately whilst all the ingredients for a good looking game are present, technically Sorcery falls short, putting its overall look in the average department for this generation of consoles.  It is a little disappointing that a PlayStation 3 exclusive has not lived up to some of its predecessors, especially considering how far we are into the current life cycle and the fact that the games environments are rather small and seemingly self contained.

The best indication of good background music is when you hardly notice it all whilst you’re busy playong. We barely noticed it all, which must be a good thing, However, that could be because we were too busy listening to the quips thrown back and forth between Erline and Finn. The voice acting in Sorcery is better then expected and much like the story, the voice actors would not be out of place in a Disney movie.

Sorcery is played exclusively with the PlayStation Move, the navigation controller or a standard controller is required for player movement, but the real star of this show is the Move controller itself. It looks like a wand, it glows at the end like a wand, and waving it around is magic, that’s before we even get into the game. Once in things feel great, every movement of the motion controller is reflected in-game with Finn mimicking our every action, some motion games replace button presses with imprecise waggles but Sorcery utilizes the Move’s precision to bring us quick, responsive one-to-one controls.

Whilst controls are precise, the developers have leant a helping hand with a little bit of auto lock-on. Aiming to the right will generally hit a foe on the corresponding side of the screen. Dispatching enemies with a simple flick of the wrist feels good but Sorcery is at its best when there are a variety of foes to deal with at one time, it’s in these situations that multiple skills and wand techniques are required. Earth, Wind, Fire, Ice and Lightning are all available with primary and secondary abilities, these abilities in-turn can be combined in a variety of ways to create magical poetry with your wand. Fire can be laid down on the floor creating a damage barrier between yourself and whatever foe is trying to close distance. Shooting Arcane bolts through said fire will create fire balls that pack an extra punch, whilst sending a whirlwind through fire will create a firestorm.

Enemies vary too, you have your fair share of cannon fodder that die in just a hit or two which is important to maintain that all powerful feeling but you also have some stronger foes that will charger into melee range. Thankfully Finn has a shield which can be used to block incoming attacks and knock-back anything that gets too close. Ice and Fire Shamans are another threat, they tend to sit back using ranged attacks, some even hide behind cover which requires bolts to be curled around obstacles to reach their target, the addition of the skilled, curled shot is a welcome one as long as you can pull it off, which in our situation, was not always the case.

Bosses do exist and are used to bookend levels nicely, unfortunately most of the boss fights boil down to a big troll with a lot of health and one or two big attacks, the only interesting boss battle comes at the end of the game and even this is short lived.

The levels themselves are quite linear with the odd branching path here and there to offer a stash of gold and if you are lucky, treasure. It tends to be a case of entering an area with multiple enemies, clearing them out then moving on. Between battles the odd puzzle pops up but does little to challenge the mind of an experienced gamer. Some involve a quick spin of the Move to repair a bridge whilst others require certain spells to be used, for example the Ice spell can be used to freeze a lake whilst lightning can be used to control a stone golem.

Every game wants you the player to feel more powerful as you go progress and Sorcery is no different in that respect, the way in which upgrades are created however is quite different. On his adventure Finn comes across a number of rare alchemy ingredients which can be combined in a number of ways to create a wide variety of potions. Once researched, potions are created in a motion mini-game where ingredients are added to to an alchemy pot. Things like troll sweat are poured in, fairy dust is sprinkled and berries are crushed through a grinder, finally the pot is stirred and the potion is created. It may sound gimmicky but creating a new potion every now and then is actually quite relaxing and welcome break from all the manic wand action. Should you need any extra ingredients then all you need to do is visit the Alchemist, much like the ‘Merchant’ in Resident Evil 4, this portly fellow shows up mid level offering to buy Finn’s treasure and sell the magic user some extra ingredients and health potions.

Sorcery is a rather short lived experience, the story mode takes roughly 7 hours to complete and once you are done there are no other modes to traverse. To get your money’s worth you would need to complete the game multiple times on various difficulties but this is no Diablo III, the highest difficulty is not overly difficult and can be selected straight away. It is no wonder then that Sorcery is indeed a PlayStation 3 budget title available for roughly £25-30.

Good things come to those who wait, and that’s certainly the case when it comes to Sorcery. Sony has finally delivered a Move title that not only stands out from the crowd of party games, but feels good when played. Whilst it’s likely to appeal to a younger audience more, adults will probably end up enjoying it too. Its length and lack of extra modes make it slightly difficult to recommend as an instant purchase, but it’s certainly well worth a rental if you have that option available to you.