After a wait that seems like an eternity, Matt Stone and Trey Parker’s epic quest finally sees a release. With a long development history, fraught with a publisher’s demise, does this South Park game sparkle? Or is it comparable to the somewhat horrid after effects of a meal at Chipotle’s? 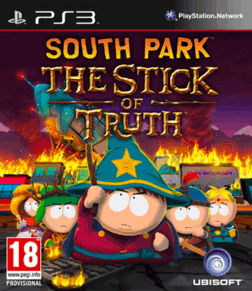 The children of South Park are at war. Elves battle the Humans, with the Goths, the Pirates and the kids who play Star Trek watching from the sidelines. The battle is over the Stick of Truth, with the owner gaining power over the entire universe. As the new kid in town, your parents task you with making friends, which leads to your actions becoming key in the struggle for the much sought after twig. In typical South Park style, all is not quite as it seems, and as a secret cover-up involving a popular fast food chain starts to unfold, only the New Kid and his trusty band of buddies know the full extent of the truth. With the vast majority of the cast of the show in place, it’s not long before the story takes several drastic turns for the ridiculous, and at times, the utterly disgusting.

As well as the story staying true to the show, Obsidian have absolutely nailed the look and feel of an episode, to the point where it could quite easily be broken up into half hour chunks, slipped into a season and nobody would know the difference. It’s a fantastic recreation of the town and its inhabitants, with the familiar stores, characters and other inhabitants all making appearances. If you are, or even have been a fan of the show, there is something for you in here. References are stuffed into drawers, hidden behind hedges, and even inside the anatomies of South Park residents! In terms of technical fidelity, the PS3 certainly suffers from a few frame rate hitches, particularly in the more open-world area of the town, but with the style of animation matching the show, this isn’t nearly as annoying as it could be with other games. I’m not excusing it in any way, but it’s definitely not a deal breaker.

What could be a deal breaker for some, however, is the much-publicised censored content. In two areas of the game, there are portions of gameplay cut out, only to be replaced by identical screens, some light hearted elevator music and an apologetic set of notes written by Matt and Trey. It’s not the first time this has happened (See the “Mohammed” incident in the show), but given the amount of other content in the game that could be considered equally as offensive and outrageous, it’s incredibly frustrating, particularly as one of the censored scenes actually comes into play during the late-game stages. It was mildly amusing at first to see the “sorry” screen, but by the time it had rolled round for the eighth time it was certainly a bit tiresome.

With that out of the way, the actual game itself is solid. Taking elements from simpler RPG’s such as the Mario & Luigi series and employing a turn-based system, the combat takes a little getting used to but it certainly works once you’ve got your head round it. Whilst the town of South Park isn’t the largest game world, there are quite a few surprises tucked away and it rarely feels like it’s lacking in ideas. Having said that, outside of the main quests, it feels a little anemic at times, with a heavy focus on fetch quests more than anything else. It would be nice to see a little more variety, particularly with a game that’s had this long a development cycle. There is a very fine line between “overly-hardcore RPG” and “accessible game” that The Stick Of Truth walks with great skill, with difficulty curves ramping up at the right moments in the game. I managed to get through the main story with a few side missions without getting into too much difficulty, picking up a large number of weapons and other items to help me along my path. There’s a good perk system that links into how many people you can befriend on Facebook, which is certainly an interesting mechanic, and encourages you to search out characters that may be hiding around South Park.

One of the biggest questions that’s arisen in the run up to the release of The Stick Of Truth is one of length. No, not the length of the “items” found in Ms Cartman’s bedside drawer, but gameplay length. I finished the main story quest, as well as a few side quests, in just over 11 hours. I never felt like I was rushing through the game, and was definitely trying to take my time exploring and investigating. There were still a few side quests left for me to do at the end, with a number of collectibles around the town to pick up, and a large number of folk to add to your friends list even after the conclusion of the story. With a couple of trophies and achievements to encourage multiple playthroughs, and specific things to do in the game, so those hunting for them will certainly find a bit more to do than those who just want to get the story out of the game.

It’s rare that video games do comedy well, but with the script for The Stick of Truth being written by the creators of the show, it pulls off this rare feat without a hitch. There were several instances that I had to pause the game because I was laughing so hard, and in one scene in particular I couldn’t believe what was happening on the screen whilst I was in the middle of a fight. The game is not afraid to throw punches rather than hold them, which makes it all the more frustrating to see the game censored in the way it has been for the EU console releases.

All in all, The Stick of Truth is akin to a season of the show in more ways than one. When the comedic punches land, they are frequent knockout blows, but there are also some misses, and with the inability to turn around the game as quickly as episodes, the satire that South Park is famed for is slightly dated at times. However, these moments are few and far between, and anyone who was looking forward to this game will not be disappointed with this faithful representation of the town, the boys, and everything in between. There are caveats to the excellence though, with the big one for PAL region console players being the censored areas. It’s a decision that boggles the mind, particularly when there is an awful lot of offensive material left in the game that most would consider worse than the content that’s been cut (including 2 trophies/achievements that actually include uncensored swearing in their names!). Additionally, the length of the game cannot compete with RPGs such as The Elder Scrolls or Fallout. However, this isn’t an Elder Scrolls game, it’s a South Park game. And boy fellas, it’s a great one!