Those precious few seconds just before you launch into the snow; evaluating the drop, picturing yourself soaring through the air, grabbing, kicking and dominating. Sucking in one last icy-cold breath before anything becomes possible and all hell breaks loose. Yes, the snowy slopes of SSX have returned and this time, they’re not holding back. 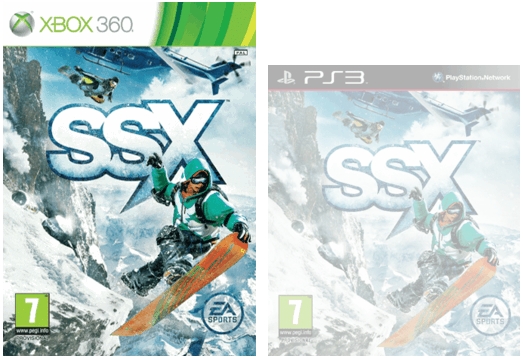 If you can manage to spare a second to catch a glimpse of the scenery as you tear your way down the courses, you’ll find SSX not wanting in the visual department. Sunlight flaring over the the horizon, endless rocky peaks and the sun-kissed snow are accentuated by excellent frame rates and smooth animation.

According to EA sports, the game’s developers were struggling to build convincing enough mountain ranges for SSX. So the natural course of action was to take real-life satellite data from NASA allowing a near-perfect representation of the 9 real world regions included in the game that range from Alaska and the Alps, all the way to the Himalayas. This sense of realism is lost slightly with EA Canada’s creative license splashed all over the mountains in the form of bright red rails and ice-laden tunnels, but there is a pleasingly natural look to the snowy peaks this time around that does add something new to the SSX experience.

There might be some predictability involved when it comes to the nature of an extreme sports game’s soundtrack. However, SSX’s implementation of its cool electronica and fun thumping soundtrack is superb. As you fly off a ramp and find yourself hovering in the air the music fades right down. Then once gravity has taken hold and you eventually hit the snow again, the beats kick back in like an injection of adrenaline and as a result every jump feels completely euphoric. EA has labeled its new on-the-fly sound mixing as the ‘harmony’ system and on top of the fading, it can skip music, speed it up, slow it down and even rewind it (as you rewind time), basically acting as a dynamic mixer that evolves with what’s happening on screen. What’s even more appealing is that it works with your own music too, so even all those old Cyndi Lauper tracks that have been burning a hole in your hard drive can be mixed up whilst you play. No? Just me then.

The World Tour mode is the game’s single player element and has you taking the role of several outrageously embellished boarders who all belong to team SSX – a team going through a bit of a slump as of late it seems. In an effort to turn their fortunes around they’ve decided to take on the nine ‘Deadly Descents’ before an old team member – Griff Simmons – spoils the party and beats them to it. It’s safe to say you won’t be finding any tales of heartbreak or touching coming of age stories. In spite of being totally forgettable, SSX’s plot does what it intends to do by giving the player a reason to take to the slopes, then just letting them get on with it – hallelujah.

One problem some might find is that SSX’s difficulty doesn’t stem from the snowboarding itself. Landing big air is simply a case of doing nothing, whilst even the most robust and neck-breaking tricks only require a simple movement of the new right stick control system or a tap of a button. The essence of the experience lies elsewhere – namely mastering input timing and knowing the course which in itself might put off some gamers who want to feel the reward of finally nailing a difficult trick or landing a big jump.

If that doesn’t bother you though there’s some great times to be had in-game. Although the tricks themselves require little skill, you’ll eventually have to stop waving the right stick around randomly and start being a bit more savvy with your approach. This is where SSX comes into its own and competition becomes rife as you endeavour to hit the big combinations and master SSX’s three main challenge events: Survive It, Trick It and Race It.

The events may differ in their goal but tricking is important in all modes as it fills your boost up, consequently allowing for bigger combos and bigger scores in the relevant events. As in some previous iterations, filling up the ‘tricky’ bar means you’ll be able to pull off even more ridiculous tricks and with SSX’s ultra-intuitive controls, even the standard tricks are all easy as pie to carry out – automated grinding and tricking off of helicopters included. Keeping combinations alive and knowing when to land and collect the points is another story entirely, essentially separating the great boarders from the not-so-great.

You’ll find the three challenge variants at each of the nine locations presented on a world map as you enter World Tour mode. At each new location you’re presented with a new character to race with (fans will welcome some familiar faces from older titles) and a set of events to compete in against an AI that does manage to provide a decent challenge. Do enough of these events and you’ll unlock that location’s Deadly Descent itself – a dangerous mountainous location that each holds a particularly lethal trait. For instance, treacherous ice, freezing temperatures and even avalanches will be nipping at your heels as you take on these intense slopes. Each one does well to make even your death defying abilities feel inadequate, so beforehand you’ll be advised by the game to equip tools that help you traverse the descent; ice-axes, armour and even the nonsensical wingsuits are amongst the usual boards and clothes you can upgrade with your earnings.

From time to time you will find some frustration in and amongst the plethora of courses you’ll ride, because SSX uses some rather cheap and unfair mechanics to end your run which further imposes the importance of knowing the course over skill. EA Canada were obviously well aware of this cheapness as SSX incorporates the ability to rewind the gameplay, meaning you can correct your course or keep that big combo rolling, albeit only a limited amount of times. Arguably, SSX might have benefited from being slightly less forgiving. Allowing sloppiness and poor timing with minimal punishment might only serve to effect long term interest for some. Luck also begins to creep in and play a bigger role, no more so than on slopes cloaked in darkness that will install a sense of relief once you’ve completed them and can move on.

Although you’ll be honing your skills in the World Tour mode, the addictive Explore and Global Events multiplayer modes will be where you end up spending a majority of your time. Every mode is linked by the ingenious RiderNet that will alert you about what your friends are up to, plus give you challenges and other updates on what’s happening in your SSX world.

Explore mode encourages you to dive in and set great times and scores on a number of the games slopes. All your scores will go onto leaderboards which your friends can attempt to beat and visa-versa. You’ll even be able to race against their ghosts (a recorded version of their run) which is not only a great way to compete, but a valuable insight into how they destroyed your last attempt. If you fail to beat their score, they’ll get the gloating rights as well as the in-game cash you could have won. Currency can also be gained in both modes by placing ‘Geotags’ for others to try and collect. You’ll want to place them well because the longer it takes for others to collect your tag, the more you earn.

Then there’s the Global Events mode in-which EA provides updated tournaments that are open to everyone. These tournaments give out a shared pot of winnings in reward brackets to players who post the best scores. Once you’ve paid an initial entry fee with your in-game currency you’re then free to have as many cracks at the course as you like in an attempt to reap the big rewards. Sadly there’s no real-time online multiplayer in its usual guise or even any local multiplayer which might disappoint some. However, RiderNet as a social platform gives SSX an edge, providing excellent drop-in play that not only allows you to compete regardless of whether other players are online or not, but is also utterly addictive and entertaining.

For the more dedicated boarder the World Tour mode’s nine locations might not take too long to conquer. Unlocking new gear and beating old times does offer some replay value and there’s still some fun to be had by just stepping back into the mode if you just fancy a quick blast down a slope. However, the longevity lies mainly in RiderNet and the two multiplayer modes that offer endless entertainment as you endeavour to beat friends scores and build up your cash kitty. With these modes and SSX’s drop-in at any time nature, this is a title that could easily last you right up until the next iteration.

Somewhere in the great beyond, Isaac Newton is throwing a hissy fit. That’s okay though, because thanks to this SSX reboot that restores some of the series’ charm, you’ll be too busy vicariously defying his life’s work to care. With a strong multiplayer and some excellent pick-up and play elements overshadowing the minor niggles and annoyances, SSX undoubtedly offers one of the more healthy and entertaining extreme sports experiences of this generation.

SSX’s visuals and gameplay are both keen to offer an immensely smooth ride from beginning to end with as few slips, stutters and broken bones as inhumanly possible. Throw in a dynamically evolving music system and you get an experience that’s so determined to keep you focused and immersed in the action at all times, you’ll be wanting to hit the slopes again and again. With SSX, idealism grabs its board and leaves realism at the starting gate, meaning that for those who are willing to go with it, one hell of a ride awaits.