There are undoubtedly many fans of Star Trek out there that heard a next-gen Star Trek title would be released this year. On top of that the latest films have sparked interest in the franchise from even the most unlikely of people. With a huge market to entertain, can Star Trek offer something for everyone? Read on to find out! 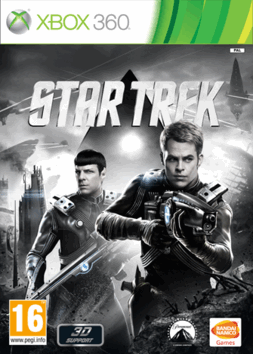 Well I must admit, I didn’t take on this review knowing I was about to play the best game in the history of everything, but Star Trek certainly exceeded my expectations… In being far worse than I could ever imagine!

I can sum it up in a mere few sentences. A female Vulcan named T’Mar has created a device called the Helios 1 that can tear rips in space. This unwittingly invites a lizard like race, known as the Gorn, to come through said rip and thus put the galaxy in danger of a Gorn themed pillage. The Gorn steal this device, kidnap T’Mar and head back through the rip. Guess who chooses to follow them?

If Star Trek was trying to add a love interest for Kirk with T’Mar, they really needed to do more than simply have her fall on him after a crash landing on The Enterprise. I don’t mean to sound like a film critic but I have seen more chemistry between Bowser and Princess Peach than Kirk and T’Mar.

As well as a host of overgrown gecko’s, one will also do battle against members or the Vulcan and Human Races that have been infected by some Gorn disease. This turns them into very aggressive folk who are smart enough to know they are attacking you against their will, but not smart enough to attack anything else. The infected enemies seem like an idea thought of during the morning coffee break, so tenuous is there involvement. The story is extremely generic and it has to be said that even that is being to kind.

It has been a while since I played with my G.I Joe toys but the shiny plastic look of everyone in the Star Trek universe made feel like I was 5 years old again. Adding to that memory by the second was that the characters faces barely ever changed. It was amazing that their mouths even moved while they were speaking.

Star Trek doesn’t do itself any favours either when it sends you running down corridor after corridor that look identical. Being a spaceship you can probably cut it some slack for this whilst you are on The Enterprise, but the Gorn home world doesn’t exactly offer any real variation either.

This is probably a good time to tell you that there are soooooo many bugs in this poor excuse of a game. A landing craft that is in the midst of crashing spins through one of its brethren offering no collateral damage, the AI (Kirk or Spock depending on who you chose to play through as) getting stuck inside countless walls, pillars, and doors, infected crew members weapons (usually some form of pole) vanishing into thin air when dropped. The most hilarious of these ridiculous bugs, happened during a rather important battle. Kirk stopped what he was doing and moonwalked his way back to the entrance of the room. It was there that he proceeded to run around in circles like a puppy chasing its tail! The list could literally go on and on and you will feel more like one of the QA team (I only know there was one due to the end credits) than the owner of a well constructed game.

Have you ever played a game where an orchestra seems to be rattling in your ears at every turn? I have. It’s called Star Trek. Even Digital Extremes were clearly not impressed by the attempt at heart racing music because every time you complete a checkpoint/mission the music and visual scene cut off so abruptly! The first few times it happened I thought it was the game giving up. No it turns it this is just how it was made.

On the plus side, the actors from the film are all doing their characters voice. The inevitable negative to accompany this is that all of the dialogue sounds so forced! I mentioned it earlier but there just never seems to be any real chemistry. The lip syncing is also not exactly great.

I won’t lie there were some moments that stirred the laughter in me, which was certainly a welcome reminder that there are good things in the world, but these were few and far between.

Awful. The first give away comes during the selection of who you will play as. Kirk – Brash, Bold, and Clever, or Spock – Tactical, precise, and logical. None of these attributes actually correlate to anything in-game. You get no special boosts for either character. The questions should have simply been do you want to run around in Yellow – Kirk or Blue – Spock?

When your are not having to move because the AI has pushed you off your chosen cover, you are struggling to get onto the piece you actually want. The cover system is also bizarre in that when you really don’t mean to leave cover that’s when you do so, but when you are trying to run down a stunned enemy for a silent take down, you seem inexplicably stuck to it.

The enemy AI almost negates the need for cover anyway. They can often be seen to just go balls out and run at you. The supposedly sensible ones trying to use cover, apparently don’t really know how to use it because they happily leave shootable extremities poking out.

As if it couldn’t get any worse Star Trek does try its hand at stealth sections. When you are not dealing with afore mentioned cover issues, you are having to worry about the AI. Yes you can instruct them to wait somewhere but they don’t always listen. Other times the AI will happily sit without your instruction and wait for the all clear. The inconsistency is infuriating! Whilst playing (as Spock thanks to the toss of a coin… he was ingeniously heads) there were times when I saw Kirk sit face to face with an enemy and not be spotted, yet moments later he would get spotted by the most unlikely enemy to do so, whilst in a good hiding place.

Throughout Star Trek you are offered the chance to do “Optional Missions” which are basically context sensitive to either being stealthy or not killing “infected” crew. If you fail the objective then you have to start again from the beginning of the checkpoint if you want to reset it. The non lethal missions are ridiculously easy but when it comes to stealth it is often much easier to take a leaf from the Gorn’s book and run in guns blazing. Other than missing out on so XP (used to up grade you phaser and tricorder) there is no penalty for failing the optional mission.

Gaining XP can also be done by scanning research items and completing mini games which are entered when you hack doors, turrets and consoles. These mini games don’t even deserve the title of “mini game” because they just aren’t fun. There is a glorified connect the dots, one which requires you to find and hold your analogue stick in a specific position for a while, and one which requires you to match sound waves together. None of these mini games are explained to you. This is ok in the sense that, for the most part, they are easy but the matching of sound waves isn’t obvious at first.

If you can convince a friend that misery loves company and get them to play then you may find it more enjoyable. You may also need to be a Jedi because it won’t be easy especially if you have mentioned the above.

What do you think? If it were any good then you may find yourself playing it twice to be both Kirk and Spock, but the lack of imagination in character types, means you will be hard pushed to do so.

The best part about Star Trek was that it ended. To be fair, a good old fashioned final boss battle was included, but it was no way near anything epic. I was so relieved to complete it knowing that I wouldn’t have to play it again.

If it had been made by a class of 1st year students studying games design then you would happily say bravo. Star Trek effectively looks and plays like it has training wheels on. It is safe to say that it has not boldly gone where no game has gone before.

You know you're a gamer when you live for the smell of a feshly opened game, mmmmmmm yes! I fell in love with games the day I was given a NES which came with Teenage Mutant Nunja Turtles and Mario Bros. Since then my tastes have developed and I'll happily play most genres, but I can tell you that scary games are a no go! I also try to avoid realistic racing titles. It's Mario Kart for the win!