After months of hype and nostalgic trailers, Star Wars Battlefront is finally here. Does it deliver an experience worthy of the classic movies, or is it a crushing disappointment like the newer ones? Well, thankfully, it’s good, but not without its flaws. 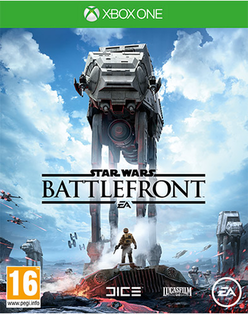 (Reviewed using my own Xbox One copy on live public servers)

From the off, it’s clear to see that DICE has poured its heart and soul into replicating the universe from the classic Star Wars trilogy. Its authenticity is unmatched. Whether you’re browsing the menus listening to John Williams’ epic score or running around the glorious forests of Endor as a speeder whizzes by, you’ll have no doubt that you’re playing a Star Wars game. The last part of that sentence might sound silly and somewhat obvious, but it’s never been executed with such style or panache. If you’re a long time fan, playing Star Wars Battlefront is like having your childhood fantasies come to life in one fell swoop. Fight alongside Luke Skywalker or Darth Vader on Hoth? Check. Take on Luke Skywalker or Darth Vader? Check. Fight as Luke Skywalker or Darth Vader? Check. Fly around in an X-Wing or the Millennium Falcon? Uh huh. Take down an AT-AT? You bet. The occasional bout of goosebumps and a massive smile are pretty much guaranteed.

A big part of why the game has this effect on you is the presentation. It’s no exaggeration when I say that both the visuals and audio in Star Wars Battlefront are great. Sure, on the Xbox One the game runs at a lower resolution (720p), but still manages to capture the essence of Star Wars with ease while moving at fairly solid 60fps. The latter is especially impressive during the 40 player battles in the Walker Assault and Supremacy game modes (more on them later). Hoth is an obvious highlight, but Endor is the star of the show with its streams of water, foliage and structures that house the tiny Ewoks. It’s a sight to behold and (sorry for the graphic image about to pop in your head) a Star Wars fan’s wet dream. Audio is similarly impressive, with everything from John Williams’ iconic music to the ‘pew pew’ sound from blasters wonderfully correct and present. Yeah, it’s fair to say, DICE has nailed the Star Wars look and feel. Oh and there’s no lag either. I had a buttery smooth experience throughout.

As authentic as it all is though, even if you’re the biggest fan, at some point the Star Wars part of the package will start to wear off a little. It’s only natural. Once it does, the modes, maps and gameplay that hold it all together begin to creak a little. Out of the nine modes, two are undoubtedly shine brightly than the others. I’m, of course, talking about Walker Assault and Supremacy. These modes, featuring up to 40 human players, represent what Star Wars Battlefront is all about. Tasked with defending or taking down AT-ATs and capturing points respectively, both modes capture the chaotic yet engrossing nature of battles from the movies. You know, the stuff you dreamed of being part of as a kid and still do. You feel like you’re taking part in something epic, with your every action having an impact on the final result. Power ups littered across the map mean you can occasionally become a hero or villain, fly a Tie Fighter or X-Wing and even shoot down enemies from an AT-AT. Flying is a bit of a chore given the size of the maps in relation to the crafts, but everything else is just as fun as it sounds.

Sadly, the other seven modes are less enjoyable, even Fighter Squadron. It’s a shame, because it should stand beside Walker Assault and Supremacy as one of the best, but once the initial buzz of flying a Tie Fighter or X-Wing wears off it’s quite simply boring. There’s no real sense of speed or scale about the aerial battles. Instead, you just feel like you’re going through the motions rather than being involved in something epic. Elsewhere, you have Blast (team deathmatch), Drop Zone (battle to capture pods), Hero Hunt (kill the hero to become one), Cargo (capture the flag), Droid Run (domination) and Heroes vs Villains (exactly what it says on the tin). None of these modes match up to the 40 player battles in terms of delivering that Star Wars feeling, but I can see people enjoying one enough to play alongside Walker Assault and Supremacy. Personally, I quite enjoyed Heroes vs Villains, mainly because I got to try out playing as Han Solo, Princess Leia, Boba Fett and The Emperor. None of them are quite as fun as controlling Luke Skywalker or Darth Vader, but still pretty cool nonetheless. Plus, playing as a normal Rebel or Empire grunt and trying to defend or take out one of the Star Wars big boys is surprisingly enjoyable, even if you die.

That being said, lack of Star Wars spectacle aside, the main reason these other modes suffer is because in the cold light of day the gunplay in Battlefront is okay at best. Shooters like Call of Duty: Black Ops III and Halo 5 feel much better when you fire a weapon. The gunplay has some real oomph to it, whereas here it feels a tad weightless. Walker Assault and Supremacy cover up the cracks, making up for it in sheer spectacle, but the other modes don’t have that luxury. When the focus lies solely on the shooting, Battlefront shows its flaws. This is most apparent when playing in the first-person view, the side of Battlefront that’s been shown off in the majority of actual pre-release gameplay footage. Switching to third-person alleviates this issue somewhat as you’re able to see your character and get a feel of the gunplay a little bit more. In fact, I’d go as far as saying the game is best played in third-person. The game just looks and feels a whole lot better.

Elsewhere, even though Star Wars Battlefront is primarily an online multiplayer game, there are a few offline modes included in the package. Three to be exact, broken down into Training, Battles (take on the AI or a friend) and Survival (single player or co-op horde mode). There’s no story mode (there’s a separate team working on that game), and that’s fine, but what’s present was barely worth adding in the first place. Battle and Survival are two quite generic modes, with the latter heightened ever so slightly by the addition of online or local co-op. Ironically, Training delivers the offline modes best moments, with Endor Chase putting you in a speeder and Invasion tasking you with stopping walkers on Hoth with a T-47. It’s the closest you’ll come to anything campaign or story related in Star Wars Battlefront, with the speeder mission providing some genuine thrills.

That leads me on nicely to my main issue with Star Wars Battlefront, its staying power. Out of the box, the game comes with nine online modes and 12 maps covering five different locations. Taking into account what I said before about Walker Assault and Supremacy being the highlight modes, that’s not a lot of content for a game that is all about the online multiplayer. Hey, but there are 12 maps, right? Well, yes, but not all the maps cover all the modes. After playing the game for 10 hours, I only experienced six maps. That’s after covering all the modes by the way. Focusing just on Walker Assault and Supremacy, I only ever played on one of three maps (Hoth, Endor and Sorosuub Centroplex).  There’s a clear lack of content, a fact that is going to hurt the game in the long run. Yes, there’s a season pass coming that will throw in four new game modes and 16 new maps, but I can’t help feel the majority (if not all) of that content should’ve been shipped with the game on launch. Instead, you’re going to have to spend another £40 to get more content over time.

The promise of unlocking weapons, grenades and other gadgets via credits you earn give the game some much needed legs. However, given that the majority of guns feel the same when you’re shooting, they’re not huge stretchy legs by any means. The default Blaster is arguably the best one in the game, whereas Star Wars equivalent of shotguns are more or less useless given the best modes cover large, long distance battles. It’s the unlocks that recharge over time that you’ll want to focus on rather the main weapons, as they offer more interesting and useful options in battle. For example, you’ll want to get access to the Jump Pack as soon as possible so you can cover long distances with one simple button press. Oh and the Pulse Cannon (essentially a cool sniper rifle) is incredibly useful too. Appearance unlocks are present, and there’s a neat little Diorama to fill up to by completing a few different challenges too. Ultimately though, even with the incredibly impressive Star Wars bells and whistles, once you get over the buzz, Battlefront is a decent (at times very good) but flawed shooter.

There’s no doubt about it, this is the most authentic Star Wars game to date. DICE has absolutely nailed the look and feel of the original trilogy. It’s a Star Wars fan’s wet dream. Playing Walker Assault and Supremacy, you’ll have some fantastic moments. However, once you get over that (and you will), you’ll come to realise there’s a distinct lack of content and the gunplay isn’t that great. For a game pushed as a first-person shooter, it’s actually better played in third-person. That said, if you focus on its two best modes, Star Wars Battlefront is lots of fun. I just wish there was more to get stuck into and enjoy.

I really agree with the lack of ‘weight’ in gun-play. From what I played in the beta it felt really flimsy, which is odd considering it’s coming from a similar place to a battlefield franchise that kicks like hell for the most part. I’ll buy anyway, just for the star… Read more »

Definitely still worth a buy.

Yup, gunplay is very basic. Still, as you said, if you’re into Star Wars… Worth a buy. Plus, it’s a fun game.